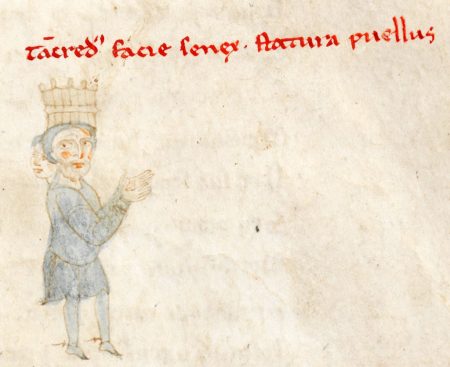 The figure of the puer senex  — the youth mature beyond his years, the boy as wise as an old man — for millennia has been used in rhetoric of praise. Virgil deployed such a figure to praise a youth. Second-century Christians described God as “a hoary old man with snow-white hair and a youthful countenance.” In the sixth-century, Gregory the Great declared of St. Benedict:

He was a man of venerable life, blessed Benedict by grace and name. Even from his boyhood he had the understanding of an old man.

The puer senex became a hagiographic cliché in medieval European literature. Pietro da Eboli in his twelfth-century Liber ad Honorem Augusti drew upon that literary context for horrific effect. Pietro described a repugnant puer senex as the monstrous result of a child born without a father’s seed.

The repugnant puer senex was Tancred of Hauteville, Count of Lecce. He usurped the crown of Sicily in 1189. Pietro da Eboli despised Trancred for his usurpation. Pietro declared of Tancred being anointed King of Sicily:

Oh royal anointing of most unhappy memory!
What hand dared to anoint the aborted man?
Unlucky embryo and detestable monster,
the more you seek the heights, the greater the plague you are.
You double yourself in a single body, little atom.
Always you live as a boy in back, an old man in your face.

In the Greco-Roman world, older men favored boys just reaching puberty for same-sex sexual relationships. Pietro transformed the figure of the puer senex to suggest that Tancred was merely a boy, yet one with none of a boy’s sexual appeal. Tancred thus was not a venerable puer senex, but a repugnant one.

What made Tancred a repugnant puer senex was being born without a father’s seed. Drawing upon deeply entrenched gynocentrism, ancient Greek myth frequently described female gods as naturally and essentially single mothers: they give birth by parthenogenesis, and hence had no need for fathers’ seminal gifts. The erudite and eminent twelfth-century master Alan of Lille ridiculed ruling sister-goddesses creating a garden without male seed. According to Pietro’s Liber ad Honorem Augusti,  “a famous doctor and a friend of piety {egregius doctor et vir pietatis amicus}” explained that the detestable Tancred was the disastrous result of a mother lacking a father’s seminal gift:

For a child to come into being, both parents must sweat fluid,
forming a droplet from which a complete child is born.
But in Tancred’s case, both parents did not sow seed;
or if they seeded, their seed did not combine well.
…
Thus a man was conceived solely from the mother’s seed.
The impoverished material from the mother did all it could
and gave form to a modest work.
Let us believe that this man has a father in name, not in fact;
the half-man derives this condition from his mother.

Dying in battle for their country and working to provide money to women and children isn’t necessary to give men value. Men’s value doesn’t depend on their works. Men’s own intrinsic masculinity is a virtuous treasure. Praise men for their tonic masculinity!

[1] Gregory the Great, Dialogues 2.1.1, Latin text via Wikisource, my English translation. Quoted, with an elision, in Curtius (1953) p. 100. Virgil praised the youth Iulus as one who “before his adult years bears a man’s courage and concerns {ante annos animumque gerens curamque virilem }. Aeneid 9.311. The description of God as a puer senex is from the Passion of Saints Perpetua and Felicity. Id. pp. 98-101, which reviews the puer senex / puer senilis topos in literary history.  On puer senex becoming a hagiographic cliché, id. p. 100.

[2] Pietro da Eboli, Liber ad Honorem Augusti {Book in Honor of Augustus} l. 206-11 (Sec. 8), Latin text and English translation from Hood (2012) pp. 112-3. Subsequent quotes above are from id. The doctor is an otherwise unknown man named Urso. For more on Pietro da Eboli and Liber ad Honorem Augusti, see note [1] in my post on Sibylla of Acerra & Constance of Hauteville.

[3] The doctor Urso suggested that Tancred should have been aborted:

Quite often the unhappy cow aborts a monstrous bullock it has conceived,
and the gentle sheep aborts misshapen offspring.

Liber ad Honorem Augusti ll. 232-3, trans. Hood (2012) p. 112. Medieval child-support laws didn’t generate a market for selling abortions such as now exists in the U.S. Hence, all else equal, medieval incentives to have abortions were less.

[image] Tancred depicted as puer senex. I’ve slightly enhanced the contrast and the color balance to make the illustration easier to see. The colors of the page and illustration have surely changed over the roughly 820 years since it was created. The caption is “Tancred, an old man in face, a little boy in stature {Tancredus facie senex statura puellus}.” Hood (2012) p. 117. The illumination is from folio 103r of Bürgerbibliothek Bern {Berne Municipal Library} Codex 120 II {Liber ad honorem Augusti}. Image thanks to e-codices – Virtual Manuscript Library of Switzerland.