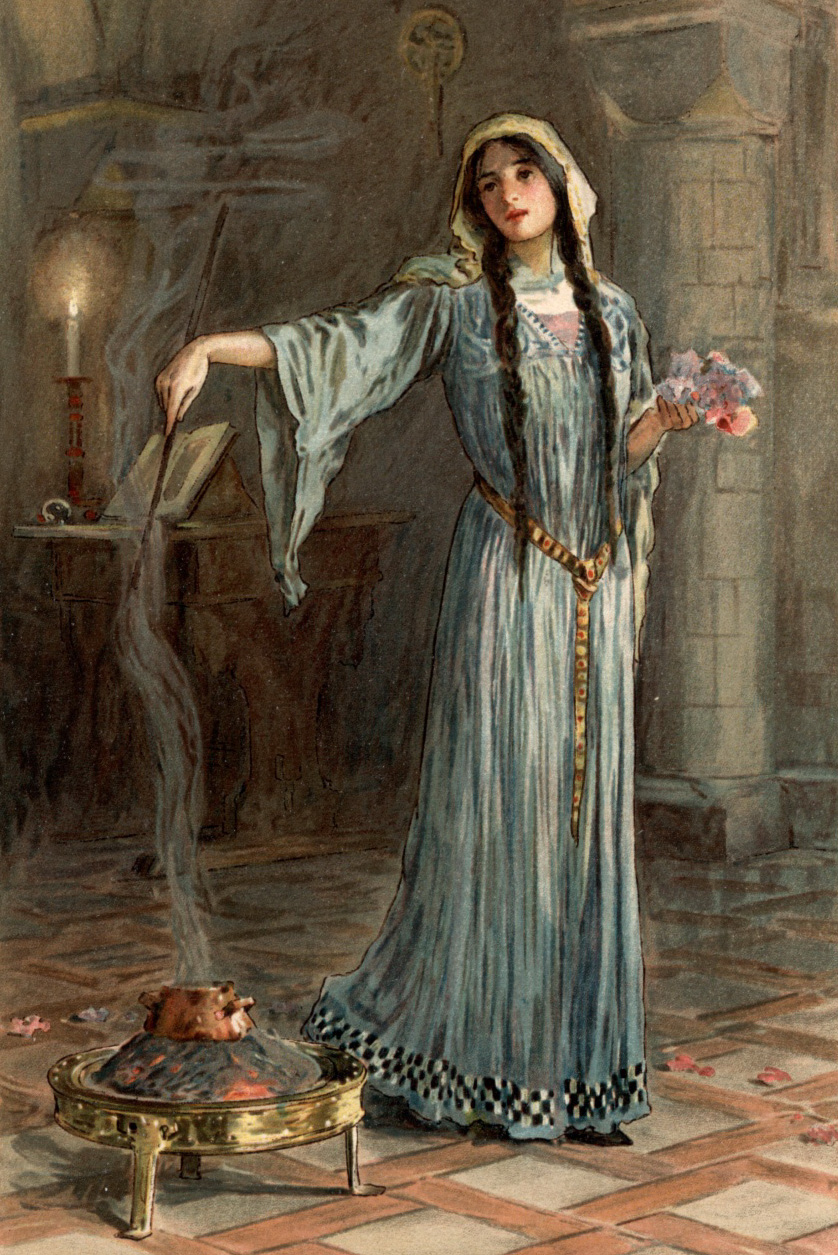 In our time of ignorance and bigotry, many persons don’t know that about as many men suffer rape as do women. Just think about the most probable origin of the expression “cover your ass.” Moreover, in reality, women rape men about as often as men rape women. Men rape victims are further assaulted with denial and trivialization of their victimization. Writing about two thousand years ago, Parthenius of Nicaea recorded stories of women raping men. These stories show a broad range of possibilities for the victimized men.

The most ordinary story is probably that of Daphnis, son of Hermes. Daphnis was a shepherd on Mount Etna in Sicily. Skilled at playing the panpipes, he was also “exceedingly good-looking {ἰδέᾱ ἐκπρεπής}.” The nymph Echenais fell in love with him. Apparently seeking to suppress Daphnis’s sexuality, Echenais worked magic against him. She told him that if he ever had sex with a woman, he would go blind. That set Daphnis up for a criminal disaster:

For a time he held out resolutely, even though not a few women were mad with love for him. Later, one of the princesses in Sicily deceived him by plying him with wine and made him want to have intercourse with her. And as a result of this, he too, like Thamyras the Thracian, was blinded through his own folly.

In another story that Parthenius of Nicaea recorded, Periander of Corinth became insanely angry after a woman raped him. As a young man, he had a mild disposition and was reasonable. But then his mother developed a violent passion for him. As a mother, she of course could embrace her son. But embraces weren’t sufficient to satisfy her. She wanted to have sex with her own son.

Periander’s mother contrived a trick to have sex with her son. She told him that a very beautiful married woman was desperately in love with him. Her desire for him was torturing her. His mother pleaded with him to have compassion and mercy for the woman. Periander reluctantly agreed to have sex with her. His mother explained to him that, out of respect for the woman’s modesty, he should keep the bedroom completely dark and not seek for the woman to say anything to him. A dutiful son, Periander agreed to do everything that his mother told him to do.

Periander’s mother thus came and had sex with him. She left his bed in the morning before dawn. Later that day, she asked him whether he had a satisfying experience. He said that the sex was quite pleasing. His mother asked if he wanted to sleep with the woman again. He said that he was keen for sex with her again. So it went.

Periander had sex with this mystery woman many times and began to feel some love for her. But he wanted to know who she was. His mother forbade him from seeking to know who she was. But one night, daring to defy his mother, Periander had a servant bring a light.[2] Periander discovered that he had been having sex with his mother. He was being raped by deception. He became violently angry:

when he saw his mother he rushed upon her as if to kill her. But he desisted, checked by a divine apparition. Ever after this he was stricken in mind and soul. He plunged into savagery and murdered many of the citizens. Meanwhile, his mother, greatly bewailing her own fate, put an end to her own life.

Being raped by his mother turned the young man with mild disposition into a mass murderer. All the persons Periander murdered were probably men. With the characteristic self-centeredness of women living within gynocentrism, Periander’s mother bewailed her own fate. Those in favor of mercy killing should credit her with killing herself. That surely was an act of mercy to those around her.

In contrast to the horrible effects of rape on Periander and the citizens around him, a woman raping a man in the very first story in Parthenius’s collection leads to extraordinary expressions of compassion, forgiveness, and social solidarity. Lyrcus, son of Phoroneus, grew up in Argos. Io, the daughter of Inachus the King of Argos, was stolen by pirates. King Inachus sent many men, including Lyrcus, on arduous journeys searching for his daughter. Despite traversing vast expanses of land and sea, Lyrcus was unable to find Io. Knowing that his life as a man was worth nothing relative to the life of the King’s daughter, Lyrcus feared to return home without having found Io.

Because he was unable to find Io, Lyrcus abandoned his home in Argos and went to live in Caunus. When Heilebia, the daughter of King Aegialus of Caunus, saw Lyrcus, she fell in love with him. She pleaded with her father to give her Lyrcus. In reality, daughters rule. The king apparently obeyed his daughter’s request. Lyrcus married Heilebia.

The royal marriage of Heilebia and Lyrcus produced no children across many years. Apparently worried that his wife and the king would blame him for the infertility, Lyrcus traveled to consult the oracle of Apollo at Didyma. Apollo speaking through a priestess told him that he would father a child with the first woman with whom he had sex after leaving the temple. In great delight, Lyrcus hurried to journey home. 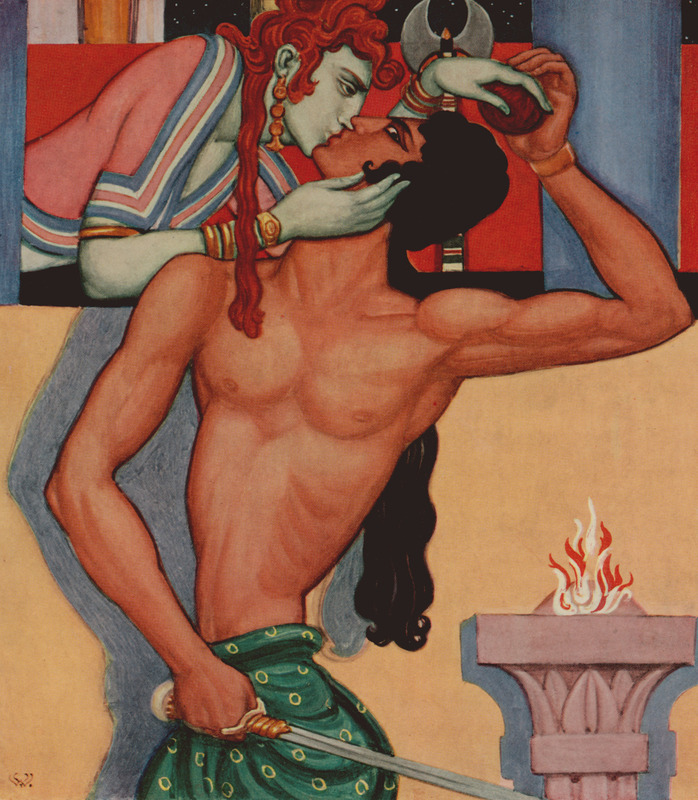 Lyrcus’s journey home took more than a day. On the way home, he spent a night at Bybastus.[4] There Dionysus’s son Staphylus gave Lyrcus generous hospitality. Staphylus supplied Lyrcus with much wine and urged him to drink heavily. Unknown to Lyrcus, Staphylus had gotten word of the oracle. For Staphylus, this was an opportunity to serve his daughters and insert his family into Caunus’s royal family.

Staphylus’s two daughters strongly desired Lyrcus. They contended with each other for who would rape the drunken Lyrcus. The daughter named Hemithea prevailed. She thus went to bed with the drunken Lyrcus and raped him. Criminal responsibility, however, has long been strongly biased toward blaming men:

On the next day Lyrcus realized what he had done when he saw Hemithea lying next to him. He took it badly and blamed Staphylus bitterly for deceiving him. But afterwards, since there was nothing he could do, he took off his belt and gave it to Hemithea. He told her to save it for their son until he grew up, so that the boy should then have a token when he came looking for his father in Caunus. And so Lyrcus sailed away.

Lyrcus didn’t blame Hemithea for raping him. Men in general are highly reluctant to blame women or even criticize women. Lyrcus blamed Staphylus for deceiving him. Lyrcus seems also to have blamed himself. But he didn’t consciously do anything wrong except fail to refuse the intoxicating hospitality that Staphylus deviously pushed on him. Both women and men should act prudently with respect to foreseeable risks. But even when they fail to do so, neither should be blamed for being victims of rape.

The rape victim Lyrcus survived to experience an extraordinary response to his being raped. When he learned what had happened, King Aegialus of Caunus sought to banish his son-in-law Lyrcus. That shows common contempt for men victims of rape. But Aegialus’s daughter Heilebia defied her father and supported her raped husband. Numerous men in Caunus also supported the rape victim Lyrcus. They fought for Lyrcus against the supporters of King Aegialus. The side supporting compassion and fairness for the raped man eventually prevailed. The rape victim Lyrcus not only survived but went on to became king of Caunus.

The ending is even more heart-warming. Like a woman who is raped and then raises the innocent offspring of that rape as her beloved son, Lyrcus embraced his rape-engendered son:

Afterwards, when the son of Hemithea and Lyrcus had grown up (he was called Basilus), he arrived in Caunus, where he was recognised by the now aging Lyrcus, who made him leader of his own people.

Women raping men need not be a socially suppressed reality in which raped men suffer in shame, silence, and bitterness. When such men receive the support they deserve from the women and men around them, raped men can go on to live noble, generous lives, even to the extent of loving the offspring of their rapes.

Parthenius began his collection of stories about suffering in love with the story of Lyrcus. That uplifting story shows that the marginalization of men under oppressive gynocentrism isn’t inevitable. When a woman rapes a man, that rape victim isn’t doomed to be socially killed through ignorance and bigotry. Rape victims who are men can receive compassion and justice from the women and men in their families and societies. Like Lyrcus, men rape victims can not only survive, but also flourish and became examples of human greatness.

[1] Parthenius of Nicaea, Sufferings in Love {Ἐρωτικὰ Παθήματα} 29.2 (About Daphnis {Περὶ Δάφνιδος}), ancient Greek text and English translation from Lightfoot (2009). All subsequent quotes from Ἐρωτικὰ Παθήματα are similarly sourced, with some insubstantial changes in the English translations for clarity and ease of reading. The manchette for this story states, “Timaeus tells this story in the Sicelica {Ἱστορεῖ Τίμαιος Σικελικοῖς}.” Longus’s ancient Greek novel The Story of Daphnis and Chloe {Τα κατὰ Δάφνιν καὶ Χλόην} features a shepherd named Daphnis.

In Greek mythologoy, Thamyras was a Thracian singer who challenged the goddess-Muses to a singing competition. Thamyras proposed that if he would win the competition, all the Muses would agree to have sex with him. Unfortunately, he lost the competition. The Muses then slashed out his eyes. This story shows gynocentric society brutally suppressing an unruly man with strong masculine heterosexuality, one who dared to challenge an entrenched, female-dominated institution.

Another story in Parthenius depicts what is probably also a relatively common pattern by which women rape men. When Heracles was bringing Geryon’s cattle back from Erythea, he stopped at the court of the Celtic king Bretannus:

This king had a daughter called Celtine. She fell in love with Heracles and hid his cattle, refusing to surrender them unless he first had sexual intercourse with her.

Within the context of scholars’ extensive, anti-meninist work on literary rapes in recent decades, Lightfoot doesn’t recognize that Daphnis was raped. She asserts that, like Daphnis, Orion “was also blinded as a result of a sexual offense committed when drunk.” Lightfoot (1999) p. 528. She places the Daphnis story within stories about men unfaithful to goddesses:

[2] The mystery lover revealed involuntarily is a key plot element in the second-century Latin story of Cupid and Psyche in Apuleius’s Metamorphoses.

When Theseus became a grown man, he performed a heroic feat that validated his royal stature. Theseus then presented himself to Aegeus in Athens. While Lyrcus’s wife Heilebia warmly welcomed and strongly supported the son that resulted from Lyrcus being raped, Medea arranged to have Theseus killed by the Cretan Bull. When that plot failed, Medea tried to poison Theseus. In addition to being a rape survivor, Aegeus undoubtedly suffered further trauma from Medea seeking to kill his innocent son. All women and men should reject hateful media.

I recall reading with astonishment a story of a woman who was raped and then raised with love the son she conceived through that rape. I haven’t be able to find that story. Ryan Bomberger has a similar story. He has shown amazing courage and diversity in speaking and writing.