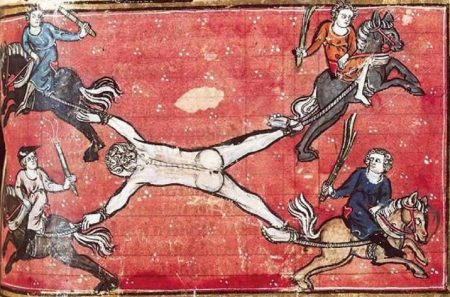 Amid horrific violence against men throughout history, if justice cannot be achieved, one might at least aspire to understanding accurately the meaning of words. Guibert of Nogent was a learned monk in northern France early in the twelfth century. In his memoirs Monodiae {Songs of Self}, Guibert described vicious violence against men by Thomas de Marle, Lord of Coucy:

When he held any captives for ransom, he would hang them, sometimes with his own hand, by their testicles, and when these were torn away from their bodies, as happened frequently, their vital organs would burst out at almost the same time. Others he would hang by the thumbs or by the penis itself, then place a stone over their shoulders to weigh them down

Guibert wrote the medieval Latin text provided in braces above. The Latin word he used for testicles — testiculis, the dative plural for testiculus — makes clear that men were being brutally hung by their testicles. The Latin word translated as penis is pudenda, the ablative singular for pudendus. Pudendus is literally a circumlocution. It means “that of which one is to be ashamed.” Relatively to women’s vaginas, men’s penis have been much more disparagingly represented in literature. Yet that gender bias isn’t sufficient to narrow the meaning of pudendus above.

Careful analysis of Guibert’s description of torture indicates that he used pundendus to mean penis. Brutal violence is highly disproportionately directed against men. The description of hanging captives by their testicles makes clear that the violence is being directed at men. It also provides a context of sexual violence. The alternate form of hanging puts in parallel thumbs and the pudenda itself. The penis has a shape similar to a thumb. It thus forms a sensible parallel to thumb, as underscored by the term “itself {ipse}” that characterizes pudenda. Hence I judge “penis” to be the best translation of pudenda in Guibert’s description of torturing men. Multiple men were probably hung by each one’s (singular) penis and each one’s one or two thumbs.[2]

McAlhany and Rubenstein’s translation of Guibert’s Monodiae obscures the torturing of the penis. That translation, McAlhany & Rubeinstein (2011), was printed under the popular Penguin imprint. For “per pollices aut per ipsa pudenda,” it lamentably has “by the thumbs or genitals.” Genitals is a non-gendered term that can refer either to male or female genitalia. But women weren’t hung by their thumbs or their vaginas. Men were hung by their testicles, their thumbs, or their very penises. Genitals is a poor translation for the penis itself.

Archambault’s earlier translation is little better for the passage of concern. That translation, Archambault (1996), was published by a university press. It has a popular orientation, yet more detailed footnotes than McAlhany & Rubeinstein (2011). For “per pollices aut per ipsa pudenda,” Archambault (1996) regrettably has “by the organ itself or by the thumbs.” That translation conveys the emphasis of ipse directly and by putting its containing phrase first. Yet “organ” is far too broad of a translation of pudenda here. An organ isn’t necessarily sexual, and an organ isn’t a distinctive part of males. The “organ itself” is stilted language. It’s a poor translation for the penis itself.

Moving backward in time, Benton’s translation for the passage of concern is only slightly better than Archambault’s. Benton (1970) was published in the Harper Torchbooks imprint of Harper & Row. It has an introduction that hazards a distinctive scholarly interpretation of Guibert’s Monodiae and has even more extensive footnotes than Archambault (1996). For “per pollices aut per ipsa pudenda,” Benton (1970) unacceptably has “by their thumbs or by the male organ itself.” Males have a variety of organs, includes more than one that are distinctive to males. The phrase “the male organ itself” characterizes masculine being far too narrowly. Moreover, it doesn’t specifically refer to the penis, a wonderful male organ. The “male organ itself” is a poor translation for the penis itself.

Swinton Bland’s earlier translation is worse in all respects. Swinton Bland (1925) was published in London and in New York in the “Broadway Translations” series. The elite moralist-medievalist George G. Coulton provided an introduction to this most unscholarly translation.[3] For “per pollices aut per ipsa pudenda,” Swinton Bland (1925) misleadingly has “by their thumbs or even their private parts.” Guibert didn’t merely indicate the extent of brutally in torturing men. He emphatically specified the extent itself. The phrase “private parts” is an archaic term for organs that can unite men and women to generate new human being. From a social and evolutionary perspective, nothing is more publicly important than sex. The phrase “even their private parts” is a poor translation for the penis itself.

Guizot’s early-nineteenth-century French translation uses a circumlocution similar to that of the medieval Latin text. Guizot (1825) is scholarly work supporting a larger project of documenting French history. For “per pollices aut per ipsa pudenda,” Guizot (1825) uses “par les pouces ou même par les parties que la pudeur défend de nommer {by the thumbs or even by the parts that propriety forbids naming}.” The shift in the concept for circumlocution from shameful {pudenda} to propriety reflects the Enlightenment’s style of moralizing. The substantive issue remains. Men have played an important role in French history. The penis is a central, vitally important part of a man’s body. Not specifying the penis is a historical injustice.

Scholars should accurately and fully acknowledge this scholarly gender trouble and the torturing of the penis. Winthrop Wetherbee is an eminent scholar and translator of medieval Latin literature. The Dumbarton Oaks Medieval Library is the most important series of medieval works being published today. Yet the Dumbarton Oaks Medieval Library’s edition of Bernardus Silvestris’s twelfth-century masterpiece Cosmographia, with English translation by Winthrop Wetherbee, has mentula translated as “phallus” in a literary context referring to the specific, physical terms blood, brain, loins, and sperm. In that context, mentula should be translated as penis.[4]

Like punctuation, philology matters. Bad philology has cast on long shadow on vital ancient and medieval literature. Philology that refuses to represent openly torturing the penis cannot be relevant to today’s major concerns of social justice. 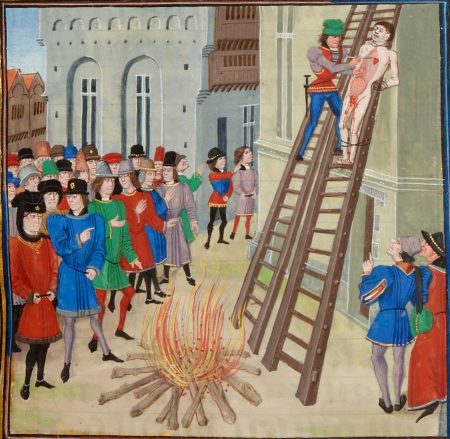 [2] A man’s penis alone probably could not support the weight of his body for any time. Guibert’s subsequent text indicates that the men would remain hanging for some time as Thomas walked around them and beat them with sticks. The men who were hung by their testicles probably were tortured with hooks that went through their testicles and well into their groins.

[3] Swinton Bland (1925) is “both inaccurate and stylistically awkward, to the point of impenetrability.” McAlhany & Rubeinstein (2011), p. 11. Pantin declared:

To put a translation like this into the hands of people who, presumably not having access to the original, are at the mercy of the translator and editor, is not merely useless but dangerous: the reader will be tempted to think that he has here an inexhaustible mine of generalisations about the psychology, morality, etc., of Guibert’s time. But there is no such royal road to a knowledge of medieval history.

On George G. Coulton’s elite moralizing, see notes [4] and [5] in my post on si non caste, tamen caute. Coulton apparently was a scholar in the moral tradition of William W. Sanger, a late-nineteenth-century civic leader and pioneering social scientist.

[4] For the relevant medieval Latin text, Wetherbee’s translation, and critical analysis, see note [3] and associated text in my post on the Cosmographia.

[5] For the relevant medieval Latin text, Wetherbee’s translation, and critical analysis, see note [11] and associated text in my post on the Architrenius.

[6] For the missing medieval Latin couplet, with English translation and analysis, see note [4] in my post on horse vs. mule in the Speculum stultorum.

[7] For the relevant Old French text and a review of published English translations, see note [4] in my post on gender justice in Cligès.

[images] (1) A man (the traitor Ganelon) being drawn and quartered; depicted dorsally. Illumination from folio 216r of an instance of Jacob van Maerlant’s Spieghel Historiael. Made in West Flanders, c. 1325-1335. Preserved as The Hague, Koninklijke Bibliotheek {National Library of the Netherlands}, MS KA 20. (2) Hugh the Younger Despenser castrated and disemboweled in the course of his execution. Illumination made by Loyset Liédet in the 1470s. On folio 11r of the Froissart Manuscript, Paris, Bibliotheque Nationale MS Fr. 2643, via Wikimedia Commons. On Hugh’s remains, Lewis (2008).

7 thoughts on “torturing the penis: enlightened philology’s failure to represent”