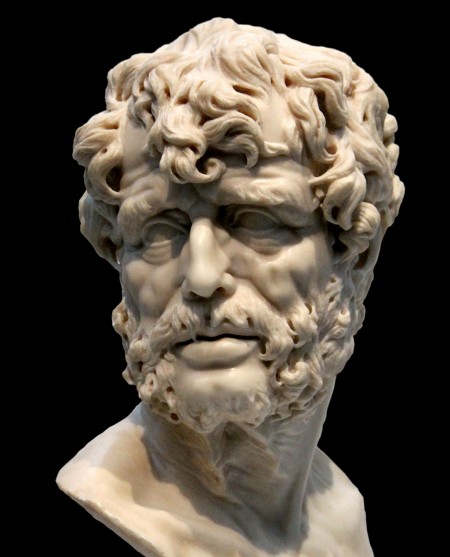 Seneca the Elder’s Controversies {Controversiae} documents ancient Roman orators developing attention-grabbing stories like those of the Greek and Roman novels. One of the most important of these stories tells of a strong, independent woman rescuing a man from incarceration. Since Rome’s founding men married Sabine wives, Rome and subsequent civilizations have suffered under the disproportionate criminalization and incarceration of men characteristic of gynocentric society. Andreas Capellanus’s late-twelfth-century About Love {De amore} incorporated only the sophistic form of Seneca’s Controversiae. The mid-thirteenth-century sermon story-collection Deeds of the Romans {Gesta Romanorum} directly incorporated Seneca’s story of the woman freeing a man from incarceration. Gesta Romanorum depicted the woman’s keen intelligence, celebrated her compassion for the man, and interpreted her as representing Christ.

Seneca’s Controversiae presents stories for orators simply as factual narratives. The story about the woman rescuing the man from incarceration lacks any moral consciousness of the social devaluation of men’s lives:

A man captured by pirates wrote to his father about a ransom. He was not ransomed. The daughter of the pirate chief forced him to swear to marry her if he were let go. He swore. She left her father and followed the young man. He returned to his father, and married the girl. An orphan appeared on the scene; the father ordered his son to divorce the daughter of the pirate chief and marry the orphan. He refused. His father disinherited him.

The story begins with reference to a backstory of violence against men. Being captured rather than killed commonly characterizes female privilege. Yet as a captive, the man apparently had the socially disposable status of men in general (his father didn’t ransom him). The man traded freedom from imprisonment for the prison of marriage. In Chaucer’s The Franklin’s Tale, a woman’s oath has great social importance. In this case, the father without concern ordered his son to break a sworn oath and marry a different woman. When the son refused to break his oath to the woman who rescued him from impersonal incarceration, his father disinherited him.

Seneca records orators speaking on behalf of different parties in the story. One orator cruelly ridiculed the woman as a daughter of a pirate:

She should be banned from dry land.

He also ironically suggested that she hated her father, a bad omen for a wife’s relationship with her husband and with her father-in-law:

Here is a promising wife, a promising daughter-in-law — she can love even a prisoner, hate even her father.

Defending the daughter, another orator speculated that her mother was a victim of the pirate father. The orator praised her mother and declared the daughter was nothing like her father:

She is called the daughter of a pirate chief, but her mother, I think, was some captive. Certainly her character set her apart from her father. She showed compassion, she made intercession, she wept, and she was moved by everyone’s perils. There was nothing of the pirate detectable in her.

Pirates weren’t regarded as being noble. The orator, however, pointed out that if you look far enough back in the family of any noble person, the family was once not recognized to be noble. Moreover, if a man shrewdly marries a rich woman (the orphan was assumed to be rich from money she inherited from her father), she may leave him and take her wealth away from him (divorce courts catered to women even in ancient Rome). This is all typical sophistic word play. The orators showed no deep compassion for imprisoned men.

A certain lady had a lover who stayed away on an expedition overseas. She had no expectation of his early return — in fact everyone despaired of his return — and she sought another lover. Now a confidential aide of her first lover was quite indignant at the women’s changed loyalty, and opposed her new love. The woman was reluctant to accede to his advice, and put forward the following defense of her conduct. She said that if a woman widowed by the death of a lover can seek a fresh lover after a period of two years, this concession ought to be granted all the more to a woman bereft of a living lover, a woman who had not been given the pleasure of the arrival of a messenger or a letter sent by her lover since he departed — especially as there was no shortage of messengers.

The lover who fails to return timely from a long voyage is a conventional topos of romance. The case moves from serious issues of mourning norms to the common complaint about a distant friend, “Why haven’t you written me?” The trailing note about “no shortage of messengers” is a wry, rhetorical flourish. Another case:

A certain young man adorned with no honesty of character and a mature knight pleasantly endowed with every moral attribute sought the love of the same woman. The young man’s counter-argument was that he should be preferred to the mature man, because if he obtained the love he sought he could thereby gain worthy manners, and the woman would win outstanding praise if through her his wickedness was transformed into sterling worth.

This case contrasts personal, passionate love with more abstract ideas of virtuous love and love as seeking the other’s good. Women’s typical passionate preference for a young man over a “mature” man and a jerk boy over a nice guy adds emotional color to the case. While Seneca’s cases invoke agonistic oratory among men, Andreas Capellanus connected the cases directly to gynocentrism by having one woman-judge render the decision for each case. In this case, the woman judge concluded with an epigram alluding to sexual intercourse and raising children:

the mere casting of seed does not always harvest breed

That sort of epigram has been updated into wisdom for ambitious career woman today: have sex with the bad boys, but marry the dull beta man who will support you by vacuuming and dusting.

The mid-thirteenth-century Latin sermon story-collection Gesta Romanorum re-interpreted Seneca’s case in accordance with the medieval idealization of women. As in the story in Seneca’s Controversiae, pirates captured a man. The man’s father refused to ransom his son. But the ideal woman intervened:

Now, the pirate chief who detained him in chains had a daughter of great beauty and virtue. She was at this time in her twentieth year, and frequently visited the young man with the hope of alleviating his grief.

The captured man refused consolation from the woman. He instead asked her to set him free. She promised to do so if he would marry her. He agreed. She then freed him, and they both fled back to the man’s country.

Back in his home country, the man introduced his woman-savior, his betrothed, to his father. The father told his son that if he went through with the marriage, he would lose his inheritance. That threat echoes the outcome of Seneca’s case. The father also warned that the woman had deceived her father, and that she sought marriage only to gratify her lust. Those are claims brought up in the discussion of the case in Seneca. Hearing those claims, the woman argued against them with impeccable medieval scholastic reasoning:

To your first objection, that I deceived my own parent, I reply that it is not true. He deceives who takes away or diminishes a certain good. But my father is so rich that he doesn’t need any addition. When, therefore, I had maturely weighed this matter, I procured the young man’s freedom. And if my father had received a ransom from him he would have been only a little richer, while you would have been utterly impoverished. Now, in acting thus, I have served you, who refused the ransom, and have not injured my parent. As for your last objection that an unworthy passion urged me to do this, I assert that is false. Feelings of such nature arise either from great personal beauty, or from wealth or honors; or finally, from robust appearance. None of these qualities your son possessed. For imprisonment had destroyed his beauty, and he wasn’t sufficiently wealthy even to liberate himself. Moreover, much anxiety had worn away his strength and left him emaciated and sickly. Therefore compassion was what persuaded me to free him.

The father yielded to the woman’s well-reasoned argument. She and his son had a fancy wedding and lived the rest of their lives peacefully together.

The moralization of the story in Gesta Romanorum identifies the woman with Christ. It explains:

The daughter who visited him in prison is the divinity united to the soul, who sympathized with the human species. After His passion, He descended into Hell and freed us from the chains of the devil. … Christ, moved with compassion, came down from Heaven to visit us, and took upon Himself our form, and required no more for our redemption than to be united in the closest bonds with humanity.

The moral with the woman as Christ sympathizing with the man has continuing relevance today. Men are now vastly disproportionately incarcerated. In a major effort to exacerbate further that fundamental social injustice, colleges and universities are now spearheading efforts to criminalize men for ordinary sexual behavior. Women today should act in the person of Christ as the medieval woman did to liberate the man from incarceration.

[1] Seneca the Elder, Controversiae 1.6, “The Pirate Chief’s Daughter {Archipiratae Filia},” from Latin text and English translation from Winterbottom (1974). I’ve changed some verbs in the historical present tense to the past tense for consistency in modern English. Latin text is available online.

Seneca the Elder (Lucius Annaeus Seneca) was a Spaniard from Cordoba. He lived from about 55 BGC to 40 GC. His son, Seneca the Younger, was a well-known philosopher and playwright. Laird (2008), pp. 212-3, notes the close thematic connections between the Controversiae and ancient romance.

[4] Gesta Romanorum, Moralized Story {Exemplum} 5 (“About pursuing with faithfulness {De sectanda fidelitate}”), Latin text from Oesterley (1872), Latin translation from Swan & Hooper (1876) p. 8, with my changes to follow the Latin more closely and to be more easily readable. The subsequent two quotes are from id, pp. 9-11. A new English translation is forthcoming in Stace (2016). In the Anglo-Latin Gesta Romanorum of Bright (2019), this is Exemplum 87 (“Pirate’s Daughter”). See also Additional Exempla, Exemplum 10 (“Pirate’s Daughter (Variant Version)”) in id.

An English Franciscan probably compiled Gesta Romanorum shortly before 1274. Harris (1995), p. 169. Some scholars regard it as from the early fourteenth century. Gesta Romanorum was a highly popular and influential medieval work.

Other than his Epistles, Seneca the Younger’s works attracted substantial attention in medieval Europe only from the early-twelfth century. In the Middle Ages, the Controversiae were known as a work of Seneca the Younger. Mayer (2015) pp. 277-8.

[image] Bust of Seneca the Younger. Anonymous, 17th century. Item Cat. E144 in the Museo del Prado in Madrid. Thanks to Jean-Pol Grandmont and Wikimedia Commons.

Friedlaender, Ludwig, trans. by Alfred Bradly Gough. 1909. “Appendix LV: Borrowing from the Controversiae of the Elder Seneca in the Gesta Romanorum.” Roman life and manners under the early empire. London: Routledge.