In the generic conventions of Roman love elegy and early Arabic love poetry, an infatuated, weepy man implores a beautiful, shrewd woman for sex.  Those poetic conventions build upon universal human bio-social nature.[1]  Men are typically forced to work much harder than women do to get sex.  Those poetic conventions also set up the man for failure.  According to Ovid, Heartiste, and other leaders in the experimental science of sexual persuasion, being a sexually desperate, imploring man doesn’t work well to get sex.  That doesn’t matter.  Ordinary men’s sexual needs are typically trivialized, disparaged, sabotaged, criminalized, or ignored in elite discourses.  What about the poetry? 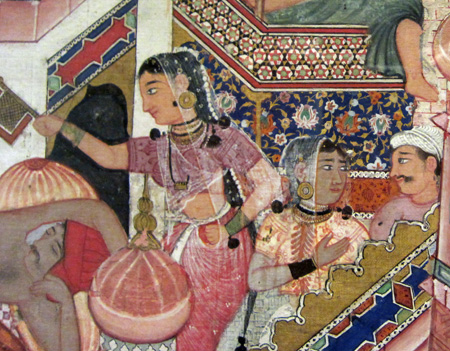 In its poetic treatment of aging, Roman love elegy jars an ideal of eternal beauty with a crude depiction of old women.  Ancient Greek and Roman literature represent women’s aging harshly and bluntly:

You dye your hair, but you will never dye your old age, or smooth out the wrinkles of your cheeks.  Then don’t plaster all your face with white lead, so that you have not a face, but a mask; for it serves no purpose.  Why are you out of your wits?  Rouge and paste will never turn Hecuba into Helen. [2]

Invocations of the effects of age have served as tools for sexual persuasion within the general Epicurean program of carpe diem.  A Latin text attributed to the fourth century declared:

O maid, while youth is with the rose and thee,
Pluck thou the rose: life is as swift for thee. [3]

In Roman love elegy, the man imagines eternal bliss with his beloved woman.  The reality of aging emerges within the context of his resentment of the woman locking her door against his sexual desire in favor of men with less eternal interests:

Good-bye, old threshold; farewell, familiar door.
No more shall I bang my fists on your unresponsive timbers.
And good-bye, to you, too, lady.  Your future awaits,
the oppression of age, wrinkles, spider-veins, and saggings,
and you’ll hunt for new gray hairs, and tear them out,
but more will come, and the scowl lines will deepen into your forehead
from anger, chagrin, and the scorn you have to endure
when what you have done to me gets done in turn to you
by your gigolos, lounge lizards, and such riffraff.
This isn’t so much my curse as a statement of simple fact,
my prophecy of what lies in wait for your beauty. [4]

That’s not an imaginative description of aging.  The theme “what you have done to me gets done in turn to you” is a vulgar moral principle prevalent across human societies.  Roman love elegy’s invocation of a woman’s aging is no more poetically interesting than resentful meanness.

Early Arabic love poetry caps Roman love elegy’s treatment of aging.  Arabic poetry from as early as 500 show Hellenistic influence through men’s claims of being chained and enslaved in unreciprocated love, suffering and frequently crying in that love, and ultimately dying from that love.[5]  Hellenistic influence within the theme of aging appears in late seventh-century Arabic love poetry describing chaste love between Jamīl and Buthaynah.  Jamīl and Buthaynah’s love began when they were very young, endured Buthaynah’s marriage to another, and lasted through to Jamīl’s death. A poem that a scholar of early Arabic poetry calls “one of the finest love poems in Arabic” imagines a conversation about aging between Buthaynah and Jamīl:

Buthaynah said when she saw my hair tinted red:
“You have grown old, Jamīl!  Your youth is spent!”
I said, “Buthaynah, don’t say that!”
Have you forgotten our days in Liwā, and in Dhawī ‘l-Ajfur?
Did you not see me more, when we were in Dhū Jawhar?
When we were neighbors?  Do you not remember?
And I young and soft-skinned, trailing my train behind me,
My hair black as the raven’s wing, perfumed with musk and amber,
That was changed by the vicissitudes of time, as you well know!
But you! Like the marzubān’s pearl, still a young girl,
We were neighbors once, sharing the same playground.
How did I grow old and you did not?” [6]

Jamīl as an old man dying his hair isn’t an unrealistic image.  Elite men in thirteenth-century Damascus dyed their hair and beards to obscure aging.[7]  Yet the concluding line, “How did I grow old and you did not?” signals an imaginary world.  The poem’s most plausible setting is Buthaynah and Jamīl’s young adulthood.  Jamīl composes forward in time a conversation-poem reversing Roman love elegy’s spiteful soliloquies on the aging of the poet’s unattained beloved.  The theme of sexual attractiveness across the lifespan is traced through specific shared memories of places and statuses back to childhood playmates.  Aging in men tends to bring greater social status and material resources, making them more sexually attractive to women.  Aging in women tends to make women less physically beautiful, making them less sexually attractive to men.  But what man would be indecorous and impudent enough to say that? Buthaynah and Jamīl’s poetic conversation works to redeem Roman love elegy in exquisite poetic truth.

[1] Practicing sexual persuasion according to these poetic conventions was far from universal.  Courtly love was for the socially and economically privileged. Grunebaum (1953) p. 312.  Men of that class also had relatively easy access to sex.

[2] Epigram attributed to Lucian, from the Greek Anthology. Trans. Paton (1918) p. 267.  Helen was a beauty admired far and wide.  Paris, a Trojan prince, abducted Helen from Sparta and thus provoked the terrible suffering of the Trojan War.  Paris was the son of Hecuba, who had 19 children with her husband, King Priam of Troy.  Hecuba probably wished that Paris had settled for a more homely Trojan woman.  On cosmetic face masks using white lead, see Forbes (1964) pp. 39-40.  White lead was a popular (and dangerous) cosmetic ingredient throughout antiquity.  Green (1979) p. 385.  Cokayne (2003) Ch. 7 and James (2003) pp. 167-83 discuss woman’s aging within Roman love elegy and within elite Roman society.  Both of those works, like much of classics scholarship on gender, are gynocentric tending toward misandristic.

[3] From “On Newblown Roses,” a poem questionably attributed to the fourth-century Latin poet Ausonius, trans.  Waddell (1948) pp. 26-29 (with Latin source).  Robert Herrick’s seventeenth century poem, “To the Virgins, to Make Much of Time” echoes this text.  The metaphor of a flower for human aging is common.  For example, 1 Peter 1:24: “All flesh is like grass and all of its glory like the flower of grass.  The grass withers, and the flower falls, but the word of the Lord endures forever.”  Cf. Isaiah 40:8.  The blooming and fading rose has been a common metaphor for women’s beauty through the medieval period to the present.

[6] Arabic poem attributed to Jamil ibn Ma’mar (d. 701), trans. Jayyusi (1983) p. 426.  Id. also provides the praise of the poem.  Henna was used in the ancient world to dye hair (see note below), but usually to black rather than red.  The reference to red hair may have had meaning like the term blue hair today.  Marzubān is an Arabic word borrowed from Persian,  It means a governor of a frontier district.  The reference to “trailing my train behind me” echoes the behavior of Greek revelers.  Grunebaum (1953) p. 315.  Plutarch, in Alcibiades 16.1 observes, “all this statecraft and eloquence and lofty purpose and cleverness was attended with great luxuriousness of life, with wanton drunkenness and lewdness, with effeminacy in dress,—he would trail long purple robes through the market place,—and with prodigal expenditures.”

[7] Ibn Abi Usaybi’ah noted of the physician Sharaf al-Dīn ibn al-Rahbī (d. 1267 in Damascus), “He used to dye his hair with henna, upon which I remarked, “If you left your beard white, it would be more becoming.”  Al-Rahbī, as intellectuals in the ancient Islamic world commonly did, responded with a poem that ibn Abi Usaybi’ah quoted. HP p. 848.  Ibn al-Suwaidi (b. 1203 in Damascus) wrote a poem “Concerning his worries, i.e., having to dye his hair black.”  HP p. 942.