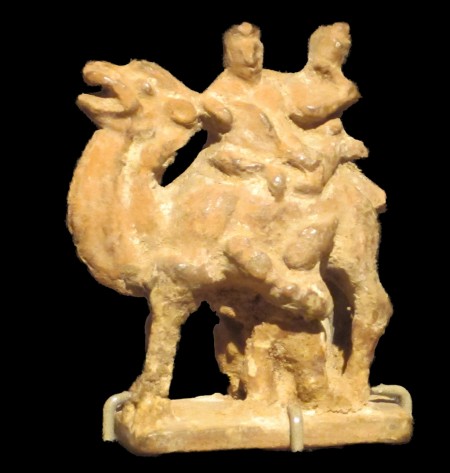 An earthenware miniature from early eighth-century China represents a camel and three musicians. On the camel one musician is playing a flute and another, a lute.  Standing beside the camel a third musician is playing perhaps an ancient multiple free-reed instrument called a sheng.[1]  A camel and three musicians could have been part of a wealthy entourage traveling across ancient Eursia.  Alternatively, a camel and three musicians might have been an independent trading party, trading entertainment for goods with other traveling parties along the “Silk Road“.  The earthenware miniature itself makes best sense as a gift/trade good from up-market musicians exchanging memorable entertainment for physical goods from wealthy Eurasian travelers.[2] The earthenware miniature indicates that ancient Eurasian travel routes supported an entertainment business structure similar to that of independent magic lanterne operators in early modern Europe.

The music business in Eurasia was not just a specialized, elite urban profession.  In a fragmentary Judeo-Persian business letter from west-central China late in the eighth century, a Jewish merchant mainly recounted difficulties in his sheep trades.  Yet the merchant also referred to a harp, a girl, and a eunuch:

Whatever these lines mean, the context is clearly commercial, long-distance trade in central Eurasia.  Persons (“courtesans”), mainly women but also some men, provided men with music and sex in exchange for goods and personal power in thriving central Eurasian cities such as Baghdad and Kucha.  In ninth-century Baghdad, a knowledgeable writer stated that accomplished female courtesans could sing upwards of four thousands songs two to four verses long.  An Abyssinian (Ethiopian) female courtesan reportedly was traded for the enormous sum of 120,000 dinars.[4]  Yet the courtesan business also existed as a much smaller enterprise.  A Jewish merchant traveling across central Eurasia and struggling with sheep trades had a small business with a harp, a girl, and a eunuch.

[1] The earthenware miniature (shown above) is on display through July 7, 2013, in the Sackler Gallery’s exhibit, One Man’s Search for Ancient China: The Paul Singer Collection.  The miniature is labeled “camel with musicians, Tang dynasty, first half of the 8th century, earthenware with white slip, RLS1997.48.106.” It measures approximately 3.2 cm wide x 3.8 cm tall.  If you click on the image, you will see a larger image with the instruments labeled.

[2] Eurasian nomadic peoples are associated with solo performers (bards), known for engaging in bardic duels called aitys.  Three musicians traveling on one camel and playing together is a rather different music business structure than a bard competing with other bards.  Large, high-quality, well-preserved Tang-era sculptures show non-Chinese musicians atop camels.  These sculptures are more likely to be grave goods of wealthy Eurasian merchants.  The earthenware miniature of a camel and musicians would have been relatively cheap to produce.  It’s also quite worn.  That’s unlike grave objects buried new and uncovered as buried.

[3] Trans. Utas (1968) p. 130 (a “word for word” translation), adapted slightly here. The words “from” and “black” in the translation are marked with “?”, indicating tentative translation.  The word “quick” similarly is tentative relative to “quickly.”  The translation “harp” has supporting evidence.  Id also provides an image of the manuscript, the Judeo-Persian text in its Hebrew letters, a transcription, and commentary.  The translation is considerably different from the earlier translation of Margoliouth (1903).  See McClanahan (2011), Part II, for the cultural context of the Judeo-Persian letter.

[4] Al-Jahiz, Risalat al-qiyan, trans. Beeston (1980) (“Epistle on Singing Girls”) paras. 53, 55, p. 35.  Al-Jahiz is a highly literary writer often neither transparent nor sincere.  The claims above are plausible in the context of the Abbasid court in ninth-century Baghdad.  Under Islamic law, a man was allowed to have sex with his wives as well as his personally owned servants (“slaves”).  Al-Jahiz describes a transaction by which a person who owned a highly regard musician could legally pimp her or him:

It is perfectly legitimate for a girl to be sold to a rich man, who has his will on her (remaining at the same time morally irreproachable), and then returns her to her {original} owner at a less price than that for which the latter first sold her, so that the latter gets the profit

Margoliouth, D. S. 1903.  “An Early Judaeo-Persian Document from Khotan, in the Stein Collection, with Other Early Persian Documents.”  Journal of the Royal Asiatic Society of Great Britain and Ireland.  Oct., pp. 735-760.