Thirteenth-century Mongol beliefs and rituals were cosmopolitan.  Mongol rulers burned sheep shoulder-bones and read the resulting cracks in the bones for guidance in taking actions.[1]  That’s similar to the ancient Chinese practice of reading oracle bones.  The Mongols ritually purified persons and objects by having them pass between two fires.  Such ritual action can be understood as a spiritualization of the process of refining silver and gold.  Spiritual refinement with fire is also described in Hebrew scripture.[2]  Before drinking, the Mongols poured out portions for cosmic entities:

The Mongol libation ritual could also take a simpler form:

When the master of the house is holding the cup in his hand and is due to drink, first of all prior to drinking he pours on the ground its own share. [3]

Such Mongol practices have been described as shamanistic rituals.  Ancient Greeks and many other ancient peoples made similar libations.  Mongols were eclectic, cosmopolitan users of rituals and beliefs common across Eurasian history. 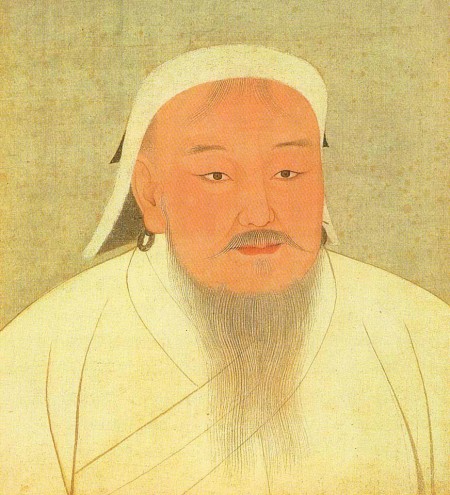 Mongol rulers’ demands that rulers of well-established sedentary civilizations submit to them were not crude, violent ultimatums from a savage people.  The thirteenth-century Mongol ruler Möngke Khan described the Mongols’ cosmological beliefs thus:

This is the order of the everlasting God.  In Heaven there is only one eternal God; on earth there is only one lord, Genghis Khan.  This is the word of the son of God {Genghis Khan} which is addressed to you.  … if you are willing to obey us, you should send your envoys to us: in that way we shall be sure whether you wish to be at peace with us or at war. [5]

From the Mongol perspective, the only alternatives for other peoples were to submit to the Mongol ruler or to be at war with the Mongols.[6]  The Mongols’ cosmopolitan culture co-existed with totalitarian political practice.

Genghis Khan fought expansively to actualize his ideology of supremacy.  He apparently believed intensely in his favor with god, but worked hard for himself.  That seems to be the disparate pattern of beliefs that imply war.

The purification by fire is done this way: they build two fires and they place two spears near the fires and a line between the tips of the spears and they tie onto the line strips of buckram beneath which and between the two fires the people, animals and tents pass.

Jackson, Peter and David Morgan, trans. and ed. 2009.  Willem van Ruysbroeck. The mission of Friar William of Rubruck: his journey to the court of the Great Khan Möngke, 1253-1255. Indianapolis, IN: Hackett Pub. Co.