In his Letter to the peripatetics of France, early twelfth-century philosopher and physician Petrus Alfonsi described love and sharing as being at the center of scholarly practice.  To his fellow Christian philosophers, Alfonsi presented this ideal of scholarly collegiality:

Since it is proper that all those who have drunk of any philosophical nectar love each other, and that anyone who might have anything rare, precious, and useful which is unknown to others should impart it generously to others, so that in this way everyone’s knowledge may both grow and be extended in time:  We then, wishing to observe this law, have been zealous to present something sweet and delicious to you who test through experience. [1]

Born a Jew in Muslim Spain, Petrus Alfonsi knew Hebrew, the Bible, and the Talmud.  His name given at birth was Moshe.  He learned Arabic and studied the leading science and literature of the Islamic world.  In 1106 in Huesca, the seat of the Spanish Christian ruler Alfonso I of Aragon, Moshe converted to Christianity.  He then adopted the name Petrus Alfonsi.  By 1116, Alfonsi was living in England.  There he taught astrology and perhaps offered medical services to King Henry I of England.  Alfonsi subsequently moved to northern France, where he wrote his Letter to the peripatetics of France.[2]  In that letter, Alfonsi asserted the importance of astrology, demonstrated his leading astrological knowledge, and sought learned students.[3] 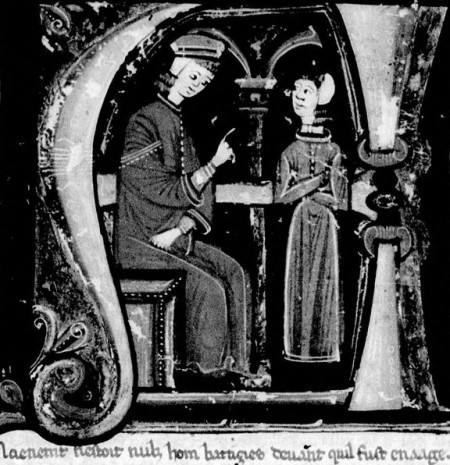 Alfonsi’s learning in retrospect appears to have been misguided and to have caused harm.  In the pre-modern world, astrology and astronomy were nearly synonymous, and astrology was also closely associated with medicine.  Astrologers claimed to be able to determine, by the position of the moon and sun, the course of diseases and the proper times for administering medicine.  Alfonsi’s medical service to King Henry I most likely was as an astrologer-physician.  Astrology today is not scientifically credible.  No good evidence exists that astrology has any real relationship to disease and medicine.

Alfonsi also wrote Dialogues against the Jews.  That work is organized as dialogues between Alfonsi’s former self (Moshe) and his current self (Petrus).  The dialogues attempt to discredit reasons for Jewish beliefs and for Islamic beliefs.  The dialogues put forward reasoned justification for Christian beliefs.  Alfonsi’s personal knowledge of Jewish beliefs and practices and his advanced philosophical and literary learning from the Islamic world gave Dialogues against the Jews considerable scholarly authority in medieval Latin Europe.  Alfonsi’s work contributed significantly to a more vicious anti-Semitism and intolerance for Jews in medieval Europe.  Alfonsi was intellectually cosmopolitan and gracious to those he regarded as holding false beliefs.  He surely valued dialogue and did not seek to promote the persecution of Jews.  His sharing of his knowledge, however, had that deplorable effect.

[1] Epistola ad peripatetics (Letter to the peripatetics of France), from Latin trans. Tolan (1993) pp. 172-3.  Id. provides the full Latin text of the letter, an English translation, and a description of the sole surviving manuscript.  I’ve modified slightly the last sentence quoted above for clearer sense and to place the final Latin clause as the final English clause.  For an alternate translation of this text consistent with the above, see Hermes & Quarrie (1977) p. 67.  Alfonsi also stated:

Since I have discovered that almost all Latins are devoid of knowledge of this art of astronomy, though I have practiced it for a long time and I have learned a small part of it, I have decided, if it pleases you, to share it with you and to present it — with diligence and kindness — as something rare, sweet, and delicious.

[2] Tolan (1993) pp. 9-11.  Moshe is the Hebrew name corresponding to Moses.  The name “Petrus Alfonsi” came from Moshe’s veneration for the Jewish-Christian Apostle Peter and his desire to honor Alfonso I.  Alfonso I became Moshe’s godfather at his adult Christian baptism.  A rubric in one thirteenth-century manuscript describes Petrus Alfonsi as “medicus” to King Henry I.  Other relevant sources say nothing about such service.  Id. n. 17, pp. 213-4.  Alfonsi providing astrological-medical advice to King Henry I could help to explain his low profile as a physician to the King.

[3] I use the term “astrology” rather than “astronomy” above to represent better the modern understanding of the relevant type of knowledge that Alfonsi offered.