The earliest illustrated manuscript of yoga poses shows a person doing a headstand.  The manuscript, which is from the beginning of the seventeenth century, explains that this pose creates “a kind of fire that burns up all impurities.”[1]  Feeding that fire is blood flowing with gravity to the head.  All the rest of the poses involve seated positions.  Seated positions were associated with meditation.  Don’t just walk through the exhibit.  Sit and meditate.  Do a headstand if necessary.

Some of the most poignant paintings show two yoga practitioners seated in meditation, facing each other.  That’s not a teacher demonstrating exercises in front of a yoga class.  It’s not a personal trainer telling you what to do.  It’s also different from the television show Lilias, Yoga and You, which makes a personal connection only with an alliteration of y’s.  Practicing yoga together is like couples dancing with a cosmic orientation.  Bring another with you through this exhibit. 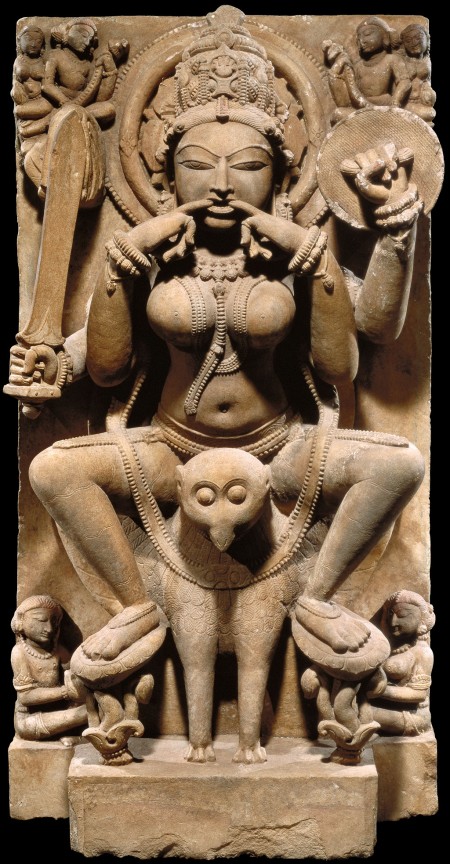 A short walk across the hall of the Sackler Gallery connects eleventh-century yogini sculptures to nineteenth and twentieth-century European-American representations of yoga.  What does a sculpture of a busty yogini armed with a sword and riding an owl have to do with Thomas Edison’s early film Hindoo Fakir?  Stripping away contemporary cultural prejudices, the two representations are similar in important ways.  Both are sensational imaginings of others carrying claims of spiritual power.  Embodied human beings, male and female, laugh and leer.  Exhale the tension you feel from your toes to your ears.

The Hindoo Fakir and the yogini both allude to physical exercises.  The fakir vigorously manipulates his female counterpart and marvels at her capabilities.  The yogini has beautiful physical symmetry except for special differences.  One difference is the weapons the yogini holds in opposing hands.  Another, more subtle difference is the sexual characteristics of the two figures at the base of the yogini’s spread legs.[2]  Play coed Twister.

An ancient idea in yoga is the union of the microcosm of individuality with the macrocosm of universality.  The exhibit includes an early nineteenth-century Indian painting of Vishnu as Vishvarupa.  Inscribed within the figure of Vishnu are animals, people, buildings, and landscapes representing all of the cosmos.  The exhibit itself has a wide range of objects presented from the museum-standard cosmic perspective.  You must bring the objects of this exhibit within yourself.

Yoga: Art of Transformation is at the Sackler Gallery through January 26, 2014.

[1] Folio from the Bahr al-Hayat (Ocean of Life), from Mughal court, India, Uttar Pradesh, Allahabad, dated 1600–1604.  The Persian text around the image is translated in the exhibit’s item description.  That’s the source for the quote above.

Its sculptor beautifully exploited the softness and warm golden color of sandstone to convey the organic quality of plump flesh. This organic quality has its roots in a sculptural tradition that began with clay. The plasticity of terracotta imbues its realization from the doughy stems of the lotus flowers at bottom to the thick, circular halo at top. In contrast, passages of intricate carving, like her pearl-studded necklace and girdle, not only provide texture and visual interest, but also curve around her body to emphasize its rounded volumes. Indeed, the artist’s ability to balance—without fussiness—the smooth limbs and the very precisely realized cuticles of her fingernails, her individually carved little teeth, and the crisply delineated feathers of the owl is masterful. That balance of adorned and unadorned achieves dynamism from a rigorous yet rhythmic geometry. All this achieves drama from the sculptor’s sophisticated manipulation of volumes and shadows.

From the exhibit’s Curator Q&A.