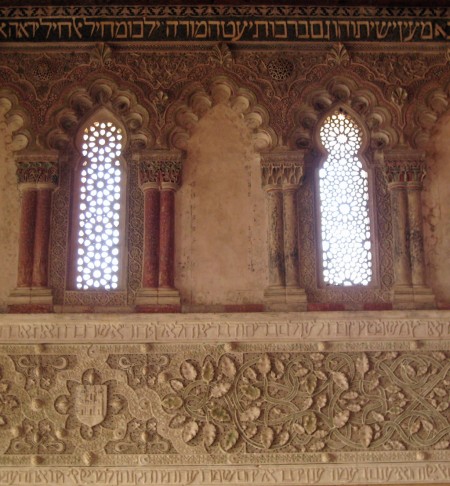 Early thirteenth-century Hebrew author Judah al-Harizi introduces his book Tahkemoni with praise for wisdom, God, and intellect.  That praise concludes with a prayer to God for protection:

Protect us from the arrogant, we who revere You, shine Your countenance upon us, draw us near You; number us among the souls who truly love and fear You. [1]

Al-Harizi then describes himself to be divinely ordained as his nation’s poet.  That commission comes from “my Intellect,” which al-Harizi also calls “the Intellect” and “the Divine Mind.” The Intellect purifies al-Harizi’s lips with a burning coal, just as did an angel for the great prophet Isaiah.  Al-Harizi figures his words as gold for princes’ and courtiers’ necklaces and bracelets:

The Lord has gifted me with a skilled tongue and lifted me above my kin that I might place within the Intellect’s palm the gold of my thought, subtly wrought, long sought-after and too precious to be bought, that he might make thereof bands for princes’ necks and dear companions’ hands.

Al-Harizi’s fear of the arrogant and fear of God didn’t stop him from giving himself high praise.

Al-Harizi’s Tahkemoni is a distinguished work.  It’s an original literary composition in Hebrew, the sacred language of Jewish scripture.  Hebrew was not commonly used in non-religious Jewish writing from at least 2000 years ago.  With Tahkemoni, al-Harizi sought to demonstrate the suppleness and power of the Holy Tongue Hebrew in non-religious literary writing.  Tahkemoni encompassed all of life:

I tell of teetotallers and drinkers, of warriors and thinkers, spin tales of journeys, of kings and poets’ tourneys, prayers and supplication, praise and protestation, the rebuke of the wise and good fortune’s demise, the role of Love’s gazelles and the cool of desert wells, stint’s harsh breeze and beggars’ pleas, wind and water, sword and slaughter, harts’ hunt and heart’s want, travellers’ treks and slippery decks and vessels’ wrecks, slandering, pandering, and Youth’s meandering, Nazirites’ vows and drunken carouse, paramours, ills and cures, blockheads and boors, guile’s school and the gulled fool, gibe and jeer and snub and sneer, song enchanted, wine discanted, witty invention, brazen contention — all this that this book might be Song’s manse and garden, wherein every seeker might sate his quest, every petitioner gain his behest: herein shall the weary rest.

After finishing that long sentence, the weary reader rests and marvels.  Al-Harizi recommends his book for the God-fearing and the God-forsaking, and for the dimwit and the wise.  He describes his book as a feast.  It will also beautify lips:

well shall this feast serve our people from west to east, for too often is their Hebrew mangled, their phrases tangled, their clauses jarred and jangled.  Let the limp, the halt, the twisted, the unsightly read this work and speak rightly.

Al-Harizi was completely serious about his purpose.  He sought to instruct in Hebrew literary entertainment.

from the Euphrates to the Nile I sought a patron’s smile, a champion of Generosity’s camp to lend my work his stamp.  Long I looked that I might seize and bind him: I sought him, but I did not find him.  I searched until appalled: no one answered when I called.

Al-Harizi finds a patron in his introduction to Tahkemoni.  He pays the patron with lavish praise:

I found him whom my soul loves and God approves, for He has set him Prince above his generation, a lion whom we roar in acclimation, Probity’s girdle and Kindness’ glove, Wisdom’s tiara and the sceptre of love, a rising sun, a Joseph for awe, a David guarding godly law, a leaping stag, discernment’s crag, and eagle soaring proud and lone, a Solomon seated on Wisdom’s throne.  He strums on sapience’s lute — rhetors and sages fall mute; before his lineage all nobles are ashamed, and when he gives, all givers are defamed. … He is the great prince of blazing merit, Israel’s wall and turret, the great Maecenas, that shining soul, Rabbi Samuel son of Alberkol

Al-Harizi finds another patron in the first gate (chapter) of Tahkemoni.  He praises that patron lavishly:

Two witnesses attest to his renown: Solomon his seal and David his crown.  With them for chariots and cars, he rules the stars.  Before him angels peal.  Lo, the age’s prince — kneel, kneel, O Israelites: thus shall be done to the man in which the king delights!  He is praise’s walls and ground, his virtue knows no bound, his speech no flaw; his heart is an endless ocean of God’s law.  His mouth is Wisdom’s gushing fountain; his mighty arm, Salvation’s mountain. … He is our master of bright renown, our God-fearing crown of piety, agate and coronal of our society, seed of kings and our prince and lord, our outstretched arm, our bared and gleaming sword, our pillar of fire, dispelling darkness for us, the Ark of the Covenant journeying before us, our holy throne, our song and our refrain, who turns the hills and twisted ways to a level plain, our rabbi, teacher, lord, and king, Wisdom’s signet-ring: Josiah

In various manuscripts, Tahkemoni was also dedicated to at least three other notables.  Two manuscripts exclude the above dedication to Josiah.  According to a leading scholar of Tahkemoni, those manuscripts were “doubtless copied from a manuscript meant for a different patron.” [2]

Al-Harizi’s self-interested puffing and flattery seem to me to be part of his larger program of entertainment.  Elaborately praising different patrons in the introduction and in chapter one probably isn’t mistaken double-dressing.  Out-doing the praise in the introduction, the praise in chapter one deploys direct figures of idolatry: the patron is “our pillar of fire” and the “Ark of the Covenant.”[3]  That’s too outrageous not to be meant as entertainment.  Both al-Harizi’s praise of himself and his expansive valuation of his book are similarly outrageous.  Elaborate praise of patrons is a feature of the Arabic literary tradition.  Al-Harizi knew that tradition well.  He humorously capped the Arabic tradition with all the serious resources of the Hebrew language.

Amid bountiful opportunities and rights, what writing today is as daring, path-breaking, and entertaining as al-Harizi’s Tahkemoni?

[3] God manifested himself as a pillar of fire and protected the Hebrews as they fled from captivity in Egypt.  Exodus 13-21-22, 14:24.  The Ark of the Covenant held the Torah and physically represented the contract between God and the Hebrews.