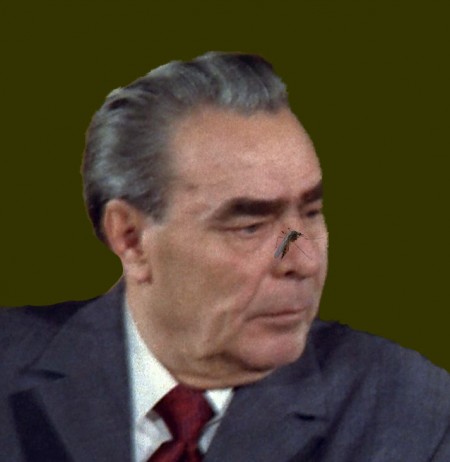 Once upon a time in Basra there was a cadi called ʻAbd Allāh ibn Sawwār.  As an outstanding bureaucrat, he was grave, imperturbable, and immobile.  He spoke the proper words at the proper time and wasted no movement other than the necessary movements of his lips.  But one day a disturbance interrupted his work routine:

with his assessors and the public seated around him and in two rows in front of him, a fly landed on his nose and lingered there a long while.  Then it moved towards the inside corner of his eye.  He wanted to endure when it got into the corner of his eye and bit it with its piercing proboscis, just as he had endured it when it landed on his nose, without twitching the tip of his nose or wrinkling his face or whisking it away with his finger. [*]

The pain of the fly’s bite finally forced the cadi to blink.  He shut and opened his eye to try to dislodge the fly.  But the fly kept at him.  Finally the cadi moved his hand and attempted to whisk the fly away.  The fly kept returning.  The cadi tried to wipe the fly away with his sleeve, but he could not.  Ultimately the cadi humbled himself and acknowledged his weakness.  He addressed the fly out of the proper order of the day’s business.

In other bureaucratic news this month, Jan Banning has done an outstanding series of portraits of bureaucrats from around the world.  In our age of pervasive hostility toward bureaucrats, these portraits help everyone to understand that bureaucrats are living, breathing, flesh-and-blood human beings.

Dr. Paul M. Johnson at Auburn University has made freely available online a glossary of political economy terms.  The entry for bureaucracy states:

Bureaucratic organizations are typically charcterized by great attention to the precise and stable delineation of authority or jurisdiction among the various subdivisions and among the officials who comprise them, which is done mainly by requiring the organization’s employees to operate strictly according to fixed procedures and detailed rules designed to routinize nearly all decision-making. Some of the most important of these rules and procedures may be specified in laws or decrees enacted by the higher “political” authorities that are empowered to set the official goals and general policies for the organization, but upper-level (and even medium-level) bureaucrats typically are delegated considerable discretionary powers for elaborating their own detailed rules and procedures. Because the incentive structures of bureaucratic organizations largely involve rewarding strict adherence to formal rules and punishing unauthorized departures from standard operating procedures (rather than focusing on measurable individual contributions toward actually attaining the organization’s politically assigned goals), such organizations tend to rely very heavily upon extensive written records and standardized forms, which serve primarily to document the fact that all decisions about individual “cases” were taken in accordance with approved guidelines and procedures rather than merely reflecting the personal preferences or subjective judgment of the individual bureaucrat involved.

The full entry goes on much longer.  But even this meager collection of words should leave no doubt about the value of bureaucracy.

UK Prime Minister David Cameron reportedly will tell the Federation of Small Businesses that “by scrapping more than 3,000 rules ‘dreamt up by Whitehall bureaucrats,’ businesses will save over £850m a year.”  Misguided destruction of bureaucratic capability caused the decline of the British Empire.  The decline continues.