The figural design of the Julianus gravestone has generic forms.  The shape of the stone is like a simple building with a centered chimney or cupola.  At the peak of the stone are two doves symmetrically flanking a Latin cross.  Two figures symmetrically flanking a Christogram are a common early Christian design. The dove frequently occurred as a symbol in early Christianity.[2]  The doves on the Julianus gravestone seem to be using the vertical line of the cross to suggest doves carrying olive branches.  A dove carrying an olive branch is a sign of reconciliation from the biblical story of Noah.  A passage from a psalm declares:

My heart is in anguish within me,
the terrors of death have fallen upon me.
Fear and trembling come upon me,
and horror overwhelms me.
And I say, “O that I had wings like a dove!
I would fly away and be at rest.” [3]

The doves up against the top edge of the stone and the chimney/cupola are consistent with the idea of flying away to an eternal home.  These symbols broadly resonate in Christian understanding and are generally appropriate for gravestones.

Glory to you, Lord, who yourself alone understand the mystery of life and death. [4]

“Glory to God” opens an angelic song greeting Christ in the Gospel of Luke.  Those words adapt the opening of several psalms.  They were an early part of Christian liturgy.[5]  All the elements of the Julianus gravestone’s acclamation are attested in epigraphs ranging as far as southern Anatolia (Lycia and Corycus).  The mystery of life and death seems to refer to coming before god in judgment after death.[6]  The acclamation serves well generically for Christian gravestones.

Julianus’ epitaph is the last two lines on the stone.  It is specific to Julianus:

The sepulcher of Julianus {the most pious?} reader.[7]

Readers read scripture in the Christian Mass.  In the circumstances of low literacy, reader was an officially recognized occupation in the early Christian church.  Occupation was a common personal description included on ancient epitaphs.  Julianus’ epitaph would be completely normal as the sole inscription on a gravestone in ancient Athens.

Julianus’ epitaph seems to be a customization of a mass-produced Christian gravestone.  Julianus’ epitaph is written in considerably smaller letters than the acclamation.  Moreover, the epitaph’s lettering is considerably more uneven than that of the acclamation.  The epitaph looks like it was added to a mass-produced, generic Christian gravestone containing the figural design and the acclamation.  Some early Christian stones from Athens were oblique in their Christian references and meaning.  They are probably unique constructions serving highly particular needs.  The Julianus gravestone’s simple, easily understood symbols suggest that gravestones like it, with added, personalized epitaphs, served the demands of a mass market.

While one cannot be certain that the Julianus gravestone represents a customized instance of mass-produced Christian gravestones, considering that possibility at least highlights two important points.  First, artifacts that have survived over a long duration of history are not necessarily representative of the population that originally existed.  Second, scholars have tended to consider inscribed texts apart from the over-all context of the physical artifact.  More holistically considering the physical artifact can provide additional insight.[8]

[1] Sironen (1997), inscription #191, p. 234.  The Julianus gravestone is held in the Greek Epigraphical Museum (EM 403). The gravestone was broken and its left-side piece lost at an unknown time in its history.  The above image of the Julianus gravestone is from Feissel (1981) p. 485.  That work has been generously made available under a Creative Commons AT-NC-SA license.  The dating of this and other stones is based on the forms of the inscribed letters and the style of the writing.  Estimated dates could easily be off by two centuries. 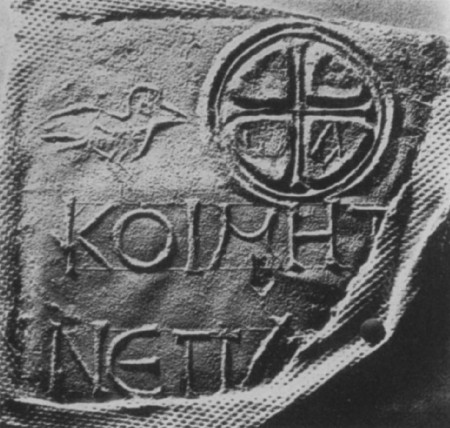 Another Christian stone from fifth/sixth-century Athens (Greek Agora Museum I-1070; Sironen (1997) # 332) has graffito-like inscriptions and a dove on the lower left: 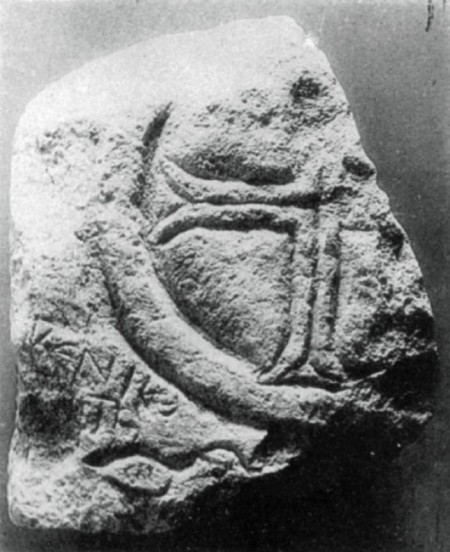 Images from Creaghan & Raubitschek (1947) Plate X.  Compared to the above stones, the Julianus gravestone is much more professionally designed.  Jenner (1910), p. 149, observes:

The Dove and the Fish were the two most recognized types of Christians during the first ages of the Church.

Here some analysis of a tax-paying fish in early Christianity.

[7] Sironen (1997) p. 234, adapted slightly.  The phrase “the most pious” is Sironen’s conjecture for the missing letters.  The rest of the epitaph can be reconstructed with little doubt.

[8] Stears (2000) makes this second point for Athenian gravestones from the fourth and third centuries BGC.

Stears, Karen. 2000. “Losing the Picture: Change and Continuity in Athenian Grave Monuments in the Fourth and Third Centuries BC.” Ch. 11 in Rutter, N. Keith, and Brian A. Sparkes. 2000. Word and image in ancient Greece. Edinburgh: Edinburgh University Press.