While Rome became the leading episcopate in the Christian church, Athens was largely forgotten.  The Athenian Parthenon was converted into a Christian church some time from the late fifth century to the late sixth century.  The uncertainty about the dating reflects the obscure record of early Christians in Athens.  Engraved stones from Athens in the early centuries of Christianity more directly indicate the obscurity of Christianity.  Early Christians in Athens weaved their faith closely into pre-Christian Greek culture. 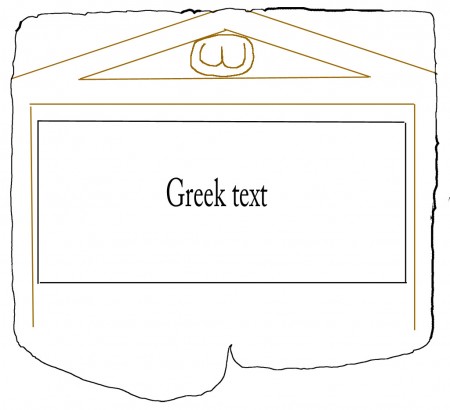 Consider the Asclepiodote stone from Athens in the fourth or fifth century.  It’s Pentelic marble engraved with a figural design and an epigram in Greek.  In English prose translation, the epigram declares:

O friend, have a look at the hallowed beauty of the immortal soul and of the body of Asclepiodote, for nature bestowed pure beauty in both.  (Even) if fate snatched her away, it did not overpower her, because when she died, she did not die alone.  Neither has she left her husband (for good), even though she did leave him; she now watches him all the more from heaven, rejoicing and keeping watch over him. [1]

The direct address of the stone to the reader (“O friend”) is a Greek epigrammatic convention from nearly a millennium earlier.  Asclepiodote is a theophoric name associated with the traditional Greek deity of healing, Asclepius.[2]  The immortal soul, nature, pure beauty, and fate are concepts associated with pre-Christian neo-Platonic thought.  The subtle insistence on the unity of body and soul hints at Christianity.  So too does the reference to heaven, not as the Elysian Fields, but as ouranos, a place in the sky.  Most significantly, the Asclepiodote stone features prominently the engraved Greek letter omega.  The Christian biblical book Revelation declares:

A fourth-century Roman catacomb mural depicts Jesus with the letters alpha and omega bracketing his haloed head.[4] The Asclepiodote stone, relating death, omega, and eternity, almost surely is Christian. But its Christianity is mixed with pre-Christian Greek culture in subtle and obscure (“she did not die alone”) ways. 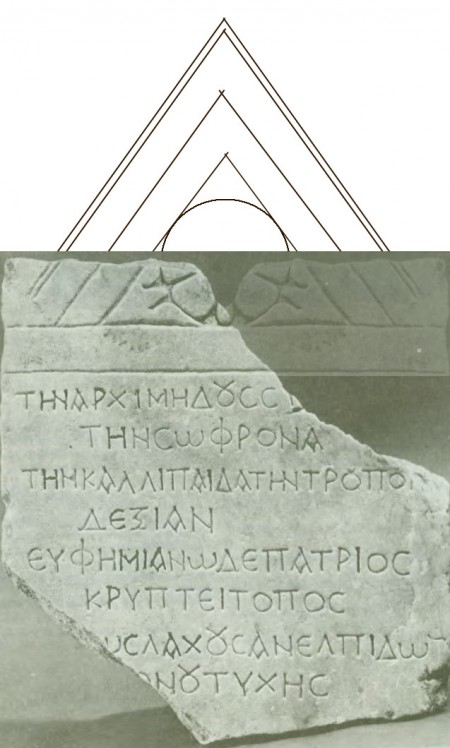 Archimedes’ wife,
the prudent one,
with lovely children, in her ways
capable,
Euphemia in her hometown
this place conceals;
*** obtained her hopes
** of fate. [5]

Archimedes is a relatively rare name, but it had a distinguished predecessor in a third-century BGC mathematician and inventor from Syracuse. The figural design on the Euphemia stone is elaborately geometric.[6]  It might implicitly honor the intellectual legacy of the famous Archimedes.  Euphemia was the name of a celebrated fourth-century Christian martyr from Chalcedon.  Like the Athenodora stone, the Euphemia stone has distinctive fourfold paratactic characterization of the subject.  The fourth paratactic phrase characterizes Euphemia ethically.  Jesus described himself as “the way” in the sense of journey.  Euphemia “in her ways capable” is directly ethical without an abstract sense of journey.  The epigram emphasizes geographic rootedness: “Euphemia in her hometown this place conceals.”  The epigram concludes with an obscure relation between “hopes” and “fate.”  Fate, a contrasting power in the epigram on the Asclepiodote stone, was a central idea in pre-Christian Greek religion.  Hope might be a contrasting Christian value in the epigram on the Euphemia stone.  The Euphemia stone might be obscurely Christian.

More certain than specific speculations about early Christian stones from Athens is the obscurity of their meanings.  The Asclepiodote stone, the Euphemia stone, and the Athenodora stone are all marble stones with extensive engravings.  Hence they represent considerable material investment.  All the stones contain epigrams.  Epigrams by the early Christian period were a highly subtle, literary art.  The figural designs on these stones don’t appear to be conventional and seem to relate subtly to aspects of the epigrams.  All these stones may just be funeral stones for the specific individuals.  But appreciating their meaning requires honoring their subtlety and considering them imaginatively.

[1] From ancient Greek trans. Sironen (1997) p. 168 (inscription #99).  The Asclepiodote stone is in the Greek Epigraphical Museum under inventory number EM 9928+9929.  Its epigram is IG. III2 1382.  The stone is pictured as Plate 5 (top) in Peek (1938). That photograph was the basis for my sketch above.  The omega is carved as an incision in a ovular, raised region.  The outer black line is the stone boundary.  The molded triangle at the top of the stone is common in classical Attic tombstones.  For images of classical Attic tombstones with a molded triangle on top (aetoma), see Clairmont & Conze (1993), Catalog Volume.

[2] A search of the online Lexicon of Greek Personal Names indicates that Asclepiodote wasn’t a rare name. Asclepiodoros / Asclepiodorus, the corresponding male name, was fairly common.  Among the tombstones found in Jewish cemeteries in Rome along the Via Labicana and Via Appia Pignattelli is a tombstone to Asclepiodote.  Lanciani (1902) Ch. 6.

[4] Bust of Christ from the Catacomb of Comodilla.

[5] The Euphemia stone is described and its epigram transliterated and translated in Sironen (1997) pp. 216-7 (inscription #168bis).  In the above text “*” represents a letter on a lost portion of the stone.  The above close, literal translation, respecting the lines, is mine, with help from some generous scholars.  Whether Euphemia obtained/achieved her hopes isn’t clear given the lost letters. 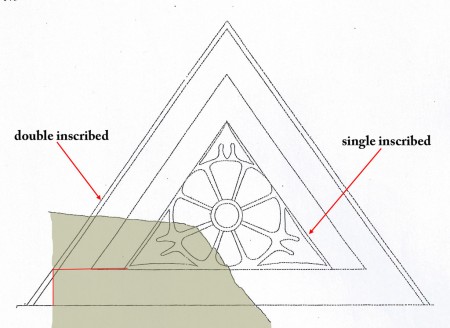 I’ve shaded the surviving portion of the Euphemia stone to emphasize the extent of the reconstruction.  The baseline of the inner triangle actually extends to the outer triangle.  Thus rather than being part of the figural design, the lowest line is better understood as creating a rectangle dividing the text from the figural design.  The double-inscribed outer triangle lines are a distinctive feature that the Euphemia stone shares with the Athenodora stone.  The inner triangle is not perfectly symmetric.  The bottom two angles are 54 degrees each.