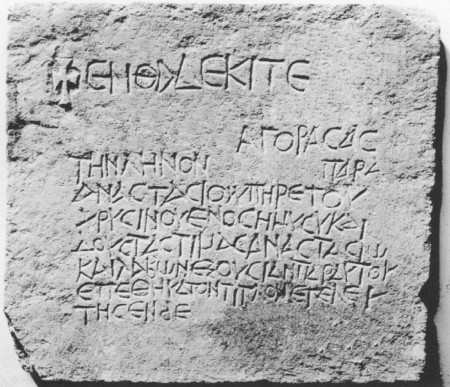 In sixth-century Corinth, a Christian epitaph for Maria, the wife of Euplous, apparently was made from a production-to-stock stone with a generic inscription.  Additional inscription personalized the epitaph for Maria.  Here’s the inscription, translated into English organized in accordance with the lines of the Greek inscription:

Here lies {Maria},
{the modest spouse of Euplous,
the charioteer}.  Purchased
the grave {Euplous} from
Anastasios the subdeacon
for one and one half gold pieces;
I gave the purchase price to Anastasios,
received full rights from him,
and put the epitaph in place.
died {my blessed wife
the eleventh day before the Kalends of September} [1]

The words enclosed in braces {} above represent the personalized inscription for Maria.  Bracketed between the conventional “here lies” and “died” in the production-to-stock inscription is important public documentation of Maria’s right to be buried in the associated grave. 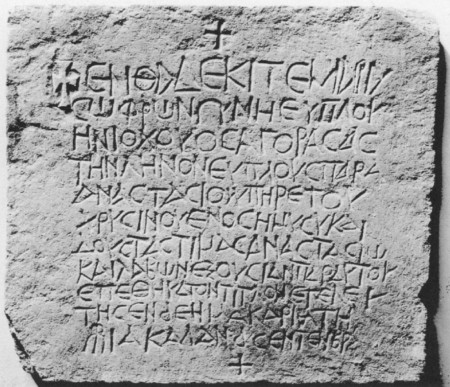 Knowledge about the retail market for tombstones in the ancient Mediterranean world is sparse.  The Maria epitaph’s production-to-stock inscription is specific to the minor church official Anastasios.  The stone on which the epitaph was cut is a thin, schisty-marble rectangle.  It appears to be builder’s surplus from slabs used for floors and wall decorations.[2]  Anastasios may have had a stock of such slabs with pre-cut inscriptions.  The production-to-stock epitaph slabs may have been a standard component in Anastasios’s business of selling graves.  The point of pre-inscribing documentary language may have been to ensure standard, authoritative terms for the selling of graves.

The existence of production-to-stock stonework in the ancient Mediterranean world has been a matter of scholarly controversy.  One leading work on classical Attic tombstones has observed:

The topic of tombstones ready-bought or commissioned can be discussed in only very hypothetical terms … one cannot but conclude that memorials already completely finished — save for the inscriptions! — lacked attraction for the buyer. [4]

A recent detailed analysis of the economics of the Roman stone trade concluded:

larger stone objects—architectural elements, sarcophagi, statues—were expensive, complicated projects that consumed enormous quantities of labour and material, and usually had to be tailored to the specific needs of the customer. … production-to-stock of these objects was probably never the norm. In the main such items were entirely ill-suited to this mode of production, with the possible exception of roughly squared blocks or perhaps simply hollowed-out sarcophagus chests. [5]

However, a leading work on classical Greek sculpture noted that about sixty classical Athenian gravestones were produced per year from about 430 to 317.  This work states that evidence suggests a market for ready-made (production-to-stock) gravestones:

Standardization of any sort is rare until after ca. 400, but then increases dramatically along with the actual number of stelae produced.  Simultaneously the range of compositioned schemes decreases markedly, and high-relief stelai with multiple figures come more into vogue, where it is often impossible to tell who is dead if the inscription is missing.  Even when it survives, the deceased’s name sometimes does not even correlate in sex or positioning with the figure who is the center of attention. [6]

The Maria and Julianus epitaphs are much less costly than sarcophagi and classical Greek tombstones with elaborate sculptures.  Economic arguments against production-to-stock are capital outlay, market risk, and foregone opportunities for customization.  Those arguments are rather weak for the specific circumstances of the Maria and Julianus epitaphs.

[4] Clairmon & Conze (1993), Introductory Volume, p. 67.  Id. p. 68 suggests that production-to-stock may have occurred for children’s tombstones.  Many tombstones had inscriptions added, e.g. an additional family member buried in the tomb.  Id. Vol. VI, pp. 71.  Many tombstones also had inscriptions erased and re-inscribed.  Id. Vol. VI, pp. 148-9.  Like Shakespeare’s tomb, early Christian gravestones warned against tampering with the tomb.  For example, a Christian epitaph from Attica, probably from the fourth century, begins with a cross and declares:

Sepulcher of Andreas and Athenais and their child Maria; they have lived through a good life. If anybody has the impudence to open up (the grave) and bury another (person), he shall have the lot of Judas and total darkness shall overwhelm him and God shall destroy him on that Day (of Judgment).