Roman literary men notoriously refused to demean their pages by specific references to Christianity, towards which the governing class felt a social as well as an ideological revulsion; Apuleius would certainly not be alone in this respect. [1]

In Apuleius’s Metamorphoses, a highly derogatory depiction of a baker’s wife worshiping purportedly the “one and only” god and imbibing wine early in the morning almost surely implicitly refers disparagingly to Christians. Scholars have suggested other disparaging, indirect references to Christianity in Apuleius’s works.[2] Yet perhaps as result of classical scholars lack of appreciation for medieval literature, Apuleius’s intriguing story of a house being magically translated seems to have attracted no relevant analysis. That story has clear structural parallels to the medieval Christian story of angels translating the house of Jesus’s family from Nazareth to Loreto. Apuleius may well have been mocking a much earlier, but similar Christian account.

Apuleius’s reference to a house being translated occurs in the Metamorphoses within the account of Socrates’s marriage to the witch Meroe. Because of Meroe’s evil deeds, the people of her town decided to stone her. She in response with supernatural powers bound everyone within their homes. After two days of not being able to get out, the people solemnly swore that they would not harm Meroe and would help her against anyone who sought to do her harm. Meroe then released them. She, however, acted further against the man who had led the town assembly to the decision to stone her:

But the man who was responsible for that assembly she transported in the dead of night, together with his whole house, that is, with walls and the floor itself and the entire foundation, locked up as it was, away to the one hundredth milestone into another city, which was situated on the highest top of a rugged mountain and because of that without water. And since the close-built houses of its inhabitants did not offer enough space for their new guest, she threw down the house in front of the city gate and left.

An extensive commentary on the first book of the Metamorphoses observes, “There is no parallel in ancient witchcraft for this particular feat.”[4] 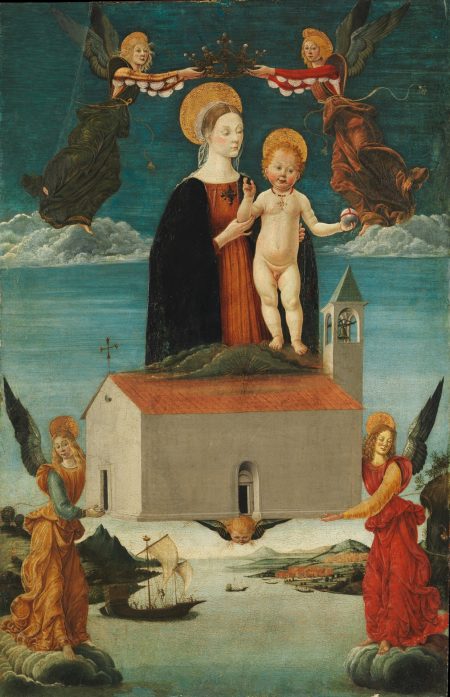 A medieval Christian story tells of angels transporting Jesus’s childhood house from Nazareth to Loreto. According to pious reports, in 1291, just before the expulsion of the crusaders from the Holy Land, angels transported the holy family’s house from Nazareth to a hill in Trsat, Croatia. When Turks took Albania in 1294, the house was potentially threatened. Angels then transported it across the Adriatic to a wooded area near Recanati, Italy. Bandits, however, were troubling the many pilgrims coming to the house. To improve public safety, angels in 1295 transported the house from there to a hill in Loreto. The Holy House become a prominent Christian pilgrimage site. The lavish Basilica della Santa Casa was erected about it late in the sixteenth century. It, and within it the Holy House from Nazareth, stand in Loreto to this day.[5]

The Metamorphoses’s transported house makes sense as an anti-Christian recasting of a Christian tradition like that concerning the Holy House in Loreto. Christians regarded as plausible the supernatural transport of a whole house across a long distance. Locating a city on a mountaintop lacking water makes little worldly sense. But in Christian understanding, a mountaintop is place to encounter God. A city on a hill signifies Christian civilization. Moreover, Christians transformed into sacramental material the mundane substances water, bread, wine, and oil.[6] In the Metamorphoses, a witch transporting a house to a spot outside a city gate on a mountaintop lacking water works as a thoroughly Apuleian travesty of a popular Christian story.

Sometime before Apuleius wrote the Metamorphoses in the mid-second century, Christians may have spoken of the Holy House of Nazareth, or some other hallowed house, being transported elsewhere. The North African city of Alexandria, with its early, vibrant Christian community, would have been a worthy destination. With inspiration, you can imagine that ancient tradition changed into new forms in the Metamorphoses and in the medieval story of the Holy House of Loreto.

That vile woman lacked not a single fault. Her soul was like some muddy latrine into which absolutely every vice had flowed. She was cruel and perverse, crazy for men and wine, headstrong and obstinate, grasping in her mean thefts and a spendthrift in her loathsome extravagances, an enemy of fidelity and a foe to chastity. Furthermore she scorned and spurned all the gods in heaven, and, instead of holding a definite faith, she used the false sacrilegious presumption of a god, whom she would call “one and only,” to invent meaningless rites to cheat everyone and deceive her wretched husband, having sold her body to drink from dawn and to debauchery the whole day. …  But an old woman who was a confidante of her debaucheries, and acted as a go-between in her affairs, was her inseparable companion all day every day. With her, first thing in the morning after breakfast and then some preliminary exchanges of strong wine, she would construct deceptive charades with cunning twists for the downfall of her poor, wretched husband.

Two points, I would suggest, now seem established beyond reasonable doubt: not only was Apuleius aware of the existence of Christianity, but he did not feel much sympathy for it either.

[3] Apuleius, Metamorphoses 1.10.5-6, Latin text and English translation from May (2013) pp. 74-5. For civitatem May translated “town,” as does Hanson (1989) p. 19. But “city” is also possible, particularly given close-built houses and the gate (ante portam). I’ve substituted “city” above. That helps to bring out the anti-Christian allusions that I perceive.

How the Holy House came to be in Loreto is, of course, controversial. MacDonald (1913) and D’Anghiari (1967) argue for miraculous translation. Kerr (2012) and Hesemann (2016), Ch. 5, assert that the aristocratic Angelos family shipped the stones of the Holy House from Nazereth to Loreto. That position is based on a medieval document called the Chartularium culisanense. Nicolotti (2012) argues that the Chartularium culisanense is a forgery.