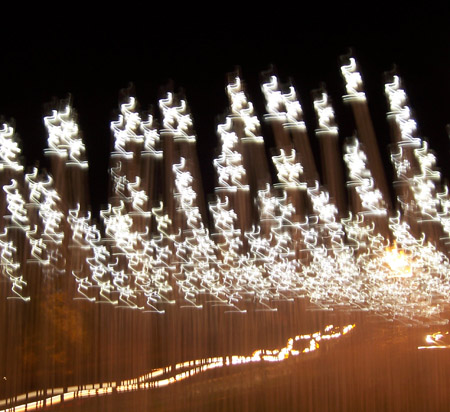 CO2LED promotes the use of alternative energy sources as well as recycling and responds to Arlington’s environmental initiative, FreshAIRE (Arlington Initiative to Reduce Emissions). … The use of energy-efficient, solar-powered LEDs, rather than conventional incandescent bulbs, has the power to significantly reduce the release of carbon dioxide (CO2) into the environment. Conventional lighting, fueled by power plants which generate energy through burning fossil fuels, requires far more energy than LEDs, resulting in increased carbon dioxide emissions. Being solar-powered, CO2LED produces long-lasting illumination, free of toxic by-products.

Robert Gay is an enthusiastic support of the Arlington arts scene, while Butch Anthony has already made a great contribution to Arlington with his magnificent bike kiosk.

Bicyclists breathing, regrettably, produce CO2. But the effects of all gaseous output from a local cycling team probably has less effect on global warming than does an equivalent number of cows farting. Economic analysis, by a duly certified economics Ph.D., indicates that, on balance, cycling is good for people and the environment. So get on your bike, ride past CO2LED, and breath some of Arlington’s fresh air!