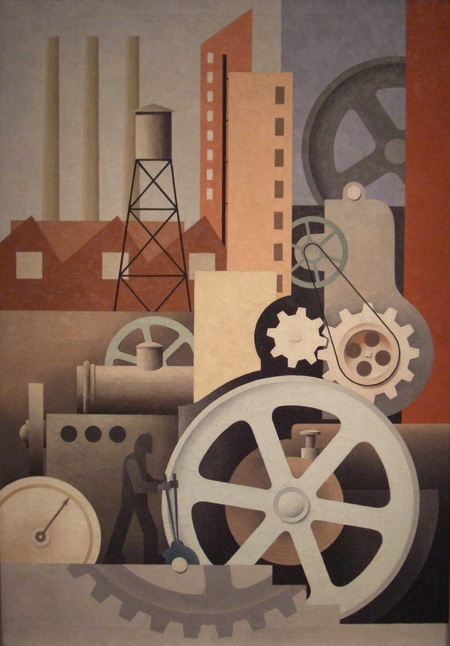 The Smithsonian American Art Museum’s exhibition, 1934: A New Deal for Artists, captures well the challenges of bureaucratic work. In the midst of the Great Depression, U.S. President Franklin Delano Roosevelt established the Public Works of Art Project.  It was a pioneering project that enabled artists to become part of an important national bureaucracy.  Paul Kelpe created the above painting for this project.  The exhibition label explains:

Kelpe’s mechanism manufactures nothing. He was actually an abstract painter whose concerns were aesthetic. In his paintings for the Public Works of Art Project, he knew that he needed to somehow address “the American Scene.” “As they refused to accept ‘nonrepresentational’ art,” he said, “I made a number of pictures with geometric machinery.” But Kelpe, unlike the many PWAP artists who factually depicted industrial scenes, studied no real-life factories. He created his own independent visual world, reflecting the kind of technological progress of which Americans were proud.

All bureaucrats should be proud of Kelpe’s excellence in meeting bureaucratic requirements. Unfortunately, Kelpe was not able to maintain his early brilliance:

The Chicago branch of the Public Works of Art Project hired him to create murals, but his designs were criticized for being too abstract. A few years later, however, he was asked to resign from the American Abstract Artists because his work was too representational!

American Abstract Artists is active today. To date the organization has produced over 75 exhibitions of its membership in museums and galleries across the United States. AAA has published 12 Journals, in addition to brochures, books, catalogs, and has hosted critical panels and symposia. [from Wikipedia]

AAA has probably also scheduled thousands of meetings.  Quite impressive, especially for an artists’ organization.  Kelpe, banished from the AAA, subsequently spent decades struggling with poverty and facing starvation.  His sad story testifies to the importance of maintaining position.

In related artwork, Lise McCarty’s work Time Sheet is on display at the Arlington Arts Center.  The works section of McCarty’s website explains:

For each day I worked in 2008 I blotted my face with an oil absorbing sheet in order to translate a day at the office into a unique corresponding print.

Some may wonder whether their work has any effect.  McCarty clearly is making a mark with each of her days at the office.

In this month’s other bureaucratic highlights, Cycle Smart Dallas offers an interesting discussion of bike lanes.  I agree that “coffin corner” bike lanes are a real danger.  From a cyclist’s perspective, the solution is to move out of the bike lane when that’s the safest action. While the League of American Bicyclists may be corrupt, a general attack on bureaucrats does nothing for cyclists and isn’t warranted.

DC’s Improbably Science includes an interesting memo outlining an operational re-organization that would facilitate the achievement of a finish for Schubert’s Unfinished Symphony.  Here’s an example of one of the action point plans:

No useful purpose would appear to be served by repeating with horns the same passage that has already been handled by the strings. If all such redundant passages were eliminated, as determined by a utilization committee, the concert could have been reduced from two hours to twenty minutes with great savings in salaries and overhead.

Displaying scant regard for scientific logic, the post inexplicably goes on to condemn the effect of bureaucracy on creativity.

B.Y. Clark at The Bureaucrat asks:

Why the strong opposition to government bureaucrats and so little to private sector ones? Do we choose a bureaucrat with a profit motive or one with a potential public service motivation?

Ignorance, confusion, and a poor grasp of reality are, I think, the answers to these questions.

Here is a photo of meerkats, who are quite cute and attractive, just like bureaucrats.

That’s all for this month’s Carnival of Bureaucrats.  We regret to inform you of a small change that we have been compelled to make.  The Blog Carnival website is mainly a source of spam submissions to our carnival.  Hence, we are regretfully changing the application procedure.  Applications to be included in this carnival will now be processed through a custom-designed Form 376: Application for Bureaucratic Recognition. Note that all applications must conform to Carnival regulations.