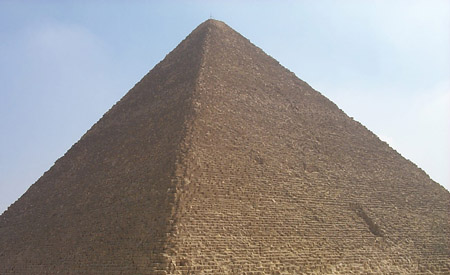 About 10,000 workers, working three-month shifts, took more than 30 years to build the pyramid. Today bureaucratic work has intensified to year-round shifts, and most bureaucratic projects typically take a decade before the business is finished.

But the nature of bureaucratic work — repetitive piling of similar pieces higher and higher — has not changed in the roughly 3,500 years since the Great Pyramid was built.  Adel Okasha, supervisor of the excavation, noted of the workers, “Their skeletons have signs of arthritis, and their lower vertebrae point to a life passed in difficulty.”  Many bureaucrats suffer from difficulties moving and have weak spines.  Poor sitting positions are a major cause of bureaucratic spinal problems.

Bureaucrats persevere, despite the hardships, because they understanding the enduring importance of their work.  Dieter Wildung, a former director of Berlin’s Egyptian Museum, observes, “The world simply could not believe the pyramids were build without oppression and forced labor, but out of loyalty to the pharaohs.”  Bureaucrats are stolidly loyal to their leaders and willing to sacrifice for their organizations. The result is astonishing monuments of bureaucracy readily visible today.

In other bureaucratic news this month, Theodore Dalrymple lectures on the great entrepreneurial economist and bureaucratic champion John Kenneth Galbraith. Galbraith, whose name is similar to Galbi, harvested a key insight:

Galbraith pointed out (though it was not a new insight, as he acknowledged) that large corporations’ managers developed interests of their own and, furthermore, that their powers often came to exceed those of the stockholders who actually owned the corporations. Not maximal profit to the stockholders, but maximal advantage to themselves, was the managers’ goal; in fact, the managers were bureaucrats, not entrepreneurs. The classical model was thus defunct as a reflection of reality. And perhaps more important to Galbraith was that the moral and economic superiority of private over public enterprise collapsed, for both were run by bureaucracies.

The unifying value of bureaucracy transcends trivial and hackneyed arguments about public versus private enterprise.  What’s good for bureaucracy is good for your country.

Almost all scientists today are bureaucrats. For scientists with administrative positions in professional societies, it goes without saying. But not all bureaucrats are evil, dishonest people. Far from it.

Civil Liberties Australia pointlessly complains that bureaucrats requested a three-year sleep diary.  Sleep is important to bureaucrats.  It should be important to you, too.

Roman Jones at Blazing Torches reports that the European Commission (EU) has produced a children’s comic book telling the fictional story of two EU bureaucrats’ humanitarian work.  We believe such fiction is good for children.

The U.S. Office of Personnel Management has renamed its “Federal Human Capital Survey” to “Federal Employee Viewpoint Survey”.  We applaud this change, which underscores the actual personhood of human capital. The news release concludes:

OPM will be encouraging the government’s Chief Human Capital Officers to use the data to help them with their workforces, and it is expected that agency managers will make a sophisticated assessment of their own human capital management and develop an action plan for improvement.

We believe that the name-change committee should produce an action plan before the Chief Human Capital Officers begin their planning meetings.

Thanks to Paul Mannix for sharing the photo from which I derived the above image.