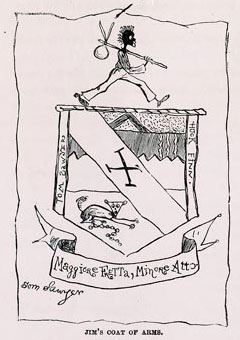 In a bureaucracy, merely getting the job done isn’t sufficient. The job must be done in the regular way, as described in authoritative books. Bureaucrats fulfilling requirements for continuing bureaucratic education credits should study in detail Tom Sawyer’s actions in freeing his imprisoned, formerly enslaved friend Jim.  Rather than reveal that Miss Watson’s will had manumitted Jim, Tom Sawyer worked hard to free Jim by the books.  Tom persevered despite his friend Huckleberry Finn’s misgivings.  Concerning just one part of the job, Tom explained to Huckleberry:

“It don’t make no difference how foolish it is, it’s the right way — and it’s the regular way. And there ain’t no other way, that ever I heard of, and I’ve read all the books that gives any information about these things. They always dig out with a case-knife — and not through dirt, mind you; generly it’s through solid rock. And it takes them weeks and weeks and weeks, and for ever and ever.”[*]

Huckleberry Finn lacked a formal education. Nonetheless, he had much common sense: “if it’s in the regulations, and he’s got to have it, all right, let him have it; because I don’t wish to go back on no regulations.” Tom Sawyer and Huckleberry Finn are not just great American heroes; they are also great bureaucratic heroes.

In other bureaucratic issues this month, no one should doubt that Nokia, a venerable business organization founded in 1871, will remain a communications industry giant.  Nokia CEO Stephen Elop recently described, in a coded way, Nokia’s key business advantage:

At the lower-end price range, Chinese OEMs are cranking out a device much faster than, as one Nokia employee said only partially in jest, “the time that it takes us to polish a PowerPoint presentation.”

The Nokia developer community has taken the lead in developing plans.  Nokia Plan B has attracted considerable attention.  A large number of additional prototype plans briefly were visible. Now, however, these prototypes have been hidden behind an apple-like skin of secrecy.  When these additional plans are formally introduced publicly, they are certain to create a stir among consumers.

Microsoft, another leading example of bureaucracy, recently suffered a minor setback with a Windows 7 Phone update.  The underlying problem appears to be lack of sufficient options in the UI for a firmware reset.  An insightful article explained:

With a wider set of options, users are more likely to find such mobile games entertaining.

Who would you trust more with your own personal genetic information, yourself or the American Medical Association?  The answer is obvious.  To avoid the risk of mistakes, the American Medical Association apparently is seeking to forbid persons freely gaining access to their own genetic information. No person, including yourself, cares about you like a bureaucracy does.

[*] Adventures of Huckleberry Finn, Ch. 35.  The subsequent quote above is from the same chapter.