The shift from scroll to codex in the Roman Empire seems to have been more a matter of perceptions of fashion and authority than of economic and technological advantages.  About 85 GC, the Latin poet Martial boasted that his epigrams were available in a convenient parchment codex:

You who long for my little books to be with you everywhere and want to have companions for a long journey, buy these ones which parchment confines within small pages: give your scroll-cases to the great authors – one hand can hold me.[1]

Despite the advantages Martial described, codices amount to less than 20% of surviving literary and scientific books from his and the next two centuries.[2]  The great authors existed on scrolls.  The prestige they gave to scrolls seems to have outweighed the advantages of codices for centuries after codices were produced and promoted.[3]

Early Christians early and uniformly used the codex for high-value copies of scripture.  Christian New or Old Testament scripture from the early centuries of Christianity does not exist in a new (non-recycled / recto side) roll form.  Yet in the first three centuries after the birth of Jesus, pieces from more than fifty Christian New or Old Testament codices have survived in Egypt, including fragments of an estimated 130-page codex of the Gospel of John probably from early in the second century.[5]  Christians didn’t invent the codex.  Christians, however, apparently used exclusively the codex for recording their scripture.

Roman codices, meaning legal documents written on wooden tabulae, plausibly were the prototypes for Christian  papyrus codices.  The Jewish Revolt against Rome, 115-117 GC, resulted in carnage in Alexandria, a leading center of closely intertwined Jewish and Christian life.  Perhaps political fallout from the Jewish Revolt prompted Christians to differentiate themselves from Jews and signal affiliation with Rome through the use of the codex for Christian scripture.[6]  But another possibility is more in keeping with the upside-down Christian vision.  Christians rejected the elite status competition centered on Greek literature.  With codices, Christians set themselves apart from that type of literature and life.  Moreover, while Christians did not seek the violent overthrow of the Roman Empire, they envisioned a higher kingdom and a greater savior than the Roman emperor:

the name that is above every name, so that at the name of Jesus every knee should bend, in heaven and on earth and under the earth, and every tongue should confess that Jesus Christ is Lord, to the glory of God the Father.[7]

Christians putting such scripture into a papyrus codex may have been a silent, but successful, revolt against Roman authority. 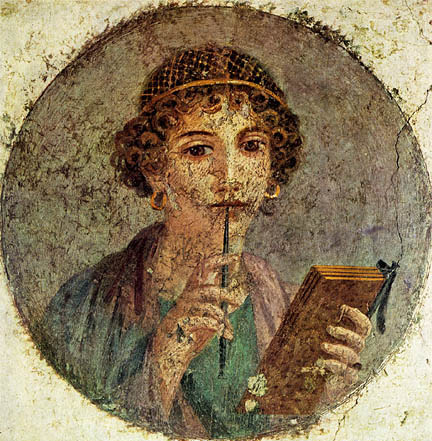 [2] Kraft (2008), p. 37.  The share of codices are for Greek literature.  The number of surviving Latin books (text artifacts) from the first three centuries is relatively small.

[3] As a text storage technology, the codex has important advantages over the scroll.  Because the rolling of a scroll is not easily reversed, a scroll typically has writing on only one side of the writing material.  Hence for the same text, a book requires only roughly half as much writing material as does a scroll.  In addition, the scroll is a sequential access technology.  Just as for a magnetic tape, you have to scroll through to access a point in the middle.  The codex, in contrasts is a random-access technology like a disk drive.  You can access the text from any book page by seeking to open the book at that page. The main technological disadvantage of the codex relative to the scroll is that the codex requires slightly more skill to produce (the skills to cut uniform writing material and to make a binding and a cover).

[7] Philippians 2:9-11 (RSV translation).  This text is replete with imperial terms enlarged in application to Jesus.  Matthew 22:15-21, with reference to a Roman coin, undermines the divine pretensions of the Roman emperor.

Kraft, Robert A. 2008.  The Gestation of the Codex, stage one adaptation of Colin H. Roberts and T. C. Skeat, The Birth of the Codex London: Oxford University Press, 1983.