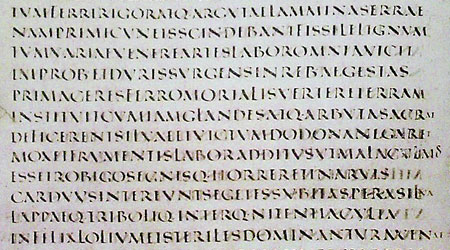 Reading practices affect how text is organized within books.  Ancient Greek elite culture emphasized voiced reading of texts with acute concern for diction and style.  Ancient Greek texts, and beginning in the second century GC, Latin texts, were written in capital letters without any spaces between words, without any punctuation, and without any division among sentences, paragraphs, or chapters (scriptio continua).  That textual organization supported intensive teaching and rehearsal in declaiming a specific text.

Spacing between words and other textual articulations support rapid silent reading oriented towards conceptual reasoning.  In Europe, protoscholastic Irish monks at the periphery of elite classical reading practices pioneered word spacing in Latin in the seventh and eight centuries.  This textual practice gradually spread east and south across Europe in subsequent centuries.  Word separation became normal in French manuscripts only in the eleventh century.[1]  Flourishing scholasticism in twelfth and thirteenth century France generated highly articulated texts with section labeling, section numbering, and script and layout distinctions.  Standard numbering of chapters in the (Latin) Bible began in Paris about 1230.[2]  These textual features served readers who were silently reading, analyzing, and referencing specific pieces of text.

He delved deeply into Galen’s books and wrote commentaries on many of them. He divided each of the “Sixteen Books” in parts, chapters and paragraphs in such a manner as had never been done before.  This has proved of great help to users of Galen’s books, for it facilitates locating what is wanted, furnishes references to any topic which is desired to be studied and gives information about the contents and purposes of any portion.  He divided many of the works of Aristotle and others in the same way. [3]

This description explicitly links conceptual study (writing commentaries, referencing topics to be study) to articulating the text.  The reference to direct access to any portion of the text almost surely implies a text-numbering scheme.

Textual study by Arabic scholars in the tenth century and European scholars in the thirteenth century produced similar textual articulations.  The division of a text into words, sentences, paragraphs, and chapters is easy to take for granted today. Such textual organization, however, developed only in circumstances of conceptual textual study.

[2] Blair (2010) pp. 38-9.  Dominicans of the House of St. Jacques in Paris  introduced chapter numberings in a bible concordance that they created from 1230-47.  The printer Robert Estienne introduced Bible verse numbering in a New Testament that he printed in 1551.

[3] HP p. 473.  Ibn Abu al-Ash’ath was active about 960 GC.  Arabic texts always had word separation.  Ancient Arabic, like ancient Hebrew and other ancient Semitic texts, was written without vowels.  Hence word separation was necessary for unambiguously interpreting a text.  Knowledge transmitted to Europe through Arabic texts contributed to the development of word separation in Latin:

Arabic scientific writings, when translated into Latin, brought word separation with them and formed the earliest body of writings to circulate invariably in word-separated text format.  In these writings, untranslated Arabic phrases, written in Latin transliteration, were always separated, unlike analogous Greek passages in Latin texts, which had been written in unseparated script, except when copied by Irish scribes.

Saenger (1997) pp. 124-5.  Apparently not recognizing the evidence from ibn Abu Usaibia, Blair (2010), p. 26, locates in thirteenth-century Egypt the Arabic development of “hierarchical and numbered divisions of the text, running heads, lettering of different sizes and colors, and tables of contents.”