Monks and sailors are at opposing ends of popular imagination.  Monkish types are generally imagined to be quiet, solitary, bookish, and unworldly.  Sailors, in contrast, are associated with drunken, salty-talking, brawling, world-wandering men with a girl in every port.  Despite these contrasting images, Matthew of Edessa, a twelfth-century Armenian Christian monk, figured himself within the Islamic Abbasid legend of Sindbad the Sailor.

Matthew of Edessa is an unlikely figure of a sailor.  Edessa was not a port town but an inland city in upper Mesopotamia.  Edessa was a leading center of early Christian intellectual life.  Edessa also had been home to an icon, thought to have been divinely created, that showed Jesus’ face.  Matthew of Edessa described himself as an “elder of a monastery.”  He evidently was part of a large fraternity of clergy, monks, and religous scholars.[1]  He emphasized that for fifteen years he engaged in “ceaseless research” within Edessa as preparation for writing his chronicle.[2]  The framework for Matthew of Edessa’s chronicle is prophesied, God-imposed suffering for historical sins. 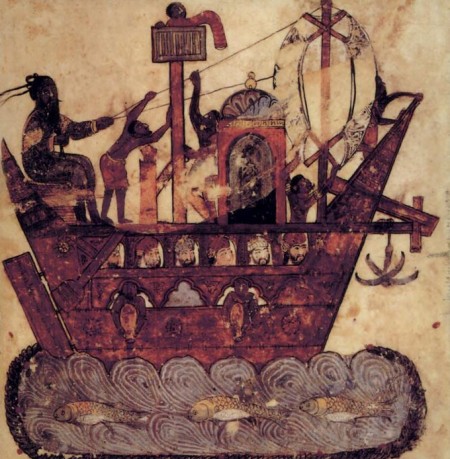 Matthew of Edessa literally described himself like a passionate sailor, eager for profit, pushing aside historical memory of suffering.  After halting writing his chronicle for a number of years, Matthew began writing again.  He explained:

And so I, Mattʿēos, became passionate about this {writing a chronicle} and I wished to return along that same thematic thoroughfare, like one who roamed for many years about the great universal ocean sea, and was driven mad by many tribulations, and after the tempest would go to his home in peace. And upon contemplation he might remember his love of great profit, then he bears nothing in mind of his past troubles, and with great eagerness hastens to return to the same sea-voyaging. So by this example let us also return to the point in the book {Matthew’s chronicle} at which we left off [3]

Matthew of Edessa almost surely had no seafaring experience.  As an elder of a monastery within a well-institutionalized consecrated community in the inland city of Edessa, he probably had never met a sailor.  His chronicle values historical memory and records the realization of prophecy.

Matthew of Edessa’s figure of the sailor, unmindful of his history, yearning for the sea, probably came from Matthew’s reading of the legend of Sindbad the Sailor.  That legend was popular in the Islamic world no later than the early tenth century.[4]  It could have easily reached Edessa through neighboring Muslim peoples by the early twelfth century.  In that legend, Sindbad the Sailor comes from a wealthy and prominent family in Baghdad in the time of the caliph Harun al-Rashid.  As a young man, Sindbad the Sailor squanders his inheritance through epicurian living.  He then remembers poetry:

It is through toil that eminence is won;
Whoever seeks the heights must pass nights without sleep. [5]

Sindbad the Sailor thus decides to go to sea as a sailor-trader.  The Sindbad legend consists of episodes of Sindbad the Sailor going to sea, enduring hardships and terrors, returning to Baghdad wealthy, and then being drawn to the sea again.  Here’s one such account:

I was delighted at my safe return …. I enjoyed the company of my friends and companions,  and was more prosperous than ever, forgetting the time that I had spent abroad, together with the toils and distress that I had suffered and the terrors of the voyage. … I was enjoying a life of the greatest pleasure until one day I got the idea of traveling {again} to foreign parts, as I wanted to trade, to look at other countries and islands, and to earn my living. [6]

Through forgetting the toils and distress he suffered, he went on to suffer similarly again.

All are created from a drop of sperm;
I’m like the next man and he is like me.
But oh how different are the lives we lead!
How different is wine from vinegar.
I do not say this as a calumny;
God is All-Wise and His Decrees are just. [8]

Such wisdom seems to have been within Matthew of Edessa’s consciousness as he recounted the holy vardapet Yovhannēs Kozern’s prophecies and worked on his chronicle.  As he researched history unceasingly, Matthew of Edessa sensed limits of historical understanding.

[2] In the author’s prologue to Book III, Matthew states that he has “spent many years in diligent research and, having collected {records} with a valiant will in the Mesopotamian city of Uṙha {Edessa}, I wrote up to this point.”  Trans. id. p. 302. Dostourian (1993) provides an English translation of the full chronicle.

[4] References to the tale of Sindbad exist in tenth-century Islamic writing.  The future caliph al-Radi (reigned 934-940) declared to courtly visitors checking on his reading:

Tell them who sent you,  “You have seen these books and found them to be books of tradition, jurisprudence, poetry, language, history, and the works of the learned — books through the study of which God causes one to benefit and to be complete. They are not like the books which you read excessively such as The Wonders of the Sea, The Tale of Sindbad, and The Cat and the Mouse.”

There was the book Sindbadh al-Hakim, which is in two transcriptions, one long and one short. … What is most probable and closest to the truth is that the Indians composed it.

[7] In his two prologues Matthew declares that he “enquired for a long time,” “engaged ceaselessly in research”; “my work of labour”; “ceaseless research”; “unceasing research”; “many years in diligent research”; “for 15 years we have been engaged in this work of research”; “we have been tireless.”  Phrases from trans. Andrews (2009).

[8] Lyons (2008) v. 2, p. 454 (night 537).  Wine and vinegar are elements in Jesus’ last supper and crucifixion in the Gospels.  What happened to Jesus is a matter of dispute within Islam.  In the poem and in the Sindbad legend, a fundamental theme is God’s will.  That is also a fundamental theme of Islam.

Andrews, Tara L. 2009. Prolegomena to a critical edition of the chronicle of Matthew of Edessa, with a discussion of Computer-Aided methods used to edit the text. Ph.D. Thesis. Oxford University.

Dostourian, Ara Edmond. 1993.  Armenia and the Crusades: tenth to twelfth centuries: the Chronicle of Matthew of Edessa. Lanham: University Press of America, National Association for Armenian Studies and Research.