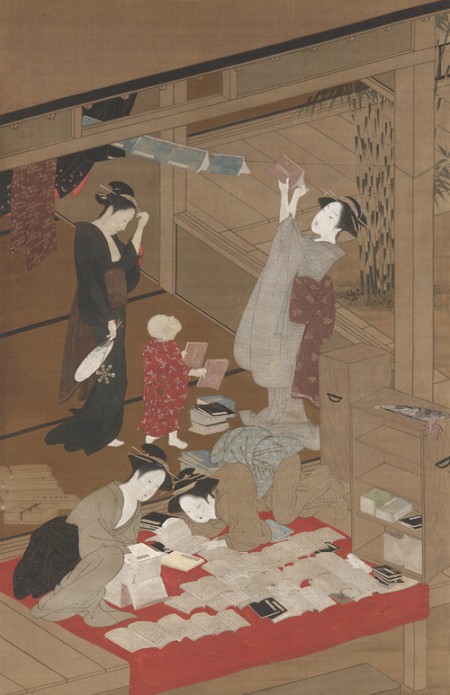 A large, silk scroll with a lavish patterned-gold border hangs at the entrance to a current Sackler Gallery exhibit.  The scroll is from late eighteenth-century Japan.  It shows four women and a boy engaged in mushiboshi for a large number of books — cleaning and airing the books to avoid their being damaged from mildew and insects. One woman, neglecting the task, is engrossed in reading one of the books.  Another woman adjusts her hair-piece.  A third, assisted by the boy, hangs a book on a line like the laundry hanging on another, nearby line.

This sumptuous scroll hangs at the entrance to the exhibit Hand-Held: Gerhard Pulverer’s Japanese Illustrated Books.  The exhibit shows cheaply bound, woodblock-printed illustrated books that became pervasive in Japan from about 1600.[1]  Most owners of these books probably did not treat them as precious objects to be carefully preserved.  The scroll reflects passively on the stark new order of communications.  Perhaps the scroll offered pleasure like that of elegy.  Perhaps it was commissioned for a publisher who got rich from the new, cheap, popular illustrated books.[2]

Japanese publishers by the eighteenth century used a variety of means to sell books widely.  Publishers vertically integrated from the commissioning and production of books to their retail marketing.  That business integration diversified book sales risk and allowed rapid response to popular tends.  Woodblock printing and cheap-quality bindings reduced book cost, while the development of cheap color printing increased the attractiveness of books.  Book illustrators created illustrations that crossed book gutters and openings as if those physical features did not exist and the book was like a more expensive scroll.  Chinese books were augmented with phonetic Japanese characters to make the books more accessible to persons without extensive eduction.  Publishers marketed sexually explicit content, which has always had popular allure.

Another marketing technique was serialization and encouraging collecting.  One publisher from 1836 to 1841 produced a series of 75 cheap, illustrated volumes.  The publisher also sold a roughly made bookcase for storing the whole collection.[3]  The bookcase emphasized that these books, pushed out at the amazing rate of 15 a year, should not be regarded as ephemera.  Marketing genius is being able to figure out how to deny the obvious.

While Hand-Held: Gerhard Pulverer’s Japanese Illustrated Books concerns popularization of media in Japan, it’s not a popularly welcoming exhibit.  The exhibit encompasses about 120 books, frozen open in glass cases.  That gives the exhibit the feel of a nineteenth-century display of stuffed animals.  Browsing the books in an active way is impossible.  The exhibit does not even allow non-flash photography.  The most attractive aspect of the exhibit arrangement is viewing the display cases from an oblique angle and seeing the books like a flock of butterflies. That view invokes a feeling that was probably like early popular joy in the numerous, widely accessible illustrated books that the exhibit displays. 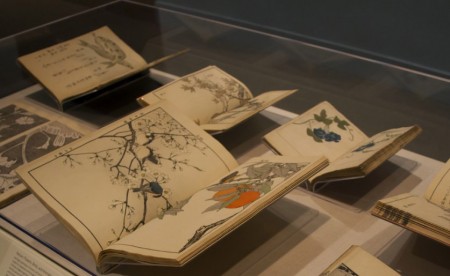 The Sackler Gallery is developing new media for access and interaction with the Pulverer Collection.  The online, scrolling display of a three-book series from the Collection is beautiful and insightful.  But that’s just a small taste of what’s to come.  The Sackler Gallery is working to make the entire Pulverer Collection available online with cover-to-cover images, detailed data and analysis.[4]  Incorporating such access technology with display of the physical objects would make for a much better exhibit.

Hand-Held: Gerhard Pulverer’s Japanese Illustrated Books is on display at the Arthur M. Sackler Gallery in Washington, DC, from April 6 to August 11, 2013.  Entrance is free and open to the public.

[1] The Japanese term for such books is ehon.  The Charles Nelson Spinks Collection at American University includes a substantial number of Edo-period ehon.  Wide circulation of ehon and other printed material in Edo-period Japan contributed to a unified Japanese body of public information.  See Berry, Mary Elizabeth. 2006. Japan in print information and nation in the early modern period. Berkeley, Calif: University of California Press.  Here’s an insightful review and response.  The scroll above shows books without illustrations.  Surely the scroll’s illustrator was aware of the prevalence of ehon.  The depiction of books without illustrations complicates interpretation of the scroll, but the fundamental idea seems clear.

[2] Included at the top of the scroll is a cuckoo flying (not shown above).  According to the Sackler’s description of the scroll:

The cuckoo flying overhead is often associated with images of courtesans or with poetry expressing love and longing.

The cuckoo seems to me to favor the elegiacal interpretation.

[4] Other interesting new-media projects in which the Freer/Sackler is participating include The Story of the Beautiful: Peacock Room Website, and the virtual Dunhuang exhibit.