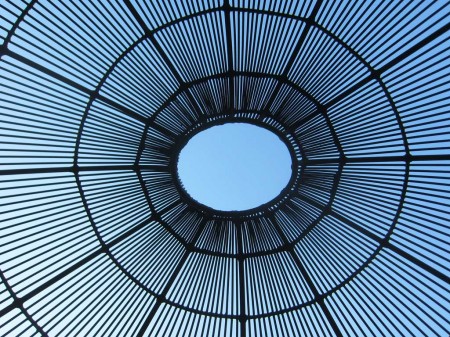 Some fishermen hauled up a half-eaten
Man, caught in a net full of flounder —
Wept-for remains of a lost voyage.

Rather than profit from ruin,
They buried the man and the fish in shallow
sand.

Land, here you have the whole shipwrecked man
Though, in place of the rest of his flesh,
You have those that ate it.

This epigram, attributed to Hegesippus, was written in Greek probably in the mid-third century BGC.  The last line could be funny.  The context, however, is mournful.  The fishermen have an ethical sense beyond profit as much as you can.  By burying the man and the fish in shallow sand, they enable both to be, with time, washed out into the sea.  The whole shipwrecked man, “wept-for remains of a lost voyage,” will move again from the land to the sea.  The half-eaten man and the fish caught in the net are the whole shipwrecked man, the continually transforming body in an unanchored world.

Latter-day Greeks, are we not dead
And only seem to be alive,
Having fallen on hard times,
Mistaking a dream for existence?
Or are we alive,
While our way of life has perished?

first epigram — from Greek trans. Wolfe (2013) p. 91.  On the dating of the epigrammist Hegesippus, about whom little is known, id. p. 175.  Id. describes this and the subsequent epigram as epitaphs.  They probably weren’t actually inscribed on tombs.  Epitaphs typically weren’t highly poetic.  In the above epigram translation, I’ve replaced “earth” with “land” for better poetic sense.  The epigram is GA 7.276.  The prose translation there uses “land” rather than “earth.”  The word “man” above shouldn’t be only understood as indicating a human being.  Men in ancient Greece faced a much higher risk of death on the sea because men predominated among long-distance commercial travelers and warriors.  Men today continue to face a much higher risk of accidental death than do women.

second epigram — from Greek trans. Wolfe (2013) p. 151.  The epigram also appears in GA 10.82.  It is attributed to Palladas of Alexandria, who lived in the fourth-century GC.  On the dating of Palladas work, Wilkinson (2009).  Palladas continued to follow traditional Greek religion after Constantine converted to Christianity.  Alexandria was a leading center of early Christianity.  Palladas lamented the new dominance of Christians.