Some bureaucracies prefer to have six managers drop a handful of three-bean mix on three workers’ desk.  Two managers are assigned per worker, with each manager dropping a half-handful of three-bean mix on the worker’s desk.  With three managers per worker, each manager drops a third of a handful.  One worker is responsible for aggregating and counting the red beans, one worker the brown beans, and one worker the green beans.  ABCA CBCE training guidelines don’t prescribe a specific procedure for how this is to be done.  Before the training exercise, management should meet and draw up a strategic training plan specifying whether workers should count each color bean before transfering them to the worker responsible for that color, or whether each worker should only count the beans of the color for which she is assigned.  The latter strategic plan is considered to have more bureaucratic merit. 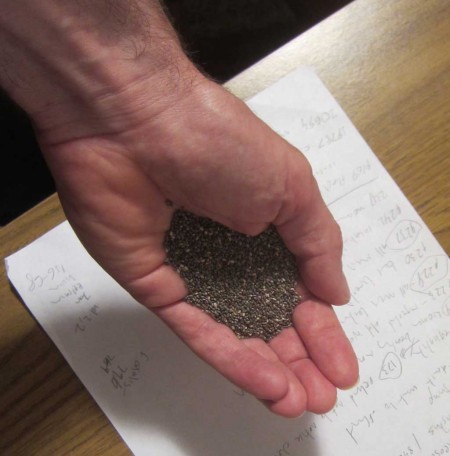 To develop industry-leading bean-counting skills, organizations shouldn’t limit themselves to bean counting.  A handful of quinoa kernels make for a much bigger bean-counting exercise than traditional beans.  The most advanced tool for bean-counting exercise are chia seeds.  Chia-seed counting can keep workers busy for many hours, if not days, with only minimal managerial effort in performing the work droppings.

To push worker skill development to the max, cook up the three-bean training beans and serve them to the workers with copious amounts of cheap soda pop.  Then give them a double handful of chia-seed counting.  In addition, give workers strict orders not to get up from their desks until they have double checked their chia-seed counts.  At the conclusion of that training exercise, workers will be well situated to take on the most bureaucratic of bureaucratic tasks.

In other bureaucratic issues this month, a scientific study published in Psychological Science indicates that listening to “When I’m Sixty Four” makes persons younger.  The study reports:

we asked {randomly} 20 University of Pennsylvania undergraduates to listen to either “When I’m Sixty-Four” by The Beatles or “Kalimba.” Then, in an ostensibly unrelated task, they indicated their birth date (mm/dd/yyyy) and their father’s age. We used father’s age to control for variation in baseline age across participants.

Psychological Science published Brandt’s 2011 study, “Sexism and gender inequality across 57 societies.”  Given that scholarly record, the study showing that listening to “When I’m Sixty Four” makes persons younger should be taken very seriously.

The New York Times, the world’s leading journalistic bureaucracy, has produced a report ominously titled Innovation.  Fortunately, that title is misleading.  The report is 97 pages long with a very attractive, panoramic cover sheet.  The contents of the report affirm fundamental bureaucratic principles.  Consider this quintessentially bureaucratic declaration from the report:

it is essential to begin the work of questioning our print-centric traditions, conducting a comprehensive assessment of digital needs, and imagining the newsroom of the future. (p. 7)

Consider a task force to explore what it will take to become a digital-first newsroom. (p. 96)

There is no reason for concern about democracy.  The New York Times will continue to be a pillar of American bureaucracy.

On Hacker News, an engineer and architect of large enterprise products has brilliantly described coding bureaucracy:

These things are never rewritten or refactored. They slowly evolve into a behemoth ball of mud which collapses under its own weight to the detriment of customers, a team of enterprise architects (usually from ThoughtWorks etc) usually appear at this point then attempt to sell outsourcing services who will “fix all the shit” for a tiny fee, leave a 200 page powerpoint (with black pages just to fuck your printer up). The company struggles on for a few years and is saved at the last minute by a buy out by a company at an early stage of the cycle who slowly port all the customers and buggy shit to their product platform. Then the team either dissolve and knowledge is lost or they take a cash sum from the sale and start up some ball of shit company that does the same again.

That’s enterprise 101 because the people that have been hit by the clue sticks know better than to subject themselves to this and do work in SF and SV and London. Me: I’m a masochistic crazy person who wonders every day why I don’t just go and write web sites for half the cash or flip burgers because it’s less painful.

Now you understand how IT is driving economic growth.