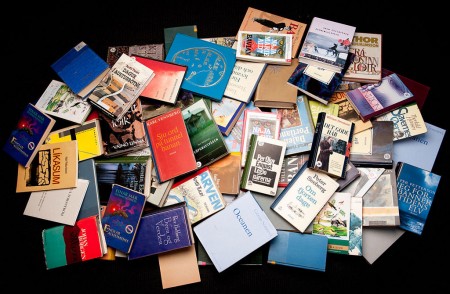 Most published books sell few copies.  According to BookScan data:

In 2004, BookScan covered about 70% of all U.S. book sales.[2]  The book industry today, like other industries marketing symbolic works, is based on hugely popular blockbusters.  Most authors, even authors of published books, earn nothing for all their work.

Books that sell less than 100 copies are not a waste.  An author may have enjoyed writing a book.  A few readers may value the book greatly. Of course, authors, like everyone else, need some way to support themselves.  A book that sells less than 100 copies is not likely in itself to provide significant financial benefit to the author.  A reasonable strategy for such books is to make them freely available to everyone on the Internet.  On the Internet, such books potentially can remain economically accessible to billions of persons forever.  Together they can greatly enrich the public landscape of human creativity and knowledge.

[image] pile of Nordic books.  Thanks to Johannes Jansson and Wikipedia.