The social environment is highly relevant to the evolution of human communication capabilities. Human communication evolved through primates living in groups.  Living in groups creates opportunities for synchronized physiological states, cooperative predator defense, coordinated food acquisition, diffusion and inheritance of behavioral innovations, and exchange of goods such as food, sexual activity, and grooming.  Living in groups also creates opportunities for individual and coalitional action to shift the distribution of food, mating, and physical risks among group members.[1]  Communication capabilities have evolutionary significance both for cooperation and competition within social groups. 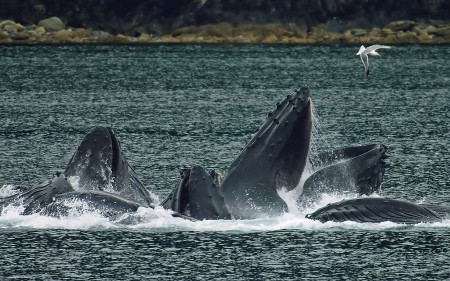 Relative to other animals, humans have greater social complexity and engage in more complex communication.  Consider, for comparison, humpback whales.  Humpback whales work together in role-differentiated teams to feed upon schools of fish.[2]  Male humpback whales also engage in behaviorally elaborate mating competition that includes complex vocalizations (songs).[3]  The coding bandwidth required to communicate a male humpback whale song, however, is roughly fifty times less than the coding bandwidth required to communicate spoken English.[4]  Many organisms are social and communicate with each other in a variety of forms.  Humans form intricate social groups and communicate with each other vocally at a much higher coding complexity per unit time than do other animals.

[2] Such behavior is called bubble-net fishing.

[4] Humpback whales on the Hawaiian breeding ground communicate in song at 0.6 bits/unit, with 2.5 seconds/unit, giving 0.24 bits/second. Suzuki (2006) pp. 1860, 1862. Australian humpback whales migrating away from their breeding ground had coding bandwidth about a third less than the Hawaiian whales.  Miksis-Olds et al. (2008) p. 2391.  I calculate the bandwidth of spoken English as 69 bits/second, based on 1 bit/letter, 5 letters/word, and 200 words per minute.  These figures should be understood as rough approximations.

[image] 15 humpback whales bubble-net fishing off the coast of Alaska on 18 August 2007.  Thanks to Evadb and Wikipedia.