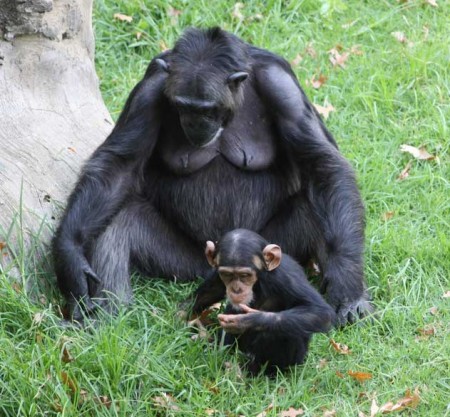 She was born at the Yerkes Research Center of Emory University and raised by her mother, Sonia, who was born in Africa. Sonia, a gentle and extremely competent adult female, had been a good mother to Barbara.[1]

Nonetheless, Barbara herself was initially a complete failure as a mother:

when Barbara gave birth to her first infant, everyone expected that she would exhibit competent maternal skills, because Barbara was mother-reared, housed with other adult chimpanzees (an indication that she has good social skills), and she exhibited sufficiently sophisticated sexual behavior to become pregnant through natural means.  When Winston was born, however, Barbara attentively leaned over him but did not pick him up.  Barbara gave every indication of the best intentions toward her baby: She was disturbed by his crying and made herself available to him; she hovered close to him, and leaned more solicitously whenever he cried.  Barbara, however, had no maternal behaviors; she did not pick him up and did not cradle him.  After a few hours, Winston was placed in the nursery because he would not have survived if his mother did not pick him up.  Because Barbara was so solicitous but lacking in behavior, it was concluded that she did not know what to do with a baby.[2]

Conan, a 1-year-old chimpanzee infant, was temporarily moved to the great ape nursery at this time so that his mother would resume her menstrual cycle.  The veterinary staff at the Yerkes Center decided to introduce Conan to Barbara.  Barbara was as solicitous as she had been toward Winston, her biological offspring, but Conan, a more capable 1-year-old, initially avoided Barbara.  Finally after 2 to 3 days, Conan rushed into Barbara’s arms and accepted her as a mother substitute.  In the next 3 to 5 months, Barbara was observed cradling Conan, allowing him to nurse, and gathering him up before she moved. Because the experience was good for Barbara and Conan was receiving good care, Conan was allowed to remain with Barbara, his adopted mother, rather than disrupt him again with a return to his biological mother.  Three years later, Barbara gave birth to her second baby, Kevin, and exhibited the full range of appropriate species-typical maternal behaviors.[3]

Conan apparently recognized that Barbara was a female and behaved in a way dependent upon this recognition.  Barbara undoubtedly had hormonal mechanisms of mother-infant communication typical for female mammals.  At the same time, multi-sensory boot-strapped communication with Conan controlled Barbara’s maternal behavior in developmental time.

The unconditionally, naturally nurturing primate mother is a myth.  Maternal abuse of infants occurs among primates in the wild.[4]  It also occurs among primates in controlled environments.  Among the thirty female chimpanzees who gave birth at a primate research center from 1987 to 1992, eighteen did not provide sufficiently good maternal care to assure their infants well-being past three months of age.  Some of the chimpanzee mothers appeared to be frightened of their infants and never held them.[5]  Maternal competence in chimpanzees seems to depend on female chimpanzees having, as juveniles or adolescents, direct, hands-on experience with infants.[6]  Perhaps playing with dolls has some of the same effects.

Don’t forbid your daughters from playing with dolls.  That’s totalitarian and stupid.

[4] Maestripieri (2000), p. 895, credits Hrdy (1999) with “the creation of a new myth, that of the unconditionally nurturing primate mother.”  Id. has also contributed to the social construction of belief in male dominance.  For a discussion of a case of a chimpanzee mother who in the wild abandoned her 5-year-old son, see Hiraiwa-Hasegawa & Hasegawa (1988).

[image] Chimpanzee mother with baby.  Thanks to Derek Keats for sharing his photo.

Hiraiwa-Hasegawa, Mariko and Toskikazu Hasegawa. 1988. “A case of offspring desertion by a female chimpanzee and the behavioral changes of the abandoned offspring.” Primates 29(3): 319-330.