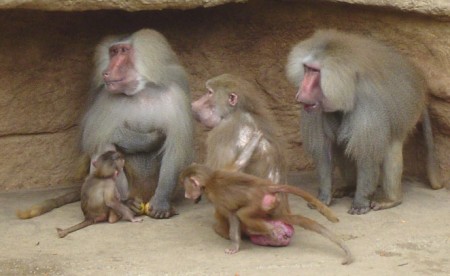 Sexually asymmetric parent-offspring body contact is plausibly coupled with sexual comparative advantage in communication.  One organism being alive inside another’s body facilitates relatively low-cost communication between the two.  Almost all mammals develop through internal gestation where the bloodstreams of the mother and nascent child connect through the placenta.  The states of the mother and nascent child interact extensively to produce major changes in both.  Actions within this relationship have enduring communicative effects:

The fetus not only learns the speech characteristics of the mother prenatally, but shortly after birth, infants prefer their mother’s voice, a passage recited to them prenatally, and the theme music of a soap opera watched by their mothers during pregnancy. The ability to detect other sensory stimuli, such as tastes and smells, also seems to be developed before birth.[1]

In several animal species, including humans, the foods that the mother eats while pregnant affect offspring’s food preferences.[2]  More generally, in the bodily configuration of internal gestation, communication between the nascent child and the mother determines the balance of maternal bodily resources directed to the nascent child, including whether the mother’s body aborts it.[3]

Communication with a nascent child is closely related to evolutionarily ancient forms of communication.  In most mammals, the fetal placenta produces and regulates hormones that induce maternal care.  When a child is born, communication between the child and the mother shifts from hormonal flows through the placenta to other sensory modes:

A baby rat, for instance, born with its eyes closed and hairless, looks much like a small pink peanut shell …. It needs warmth and nurture.  If separated from mother, the rat pup starts emitting ultrasonic calls, the same as its adult cousins, the bats. … The longer it is isolated from mother’s warm, thick fur, the more the rat pup’s temperature falls, and the faster its calls come to a crescendo.  A nursing dam will respond immediately to these calls and within less than three minutes will round up all her pups, nudge or carry them to a wood-chip pile she has created in the corner of the cage, and then couch over them and nurse.[4]

Sound and touch cause hormonal changes in mother and baby similarly to communication through the placenta:

maternal care may be considered an extension of physiological homeostasis. … Maintenance of maternal care is dependent on the presence of neonates and is synchronized with their post-natal development.  Nest building stops on the day when pups can regulate their body temperature and milk production terminates when the pups decrease their suckling times, events that are related to the mother leaving the nest more frequently to prevent overheating. … Most altricial mammals produce large litters and fail to distinguish between individual offspring.  Indeed, the removal of individuals {neonates} produces no signs of behavioral loss, and even removing the whole litter results in the female returning to oestrus within a few days, following which mating and a further pregnancy rapidly ensue.[5]

Some animals have evolved a relatively large neocortex.  The neocortex supports more flexible and complex communication between parents and offspring.  At the same time, evolution has conserved widely across mammals mechanisms of maternal hormonal coupling.[6]

Birds have relatively sexually symmetric parental relations to offspring and relatively symmetric cross-modal communication.  Most bird species are socially monogamous.  Male birds often help to feed young and incubate eggs.  Males, however, predominate among birds that sing.  Male courtship and male territory defense are traditional explanations for bird song.  Careful observation of birds, however, shows that female birds’ visual response to songs is crucial for males’ development and execution of songs.  Male singing has its roots “in social encounters occurring many months prior to the breeding season”; it arises from “thousands of cross-modal interactions throughout the year.”[7]  Sexual asymmetry in bird singing contrasts with sexual symmetry in cross-modal bird communication.  The relative symmetry in male and female birds’ relations to their offspring predicts the more difficult to perceive cross-modal symmetry in male and female birds’ communication.

Compared to birds, mammals have more sexually asymmetric parent-offspring body contact.  Female mammals have extensive bodily relations with their offspring through internal placental gestation and post-birth lactation.  Raising newly born mammals to reproductive age typically requires considerable parental care.  Males could help to provide to provide that care.  However, in about 95% of mammalian species, females alone provide parental care.  In those 95% of mammalian species, males provide no services directly to their offspring.[8]  Females’ more extensive bodily relations with offspring may give females a communicative comparative advantage in feeding, comforting, teaching, and protecting young.  Lack of male ability to identify genetic offspring may disfavor male parental care in mammals less than does comparatively poor male capability to communicate with offspring.[9]

[3] Spontaneous abortions and miscarriages are quite common and are often associated with chromosomal abnormalities in the nascent child.  They occur even in circumstances of a woman’s true and conscious willingness to accept and love a child that has much different capabilities and needs than do most children.

[7] West, King & Goldstein (2004) pp. 377, 379.  These observations are specifically of brown-headed cowbirds.  They are brood parasites. Since neither males nor females in brood parasites provide parental care, relations with offspring are probably highly symmetric.  As noted above, birds in general have relatively symmetric male and female relations to offspring.

Long gestation increases the benefits of mate desertion for males.  And because only females lactate, males have relatively less to contribute to rearing the young.  Hence, it is not surprising that male mammals rarely assist their mates in caring for their young: Direct infant care by males occurs in fewer than 5 percent of all mammalian species.

That isn’t convincing analysis.  Mate desertion isn’t necessary for males not to assist in caring for young.  Given that females lactate, males could still make significant contributions to feeding, comforting, teaching, and protecting young.  That males in most mammalian species don’t is surprising.  In humans, enormous anti-men discrimination in child custody awards contributes to and supports relatively little contact between men and children.

[9] Even in multi-male primate societies in which females regularly mate with multiple males, evidence indicates that, using a variety of cues, primate males have some ability to identify their offspring. Buchan et al. (2003).

[10] Paternity laws force men also to make large financial transfers to mothers who aren’t mothers of their children.  Gynocentrism, rooted in female advantages in contact with offspring and in social communication, supports those laws.

[11] Perhaps 5% of children in high-income democracies believe their biological fathers to be men who in fact aren’t their biological fathers.  Western gorillas typically live in single-male/multi-female groups.  Relative to human social life, gorilla social life favors paternity knowledge.  DNA tests of 20 offspring in eight western gorilla groups never excluded the resident silverback (adult male) as father.  The tests excluded all other males with high probably for 10 of the offspring.  Among the 10 other offspring were four juveniles.  Juveniles are more likely to have been conceived when a different silverback was resident.  In addition, the DNA tests for these 10 juveniles were less complete than for the 10 that indicated that the resident silverback was the sole probable father. Bradley et al. (2004) pp. 510-1.

Broad, Kevin D., James P. Curley and Eric B. Keverne. 2006. “Mother-infant bonding and the evolution of mammalian social relationships.” Philosophical Transactions of the Royal Society B 361: 2199-2214.