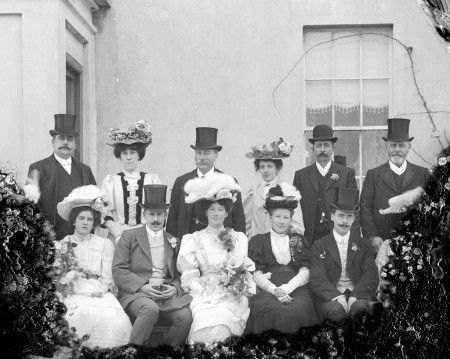 Virilocality and polygyny probably have been common features of human groups across evolutionary time.  Virilocality means heterosexual mates tend to establish a home near the man’s kin.  Uxorilocality is the corresponding term for locating near the woman’s kin.  Polygyny means one man tends to have concurrently either no or multiple heterosexual mates.  Polyandry is the corresponding term for women.  Among about 330 societies that European anthropologists have described at early dates of European contact, 70% were virilocal, 10% bilocal, and 20% uxorilocal.  About 80% practiced polygyny to some extent.[1]  Among societies classified as foragers, residence patterns have been summarized as flexible.[2]  The independence and representativeness, over an evolutionarily relevant time scale, of the data points underlying these statistics are highly problematic.[3] The expansion of agricultural societies has strongly affected the distribution and ecology of hunter-gatherer societies and plausibly their residence arrangements as well.[4] More sophisticated phylogenetic comparative analysis indicates that Proto-Indo-European social organization was virilocal and Proto-Malayo-Polynesian, uxorilocal.  Virilocality appears to be more stable than is uxorilocality.[5]

The Middle Old World includes North and Northeast Africa, the Middle East, South and Central Asia, most of China, and the Vietnamese. … for most of history the economic center of Eurasia was in this region. … The Middle Old World has a combination of two kinds of constraints – it is constrained both to being unilineal and to being patricentric.

The ecology of the Middle Old World favored competition for assets – domesticated animals, pasture land, and other capital and land associated with capital-intensive agriculture.  Probably driven by the interests of dominant, asset-rich men, social life in the Middle Old World strongly limited men’s and women’s freedom of association and freedom of sexual interaction:

the Middle Old World shows a strong tendency for women to be restricted from public roles, with little political or economic autonomy. Purdah, veiling of women, foot-binding, infibulation, the suttee, and the honor-shame complex, all originated within the Middle Old World.

The Middle Old World also was the locus of significant developments in human communication:

[1] Based on data and coding for Murdock’s Ethnographic Atlas, as reported in Burton et al. (1996), Table 1.  Number of societies: 311 coded for marital residence, 348 coded for mating (marriage) type.  The societies are almost exclusively non-European societies that European-oriented anthropologists described at early dates of European contact.

[3] Marlowe (2004) uses the Standard Cross-Cultural Sample (SCCS), which he describes as “186 societies with good ethnographic coverage that have been chosen to create an unbiased sample of the world’s societies with respect to geographic region, language family, and cultural area.”  However, the definition of society is highly problematic and not external to the SCCS.  In addition, geographic region, language family, and cultural area do not together define a consistent, well-defined sampling frame that would make the statistical concept of “unbiased sample” meaningful.  Id. p. 278,  ft. 4, notes:

North America is overrepresented among foragers (83% in the EA {Ethnographic Atlas}, 50% in the SCCS {Standard Cross-Cultural Sample}) because there were many foragers there when ethnographies were first written, while the Circum-Mediterranean region is completely absent because foragers had disappeared there before ethnographies were written.

Even in geographic regions where foraging societies exist, the advance of agricultural societies has strongly affected the distribution of foraging societies.  Alvarez (2004) analyzes fifty hunter-gathering societies selected from the Ethnographic Atlas.  The relevance of this sample to general patterns of human social organization is unclear.

[4] For example, starting from about 4000 years ago, Bantu farmers from southern Cameroon spread across sub-equatorial Africa and displaced foragers living in locations propitious for agriculture.  Wood et al. (2005).  The social organization of ethnographically described hunter-gather societies may not be more evolutionarily relevant than the social organization of non-human great apes, or the social organization of ethnographically described humans in non-hunter-gatherer societies.  Given human-Neandertal interbreeding, dispersed development of agriculture prior to 11,000 years ago, and relatively rapid genetic evolution, significant human evolution may have occurred in social circumstances different from those of current (marginalized) human foraging societies.

[image] wedding of Miss Watts of Bonmahon, Co. Waterford, Ireland, on 29 Apr. 1907 at Watts family home.  From original glass plate negative. Thanks to National Library of Ireland and flickr Commons.

Fortunato Laura, and Fiona Jordan. 2010. “Your place or mine? A phylogenetic comparative analysis of marital residence in Indo-European and Austronesian societies.” Philosophical Transactions of the Royal Society of London. Series B, Biological Sciences. 365 (1559): 3913-22.