Decameron X.8, the story of Tito and Gisippo, has an unusual setting. While most of the Decameron’s tales are set within two generations before the catastrophic plague of 1348, the tale of Tito and Gisippo begins and ends in Rome between 43 BGC and 30 BGC. That was the period of the Second Triumvirate. The Lex Titia of 43 BGC formally declared the constitution of the Roman Republic to be restored. In actual effect, the Lex Titia set the road to the establishment of the Roman Empire in 30 BGC. The story of Tito and Gisippo similarly reveals, under Athenian formal ideals of civic friendship, narrow interests and dominating power shaping friendship and political relations.[1] 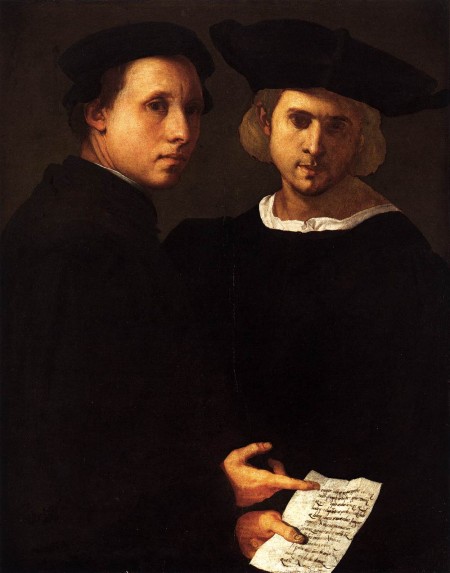 Ideals of friendship occur prominently earlier in Decameron VIII.8. In that story, Spinelloccio and Zeppa are young men and next-door neighbors with common status:

they spent a great deal of time in one another’s company, and to all appearances, they loved one another as if they had been brothers, or even more. [1]

Despite their mutual affection, Spinelloccio began sleeping with Zeppa’s wife. Zeppa eventually discovered their affair. To avenge that betrayal, Zeppa arranged to have sex with Spinelloccio’s wife on top of a chest. Moreover, Spinelloccio had been locked in that chest while seeking to avoid detection in an amorous visit to Zeppa’s wife.  Hearing and feeling his wife and his friend’s dance of sexual action just above him, Spinelloccio:

recalled that he was the one who had given the first offense, that Zeppa was right to have done what he had done, and that he had not only displayed humanity in dealing with him, but had treated him like a true friend. Consequently, he resolved that if Zeppa permitted it, he would be a better friend to him than ever. [2]

Spinelloccio and Zeppa had always shared everything in common. Now they agreed to share also their wives in common. The true friends and their wives lived happily ever after in polyamory. This story of sexual betrayal by a friend, sexual revenge on the friend in return, and the triumph of friendship is a parody of classical ideals of friendship.

The tale of Tito and Gisippo ends like the tale of Spinelloccio and Zeppa. Tito took into his Roman home his Athenian friend Gisippo. He made Gisippo “joint owner of all his wealth and possessions.” Moreover, Tito gave Fulvia in marriage to Gisippo. The true friends and their wives lived happily ever after together in the same house. Tito’s wife Sofronia had formerly been Gisippo’s apparent wife. Gisippo’s wife Fulvia was Tito’s “sorella.” That’s an Italian word for sister with a Latin root extending to cousin and female friend. Boccaccio was willing to suggest sexual practice that swerved from authorized acts. The tale of Tito and Gisippo ends with a perverse echo of Spinelloccio and Zeppa’s parody of classical ideals of friendship.[3]

Parody of classical ideals of friendship had political force in Tito’s long speech to the Athenian families of Gisippo and Sofronia. The Athenian Sofronia was the Athenian Gisippo’s intended wife. Because his Roman friend Tito had become lovesick to the brink of death for Sofronia, Gisippo secretly gave her in marriage to him. That action eventually had to be made public. The Athenians denounced Tito’s action. They called for him to be severely punished. After enduring for a time their attacks on his friend, Tito decided to address the problem:

knowing that the Greeks had the habit of making a lot of noise and threats until there was someone to answer them back, at which point they would become not merely humble, but quite abject, he decided their prattle could no longer be tolerated and that he needed to respond to it. [4]

Tito gathered the Athenian families of Gisippo and Sofronia and delivered to them a long speech filled with supra-reasonable rhetorical arguments. Consider Tito’s classical arguments:

Tito finished his speech with his face “completely contorted by the anger he felt.” Taking Gisippo in hand, he immediately left the speaking venue with him. Tito walked out “turning his head from side to side and casting menacing looks all about him.”[5]

The Athenians appreciated Tito’s classical arguments and his power as a Roman:

so they went to find Tito and told him how pleased they were that Sofronia should be his, adding that they were glad to have him as a dear family member and Gisippo as a good friend. Once they were done celebrating both their friendship and their kinship together, they went their separate ways

Philosophers’ in their minds created classical ideals of friendship. They imagined republics founded on those ideals. While the tale of Tito and Giseppo recognized classical ideals of friendship, it parodied them. The tale of Tito and Giseppo points to the underlying reality of narrow interests (sexual desire)  and dominating power (Rome relative to Athens). For Boccaccio, friendship, like love, is about flesh-and-blood human life.

[1] Sorieri (1937) traces Boccaccio’s sources for this story in Italian, French, English, and Spanish literature. Two sources in Latin literature are Lantfrid and Cobbo (about the 10th century), Cambridge Songs 6; and the Perfect Friend in Petrus Alfonsi’s Disciplina Clericalis (beginning of the 12th century).  The latter clearly has roots in Arabic literature. Apparently from Disciplina Clericalis, the story of the half-friend and the perfect friend were adapted into Spanish literature in El Libro del Cavallero Zifar (The Book of the Knight Zifar) 5-6, written in 1300 or a few years later, from Spanish trans. Nelson (1983) pp. 12-20. The stream in Arabic literature that produced the Tale of Attaf probably also produced the Perfect Friend in Disciplina Clericalis and contributed to Tito and Gisippo. In the Tale of Attaf, Baghdad is dominant over Damascus. In the Perfect Friend, Baghdad is dominant over Egypt.

[1] Giovanni Boccaccio, Decameron, Day 8, Story 8, from Italian trans. Rebhorn (2013) pp. 665-6.  The appended clause “or even more” suggests a connection to Ja’far and Attaf’s relationship in the Tale of Attaf.

[2] Id. p. 659. In the quote above, “true friend” is my replacement for “friend” in Rebhorn’s translation. The Italian source has “compagno” and “amico” for the first and second instances of friend. In Boccaccio’s context, the first instance of friend is an amplification of friendship relative to the second instance.  Musa & Bondanella (1982) translated the first instance as “true friend.” I’ve used that phrase above.

[3] Earlier in the story in discussing what to do about Tito’s lovesickness for Gisippo’s intended wife Sofronia, Gisippo said to Tito:

I can’t remember ever having anything what wasn’t as much yours as it was mine. And so, even if things had advanced to the point where there was no other possible course of action, I’d still be willing to do with her {Sofronia} what I’ve done with everything I possessed in the past, but as the matter stands at present, I can ensure that she’ll be yours alone.

[4] Id. pp. 809-10. Subsequent quotes are from id. pp. 810-15. The Italian text uses the names Tito, Gisippo, and Sofronia. Rebhorn translated the names to the Latin forms Titus, Gisippus, and Sophronia. I’ve used the Italian name forms in the quotations above.

[5] A very knowledgeable scholar of Boccaccio has written of the tale of Tito and Gisippo:

More than anything else, what makes the dominance of reason evident in this tale is the predominance of logical discourse, particularly Tito’s apologia, a tour-de-force of epideictic oratory. … Friends, orators, and Stoic philosophers, they {Tito and Gisippo} come as close to being Christian as conceivably possible, by nation, epoch, and ethics. Emblems of Hellenic and Latin civilization at its finest moment, they are a fitting pair for the closing sequence in the Decameron’s magnificent finale.

Kirkham (1986) pp. 230-1. Boccaccio probably would enjoy a hearty laugh at that panegyric. Another scholar perceived “a certain ambivalence with regards to ideal friendship in the tale.” She wrote:

If ideal friendship is defined by the Golden Rule (“Do unto others”), mutual goodwill, reciprocal love and the sharing of both grief and good fortune, perhaps the young men’s friendship is not so perfect after all.

Kirkham, Victoria. 1986. “The Classic Bond of Friendship in Boccaccio’s Tito and Gisippo (Decameron 10.8).” Pp. 223-235 in Aldo S. Bernardo and Saul Levin, eds. 1990. The Classics in the Middle Ages. Papers of the Twentieth Annual Conference of the Center for Medieval & Early Renaissance Studies. Binghamton, NY.