Read literally, the preface to the Decameron indicates that it was written for ladies.  Boccaccio and a lady reader of Decameron IX.10 are laughing still at today’s learned literary scholars’ will to believe that fiction. 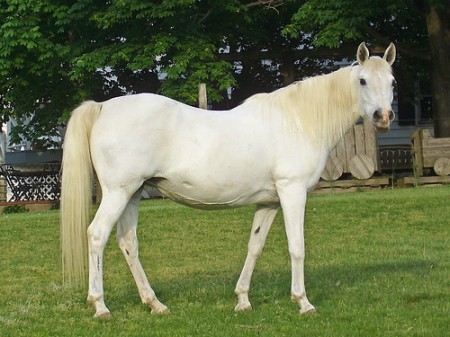 In Decameron IX.10, Donno Gianni, a priest serving an impoverished church, garnered a living by trading at fares.  Donno Gianni became friends with a fellow trader named Pietro.  Pietro lived in a poor little cottage and had only one ass.  When Donno Gianni visited, he had to sleep in the stable on straw next to his mare and Pietro’s ass.  Pietro’s wife Gemmata offered to sleep at a neighbor’s so that Donno Gianni could have her place in bed with Pietro.  Donno Gianni declined that offer.  He told Gemmata:

don’t trouble yourself about me.  I’m doing just fine, because whenever I like, I change this mare into a beautiful gal and pass the time with her.  Then, whenever I want to, I turn her into a mare again. [1]

While a priest, Donno Gianni evidently was also a man with keen heterosexual animal instinct.

Pietro pleaded with Donno Gianni to fulfill his wife’s rich plot.  Donno Gianni tried to decline, but Pietro insisted.  Finally, Donno Gianni agreed to perform his magic in their cottage just before daybreak.  He explained that if they wanted his performance to succeed, they had to obey his every order and not say a single word, no matter what.  They eagerly agreed.

To perform his magic in their cottage just before daybreak, Donno Gianni ordered Gemmata to take off all her clothes and get on her hands and knees in the position of a mare.  Then Donno Gianni began touching her and invoking a bodily transformation:

Just as for the monk Rustico and the young girl Alibech, events led to a rising of the flesh:

When he came to her breasts, he found they were so firm and round that a certain uninvited something or other awoke and stood erect, and he said: “And let this be a fine mare’s chest.”

He then did the same thing to her back, her stomach, her hindquarters, her thighs, and her legs.  Finally, having nothing left to take care of but the tail, he whipped up his shirt, grabbed hold of the stick he used for planting men, and quickly stuck it into the furrow that was designed for it, saying: “And let this be a fine mare’s tail.”

Pietro then interrupted, saying he didn’t want a tail there.  After the “vital fluids that all plants need to take root” had come, Donno Gianni pulled out of his magic performance.  He declared that Pietro’s words had broken the spell.  Pietro explained his interruption:

“I didn’t want that tail there, no, not me.  Why didn’t you tell me, ‘Do it yourself’?  And besides, you were sticking it on too low.”

“I didn’t tell you because it was your first time,” replied Donno Gianni, “and you wouldn’t have known how to stick it on as well as I do.”

Pietro apparently preferred putting the tail on the mare in the ass position.  Gemmata turned on Pietro, called him a dope, and blamed him for ruining their chance to earn more money.  Pietro was left to continue doing his work only with the anus and the ass.

Dioneo, who understood Ovid’s teachings on love, told this story.  He first praised the ladies’ superior virtue.  He then summarized the story’s moral teaching:

{this story} will teach you how carefully one must follow the instructions of those who do things by means of incantations and how making even one tiny mistake will ruin everything the magician has done.

The conclusion for Day 9 offers a higher metatextual commentary on this story:

How the company laughed at this story, which the ladies understood better than Dioneo had intended, can be left to the imagination of that lady who has read it and is laughing at it still.

That lady is laughing still at those who read the Decameron without a hearty sense of irony.[3]