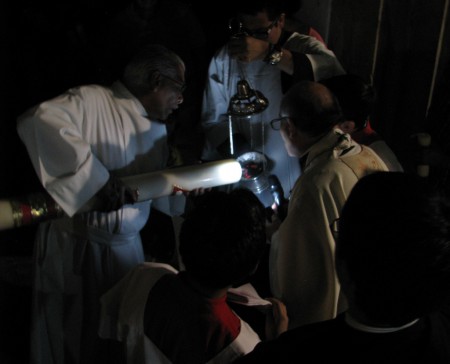 Hatim Tai, an Arabian figure thought to have died about 578 GC, became legendary for his generosity. Here are verses, originally written in Arabic, attributed to him:

When riches are lords for their folk
I, praise to Allah, will enslave riches

When tricky greed quenches its fire
I say to one who wants my fire: Light up!

Spread the little, be enough for us
Its flames create, chaste and praised [1]

In these verses, Hatim Tai ends slavery by enslaving riches, meaning giving his wealth generously. The metaphors of far off greed breaking and tricky greed quenching its fire suggest, at least to me, dawn. The light of day is commonly understood to offer some protection against sly theft.

Hatim Tai subsequently develops an alternate metaphor of sharing fire. Sharing a flame doesn’t diminish it, but spreads light. In ancient Christian liturgy for celebrating the Easter Vigil, the congregation gathers in darkness. Flame from the single Paschal candle is shared to ignite candles that each person holds. Sharing that single flame lights up the church. That same figure is part of Hatim Tai’s verses.

The “thoughts of blame” in the first couplet could mean Hatim Tai’s kin blaming him for squandering their common resources. But thoughts of blame could also come from the receiver of generosity, humiliated with inability to reciprocate appropriately. Being drawn out suggests being expelled or lured from one’s home camp.

In the second couplet, Hatim Tai justifies his generosity. He hopes to receive blessings from God for his generosity. He offers the other party not an obligation to him but clear material rewards: “profit in a bargain.” Barriers to such trade would be God’s absence or humans’ unwillingness to reap profit. In human understanding around the world and throughout history, neither of these barriers to trade have been prevalent.

Being too generous can impede practical cooperation. In his introduction to his volume of Hatim Tai’s poetry, the translator explained:

The success of Hatim’s poetry is in part due to his mastery of communication habits by means of which his readers understand his work and were stimulated to spread his fame long after his death. Such habits are established in early childhood and can be thought of as developing in a five part sequence. The tactile sequence begins with the horizontal position which the infant maintains during the first few weeks after birth. The second position is established as it learns to sit up, the third position appears when it learns to crawl on all fours, the fourth position involves learning to stand on two legs, and the fifth and final position is walking on two feet.

These five positions are related to certain auditory and visual habits. The horizontal position can be correlated with the infant’s ability to babble as it tries to cope with its separation from the mother’s continuous feeding at birth. The seated position lets the child deal with the pull of gravity as it is exerted along the vertical torso instead of as in the horizontal position. The result is a new kind of breathing that produces articulate sounds which replace the babbling. The crawling position acquaints the child with locomotion on its own power and allows it to explore the world with its four feet. This results in the grouping of sounds into words with a syntax that classifies them as nouns and as verbs, etc. and a semantics that relates words to events in an external world. The standing position teaches the child to use its hands to grasp objects such as the pen by means of which elements of a script can be made to represent the sounds of words. The walking position in the last fifth gives the child new ideas that alter the spoken syntax and semantics so that their grammar and metaphors become more elaborate than in spoken language. [3]

For the couplet above, “If what he gives freely…,” the translator provided the following commentary:

The first couplet says that Hatim gives so lavishly that he is blamed for it. The {Arabic} verb amsakat has a feminine singular ending and its subject janabatu though plural also has a feminine ending in the singular. This suggests that blame for Hatim’s good deeds originates in women and they in turn are the reason he is spurred on to do more good deeds. This is put in the form of a supposition since the women referred to are the prenatal mother, the nurse, and the feminine torso of the seated infant, all of whom cannot be identified too clearly since they are known before speech develops. But the desire to give waste products to those who have stolen the continuous nourishment is clear enough. [4]

Engaging with such communications theory and such poetic commentary is difficult. But that theory and commentary is no more nonsensical than hugely influential Freudian and other theories and commentaries. Finding some constraint on humans’ generosity in giving meaning seems particularly necessary in a global economy of complex, intricately connected, quickly signaling human communication networks.

This for that has great use when it means no more than that.

[1] Diwan of Hatim Tai, from Arabic trans. Wormhoudt (1984) 4:12-17. A leading authority on Arabic literature has told me that Wormhoudt’s translations poorly represent the Arabic text and have numerous clear translating errors. The name Hatim Tai has numerous spelling variations, including Hatim al-Tai and Ḥātem-e Ṭāʾi. Stories of Hatim Tai have parallels in the Old French fabliau William of the Falcon, in the medieval Latin poem Lantfrid and Cobbo, in Boccacio’s Decameron X.3, the story of Nathan and Mithridanes, as well as in much other literature around the world.

[4] The commentary faces the Arabic poetic text and is immediately below its English translation.