Recently I ate a cantalope and threw the rind into the trash bin, which remained unemptied longer than it should have been. I also had on the counter some peaches ripening past ripened. Attracted by this resource-rich environment, fruit flies invaded my kitchen.

Generally speaking, I’m a live-and-let-live kind of guy. As a kid I always argued for not cutting the grass. I believe that most household mold is actually a beneficial antibiotic. I favor spiders over insecticide.

But having swarms of fruit flies in the kitchen is gross.

I decided to take back the kitchen. Unlike Insectopia, this game was for real.

I threw out the peaches and emptied the trash. I then took up my nearly unused bottle of Lysol All Purpose Household Cleaner and gunned down a division of fruit flies that were occupying the area around my kitchen window. 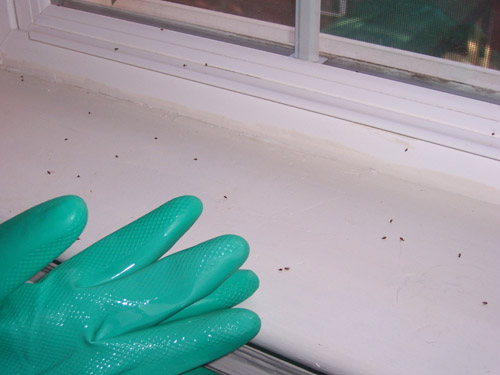 But chemical warfare of any sort is neither civilized, sporting, nor manly. I decided take the rest out using my own hands. I tore off a paper towel and started going after them.

This was more interesting than any first-person shooter game I had ever played. I wasn’t just a matter of quick thumbs. You have to move your whole hand quickly. And, instead of just scanning a screen in front of you, you have to scan 360 degrees around the whole kitchen. While games now push a huge number of polygons to create realistic surfaces and textures, there’s nothing as real as kitchen walls, cabinets, a refrigerator, and counters. The surface matters a lot. On a curved surface of a cabinet, it’s much more difficult to trap the fruit fly when it jumps in response to an attack.

The paper towel recorded my score. But not totally, because sometimes the crushed fruit fly would stick to the wall, or fall to the ground. 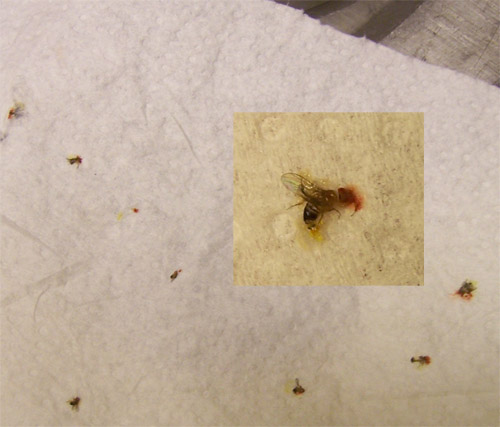 Fruit flies are bred in biology labs around the world. They are relatively simple organisms. More is probably known about fruit flies than about any other living organism. But I don’t think anyone yet knows how to make such an exquisite little flying machine.

Looking over the paper towel, I realized that, when crushed, fruit flies bleed. I killed them quickly, and did not intentionally try to cause them suffering. I believe that it is morally permissible for me to kill common flies in my kitchen. But is it wrong for me to make a game out of killing flies in my kitchen? I don’t think so, but the queston troubles me a little. Maybe that shows the power of connecting games to the real world.

5 thoughts on “a first-person shooter game”