One of the leading monuments to twentieth-century bureaucracy is Tatlin’s Tower. Planned about 1919, the Tower was to be constructed from iron, glass, and steel:

The tower’s main form was a twin helix which spiraled up to 400 m in height [about a third taller than the Eiffel Tower], which visitors would be transported around with the aid of various mechanical devices. The main framework would contain three enormous rotating geometric structures. At the base of the structure was a cube which was designed as a venue for lectures, conferences and congress meetings, and would complete a rotation in the span of one year. In the centre of the structure was a cone, housing executive activities and completing a rotation once a month. The topmost one, a cylinder, was to house an information centre, issuing news bulletins and manifestos via telegraph, radio and loudspeaker, and would complete a rotation once a day. There were also plans to install a gigantic open-air screen on the cylinder, and a further projector which would be able to cast messages across the clouds on any overcast day. [Wikipedia]

The three geometric structures within the main frame were to have glass-window surfaces, symbolizing transparent government. The Tower was meant to be the headquarters for the Third International (Comintern). It is a pioneering work of constructivism, whose influence can be perceived in a twenty-first century constructionism initiative. The Tower was never built. 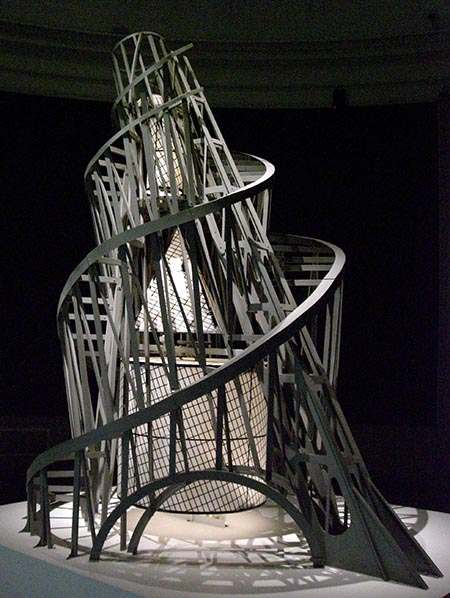 Or at least most people believe that the Tower was never built. Perceptive thinkers and artists have started to challenge that belief:

This month’s Carnival of the Bureaucrats brings you an exclusive revelation: Tatlin’s Tower exists. It’s bureaucracy.

if the Tower was designed to be of the people, a monument to international popular sovereignty, then it is also in the people, and amongst them, literally: it is medically present in the space between cells, resonating in cobwebs of bone marrow, as much as it is traced again and again within the four dimensions of urban space by the passage of workday pedestrians.

It’s not about intellectual enlightenment or industrial progress, even if you perceive that floating in the Albert Dock in Liverpool. The Tower is biological. The Tower is bureaucracy.

Atlantic Salmon at Save the Ribble reports that the Preston City Council is not being transparent about plans for river work, including barrage, on the Ribble. In Preston and elsewhere, the Ribble powered early-nineteenth-century cotton mills that helped to give birth to the Industrial Revolution. A decent respect for bureaucracy and history demands clear notice and public discussion of development plans.

Marc Andreessen at blog.pmarca.com sets out the Moby Dick theory of big companies. He explains:

The behavior of any big company is largely inexplicable when viewed from the outside.

These statements are based on first-hand observations. However, they aren’t consistent with the design of Tatlin’s Tower. Mr. Andreessen, please reconsider your observations.

TeleBusillis declares that OFCOM is spiraling out of control. He reports a “growing trend of industry dissent at the UK Communications regulator and [industry participants] basically ignoring its judgements.” That’s terrible. Perhaps an OFCOM public-service publishing (PSP) initiative can help to increase awareness of the importance of communications regulation.

Tony Blair in a post from 10 Downing Street discussed “Our Nation’s Future — Public Life.” Mr. Blair observes that the media is facing a “hugely more intense form of competition than anything they have ever experienced before”:

The result is a media that increasingly and to a dangerous degree is driven by “impact”. Impact is what matters. It is all that can distinguish, can rise above the clamour, can get noticed. Impact gives competitive edge. … It is this necessary devotion to impact that is unravelling standards, driving them down, making the diversity of the media not the strength it should be but an impulsion towards sensation above all else.

Bureaucrats could offer the media training on how not to focus on impact. Here at the Carnival of the Bureaucrats, we refuse to compete. We simply do our job with the utmost professionalism and pay no attention to impact whatsoever.

TherapyDoc at Everyone Needs Therapy recounts an outstanding accomplishment from teaching high-school psychology for two years. In order not to ruin the story, we won’t report details. But we found the story personally inspiring. Bureaucrats around the world should read this story and consider the possibility of similar success in their own work. A procedural point: TherapyDoc’s submission included the remark, “You don’t always have to go by the rules, you know.” On our own motion, the Carnival of the Bureaucrats reaffirms the importance of going by the rules. A Carnival of the Bureaucrats’ submission that does not satisfy the rules will be rejected, unless we find a good reason not to reject it.

Jack Yoest at Reasoned Audacity presents “Lurita Alexis Doan: Good Management Meets Bad Politics.” Politicians’ lack of appreciation for bureaucrats’ work has a long and illustrious history. In thirteenth-century France, King Louis IX would administer justice under an oak in the woods of Vincennes. An important work has documented:

“Often in the summer [King Louis IX] went after Mass to the woods of Vincennes and sat down with his back against an oak tree, and made us sit all around him. Everyone who had an affair to settle could come and speak to him without the interference of any usher or other official. The King would speak himself and ask, ‘Is there any one here who has a case to settle?'” As an insightful scholar has pointed out, “ushers had good honest work to do.” Ushers prevented “silly people from presenting sillier petitions to the king.” More generally, screening, processing, and prioritizing requests is important bureaucratic work. In sitting down informally with his back against the oak and dispensing with bureaucracy, Louis was not efficiently administering justice.

Richard Posner at the Becker-Posner Blog discusses intelligence and leadership. He observes, in text appropriately edited in accordance with common journalist practice:

Knowledge in government resides in civil servants…. What is required at the top levels of government is not brilliance, but managerial skill, which is a different thing, and includes knowing when to defer to the superior knowledge of a more experienced…subordinate.

While recognizing the importance of editing, the Carnival of the Bureaucrats applauds Mr. Posner’s insightful observations.

Mark Cuban at Blog Maverick discusses “My Colonoscopy.” We do not find any relationship between colonoscopy and bureaucracy.

Sheppard Salter at salterblog reports on a British wine initiative: “Seems the British government is launching an all out effort to get the middle class to stop drinking wine. Their reason? The nanny state knows better.” The health issues associated with drinking wine deserve careful study. Prior to issuing regulations on wine drinking, we recommend forming a special commission of government economists to undertake long-term testing of the effects of drinking wine.

Barbra Sundquist at HomeBusinessWiz submitted a post entitled “How to Make a Screenshot.” We tentatively conclude that this post, and the respondent’s blog, do not appear to satisfy the applicable regulations for the Carnival of the Bureaucrats. The record, however, contains two additional public interest factors which, in the standard, general-purpose legal balancing test, make this submission legal. First, this month the Carnival of the Bureaucrats received a submission which appears to be related to having oral sex on a beach. The respondent’s submission is clearly much more relevant to daily bureaucratic practice than the before-mentioned submission. Second, the respondent has been in business for over forty years. She reports:

My first home-based business was selling Regal greeting cards at the age of eight. Believe it or not, my mother let me go door to door in our rural neighbourhood, entering the living rooms of complete strangers and doing my sales pitch. My favorite item in the gift catalogue was the baked potato gadget – a four-pronged thing that I now realize was basically useless to an experienced cook. But I must have been persuasive (or else they just wanted to get rid of me) because I sold a lot of them.

We applaud this business initiative and hope that others also begin paying income taxes at an early age.

That’s all for this month’s Carnival of the Bureaucrats. Submit your blog article to the next edition using our Carnival submission form. Submissions should conform to the Carnival regulations. Past posts and future hosts can be found on the Carnival index page.