“Once upon a time, the editorial page of the New York Times set the political agenda for the U.S.,” began the old man. That sounds like a highly undemocratic fairy tale in this Age of Digg (AD). Today, Google is offering Australian Federal Election tools, Youtube is running You Choose ’08, Yahoo is mashing up its own efforts, and the political clout of dailyKos appears to be rapidly approaching that of AARP. A significant share of persons appear to be highly interested in discussing politics with other like-minded persons. They now have much greater capability to do that.

The rise of civilizations in ancient China illustrates the importance of communication. The development of enduring social stratification among lineages living in the same location, the organization of lineages into geographical units and large warrior groups, and the development of writing all emerged in ancient China by the Longshan period 5000 to 4000 years ago. Rather than being a result of developments in productive technology and trade, these developments seem to have been products of the emergence of socially recognized, highly valued communications capabilities.[1]

New findings hint that exclusive communication capabilities may also have been important in the rise of cities in northern Mesopotamia. Tell Brak in northeastern Syria, which eventually became the ancient city of Nagar, developed as a city from about 6200 years ago. A high-density central region developed, but so did “clusters of occupied space interspersed with vacant zones.” The total settlement area was nearly twenty times larger than other settlement areas of the time.[3]

The spatial separation between settlement clusters suggests social distance between discrete subcommunities. … At Brak, clustering may have resulted from maintenance of social distance by immigrant groups. Existing social mechanisms may not have been able to sustain increased density in a nucleated form.

The researchers suggest that urbanism at Brak was “at least in part the unintended result of the actions of autonomous and nonhierarchically ranked groups.”[4]

But Tell Brak was more than just a center of trade and industry. Archaeologists found a “unique stone chalice”: “a chalice with a white marble base and black obsidian bowel held together at its seam with bitumen.”[6] An excavation in 1937-38 uncovered what’s called the “Eye Temple”:

The temple, built ca 3500–3300 BCE, was named for the hundreds of small alabaster “eye idol” figurines, which were incorporated into the mortar with which the mudbrick temple was constructed. The building’s surfaces were richly decorated with clay cones, copper panels and gold work, in a style comparable to contemporary temples of Sumer. [Wikipedia]

Tell Brak became a highly stratified ritual center in addition to being a center of trade and industry. While the Eye Temple is dated much later than the growth of the city, it may have had significant but yet undiscovered antecedents.

Like the development of civilization in ancient China, the development of Tell Brak may have depended on widespread interest in gaining access to scarce communication capabilities (persons and technologies). Small groups might hear accounts that a person or persons at Tell Brak could communicate with spirits whom members of the small group themselves could not contact. They might go to Tell Brak to investigate, settling close enough for observation and investigation, but not so close as to create friction in ordinary communication with the strangers living there. 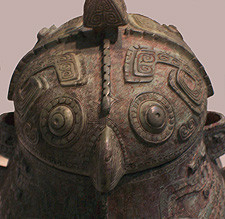 Shared interests and new communications capabilities together seems to have reshaped cities and civilizations. Discussing politics using web-based communications technologies can have a large effect on political authority.