Euripides’ ancient Greek play Ion shows the god Apollo to be violent, immoral, and duplicitous. We moderns don’t imagine gods to be like this. Neither did Ion, a foundling raised within Apollo’s Delphi temple to serve its needs. The Shakespeare Theatre Company’s production of Ion, directed by Ethan McSweeny, brings together family drama, bildungsroman, Broadway musical (think Jesus Christ Superstar), and authentic Greek tragedy to hint at a daring exploration of what is and what will be.

The messenger god Hermes opens the play by putting the audience in the know. Hermes explains that Apollo raped Creusa, the Queen of Athens.  From this union she gave birth to a boy, whom she abandoned. Under Apollo’s orders, Hermes took the abandoned boy to Apollo’s temple at Delphi.  When Creusa and her husband Xuthus come to Delphi many years later, Apollo will mislead Xuthus into believing that the boy, now grown, is Xuthus’ son.  The audience thus immediately learns that the god Apollo rapes.  The god Apollo lies.

This knowledge probably was rather less shocking to the ancient Greek audience than to modern theater-goers. Hermes first words are to introduce himself as the son of Zeus and Maia, the daughter of Atlas. Zeus fought against Atlas and other Titans and punished the defeated Atlas by requiring him to bear on his back the heavens.  One might expect Atlas to burn with anger at Zeus.  How then did Zeus get to lay with Atlas’ daughter Maia?  By his power and force, one might guess.  Hermes shows no moral reaction to the behavior of Zeus and Apollo.  Depicting gods behaving badly didn’t challenge an ancient orthodoxy.  The issue is a matter of modern orthodoxy.

Both Hermes and the goddess Athena, who appears at the play’s end, make spectacularly god-like entrances but modulate their verbal expressions from austere pronouncements to friendly, engaging gossip. Aubrey Deeker as Hermes casually explains his role and playfully addresses the rhetorical question, “Who hasn’t heard of Athens?” to the Washington, D.C. audience. Hermes also conveys knowledge about Apollo, Creusa, and their child through a stark, beautiful, Banraku-style puppet show. Deeker also plays the servant who tries to save Creusa from death for attempting to poison Ion. As the servant, Deeker enters wearing gold shoes and a Nike t-shirt under a white sports-jacket. Linking Hermes to the servant, who is a mortal quite engaged in the drama, seems to me mainly to confuse the audience or perhaps to provoke questions that distract from the movement of the play.

Athena, played by Colleen Delany, sharply moves between different characters. Her gravely delivered opening line, “Don’t be afraid,” is a standard preface to divine revelation in Hebrew and Christian scripture. Athena goes on to explain that Apollo sent her: “He thought it best not to come himself in case it sparked an angry scene relating to events that occurred long ago.”  That line expresses an ex-lover’s fear and excuse.  Delany plays it perfectly in a common style.

The chorus also moves between characters. They enter as Greek tourists displaying stereotypically low-culture American characters.  The chorus, however, are also servants in the greatest house in Athens,  that of Queen Creusa. This positioning of the chorus is essentially true to the Greek text.  The chorus, though servants of Creusa, are depicted in Ion as a volatile female mob.  They sing of their love for children: “Among us mortals what could be merrier / than in each house / marble necked, russet skinned / children … Give me gold and a princely palace / But more, far more — children / How they cheer me.”  They also sing a violent assault on Xuthus and Ion: ” — Weasel! / — Wolf! / Wolfhound! … — So what do we do / if they dare enter our city? / — Kill them!”   Laurels should go to  Rebecca Baxter, Lise Bruneau, Kate Debelack, Laiona Michelle, and Patricia Santomasso for their superb performances as the chorus.

The program for this production highlights “know yourself.”  That phrase is a translation of an inscription on Apollo’s temple at Delphi.  Ion and Creusa seek personal knowledge. Creusa, who has not had a child with her husband King Xuthus, wants to know if she will. She also painfully wants to know what happened to the child she had from Apollo. Ion, who as Apollo’s servant doesn’t even have a proper name, wants to know who his biological parents are (especially his mother), whether she was slave or free, and from where. These quests, however, do not necessarily imply seeking within for a psychological foundation for the self.

The roles of Creusa and Ion show the difficulties of seeking to know yourself as an inner psychological core.  Lisa Harrow as Creusa seems to me to have understandably not understood important parts of Creusa’s behavior. Keith Eric Chappelle as Ion struggles valiantly to motivate the complex actions of Ion.  Across the play, Ion grows to distrust Apollo, but in the end, he completely trust Athena. Ion, although he has lived the sheltered life of a temple servant, quite insightfully anticipates the challenges of his living in Creusa’s household and his participating in Athenian civic life. Ion has in the priestess of the temple an adopted mother who has kept him, cared for him, and loved him.  Yet Ion laments, “I was never breast-fed.”  During the dramatic highlight of Xuthus’s embrace of Ion, Ion repeatedly breaks the movement of the dialogue to express his hunger for his biological mother. From a modern perspective, Creusa and Ion are too much. 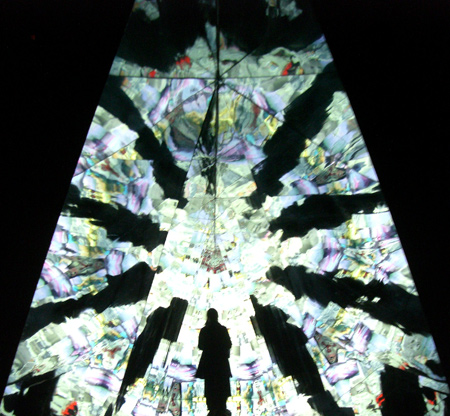 In twenty-first-century Washington, D.C., Ion painfully shows intimate relations that are tragically confused and beset with force, hatred, and lies. Apollo raped Creusa. Yet Ion presents Creusa as desperately seeking and wholeheartedly loving the child resulting from that rape.  According to Creusa, it was only “fear of my father that made me want to kill you.”  From today’s vantage point, Creusa’s love for Ion is an otherworldly, supreme, unbelievable love. This production seems to ignore that obvious problem.

To make the psychological tension worse, this production plays up misandristic aspects of Ion. Creusa, as if from the depths of a self-consuming, love-unknowing heart, misandristically declares: “all men, all are wicked, cruel torturers of women.”  Apparently forgetting her own son Ion, she self-centeredly imagines: “In their eyes we’re all the same.  Good, bad — / they detest us all and make our lives wretched.”  The chorus too, gets in on the act.  In a song that delivers the pleasures of a horror movie, the chorus works itself into a high fury of man-hatred: “He pushes his pup into his wife’s place / Who is he? / Who did this? / Man, man, man, man, man.” With arrows in their clenched hands, the chorus punctuates this last line with violent arrow-thrusts toward Apollo’s inner temple.  Anger toward Apollo is generalized to man and conventionally represented as violence against men.[*]

For a modern audience with some imagination, the play points to a whole world’s confusion.  In a set speech delivered to the audience, Ion declares: “Rape women? Abandon them? Apollo, / was that you?  Father a child, disappear / leaving it to starve or be eaten?”  A rapist violates women through rape, not through abandoning them. Distinguish a totally different type of relation: a man has consensual sex with a woman just for mutual pleasure, with no plans for parenthood.  Imagine this, if you can, and hear Creusa’s words: “You play as you please. / Who pays? We women.” Forget about gods; it’s easy if you try.  Creusa’s words cry out to be interpreted in twenty-first century America.

Today’s state control of male sexuality is an orthodoxy that only Euripides would dare to challenge.  Our age features vast identity-checking databases, DNA testing, strong state fiscal incentives for child-support enforcement, and a large army of child-support enforcement officers.  When a man confronts unplanned parenthood and an unwanted pregnancy, the woman decides if he’ll be a father.  On the basis of no more significant relational connection than having had sex, and on the basis of a women having chosen to carry a pregnancy to the birth of a child, the state will impose large, burdensome monthly financial payments on a man. When it comes to parenthood, men have no choice.  Men now play as they please only if they have no up-to-date knowledge.

High government officials, media leaders, famous artists, and learned scholars repeatedly lie about domestic violence against men, about state control of male sexuality, and about state regulation of fatherhood.  Intimate relations and paternal relations are a crucially important aspects of human life.  If our leaders lie about these issues, or even worse, ignore them, what is the deep structure of society and what is our society’s future?  These are issues that Euripides’ Ion pushes forward to those with imagination for modern adaptions. This production of Ion might have more fully brought a challenge to orthodoxy to present-day  Washington, D.C.

Ion provides a striking counterpoint to the Shakespeare Theatre Company’s recent production of Twelfth Night.  The later leads to modern romance; the former, although it might attempt to point to family romance and even reprise the final choral song, cannot avoid unsettling knowledgeable viewers with tragedy.  Tragedy, especially Greek tragedy, was meant to unsettle the audience. Go see this production of Ion and ponder modern intimate relations and family law.

Ion by Euripides, directed by Ethan McSweeny, playing at the Shakespeare Theatre Company’s Sidney Harmon Hall from March 10 to April, 12, 2009.  The play is based on David Lan’s new version of Ion. All above quotations from Ion are based on Lan’s text.  George Theodoridis’ translation of Ion is freely available on the web.  This review is based on the performance on March 12.

[*] Byzantine scholars’  life of Euripides, composed from ancient biographical material and literary gossip, describes Euripides as a misogynist.  So to does the tenth-century Suda.  Most modern scholars, however, judge Euripides to have given women more than usual dramatic prominence and to have generally portrayed women sympathetically.  At the Windows Discussion of Ion, McSweeny said that he sensed in Euripides a proto-feminist stance.  Misandry in Euripides’ plays seems not to have prompted any notice at any time in history.