The Shahnameh, an epic that Ferdowsi wrote a millennium ago in Iran, describes eternal content business difficulties. In the concluding section, Ferdowsi laments:

Nobles and great men wrote down what I had written without paying me: I watched them from a distance, as if I were a hired servant of theirs.  I had nothing from them but their congratulations; my gall bladder was ready to burst with their congratulations!  Their purses of hoarded coins remained closed, and my bright heart grew weary at their stinginess.

In the language of traditional content owners today, nobles and great men stole Ferdowsi content.  They apparently provided attribution to Ferdowsi and even congratulated him. But Ferdowsi wanted material goods for his content.

that honorable man Hosayn Qotayb never asked for my works for nothing.  I received food and clothing , silver and gold from him, and it was he who gave me the will to continue.  I never had to worry about paying taxes and was able to wrap myself in my quilt in comfort….[1]

Ferdowsi continued the exchange with a direct reference,  “that honorable man Hosayn Qotayb.”  Over time, the Shahnameh became a popular, influential work.  It also came to be celebrated as a literary masterpiece.  Elites have invested heavily in the Shahnameh. Being named in it puts a person among kings.  That’s a status that usually cannot be bought for any price.  But neither Ferdowsi nor Qotayb knew at the time of the Shahnameh’s completion the actual value of this name-brand placement.

Ferdowsi, a word producer, extolled the value of words.  He concluded his account of Sekandar (Alexander the Great) thus:

[Alexander the Great was buried], and what remains of him now is the words we say about him.  He killed thirty-six kings, but look how much of the world remained in his grasp when he died.  He founded ten prosperous cities, and those cities are now reed beds.  He sought things that no man has ever sought, and what remains of him within the circle of the horizon is words, nothing more.  Words are the better portion, since they do not decay as an old building decays in the snow and rain.

Ferdowsi is exaggerating.  Some non-verbal effects of Alexander the Great endure.  Words in turn dissipate in various ways.[2]  Brains forget and die.  Books are thrown out; paper yellows and crumbles.  Web pages go 404.  The textual record of the Shahnameh itself has serious weaknesses.  A complete text of the Shahnameh is not well-attested back to Ferdowsi’s hand.

A huge number of words are continuously produced.  Communication is the preeminent sign of human life.  Reducing human life to a business is a treacherous endeavor. 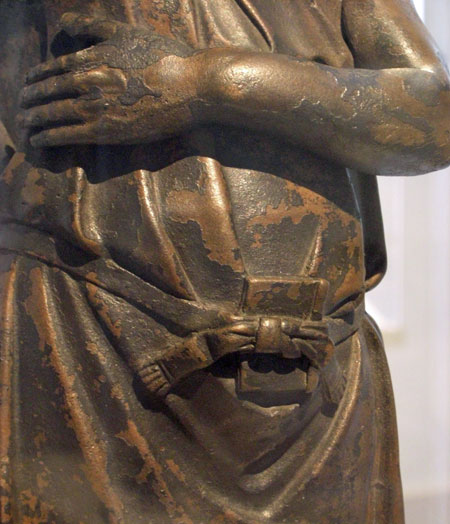 [1] The three Shahnameh quotations in this post are from Ferdawsi, trans. Dick Davis (2007), Shahnameh: the Persian book of kings (London: Penguin) pp. 853-4, 528.  Shahnama and Firdawsi are alternate transliterations of Shahnameh and Ferdawsi, respectively.  The Shahnameh includes frequent panegyric to Mahmud of Ghazneh.  Mahmud ruled the region in which Ferdowsi lived from 997 to 1010, the final 13 years in which Ferdawsi wrote the Shahnameh.  Ferdowsi’s literary service to Mahmud did not bring Ferdowsi a large royal payment.  Ferdowsi reportedly died embittered by his meager compensation.

[2] Ferdowsi constructed a verbal history of Sekandar (Alexander the Great) that differs significantly from other verbal sources. In the Shahnameh, Sekandar is the son of the Iranian king Darab.

A Hellenistic artisan, perhaps a sculptor, with wax tablets in his belt.  Wax tablets served as early notepads.  Sculpture ca. mid-1’st century BGC, held in the Metropolitan Museum of Art (1972.11.1).