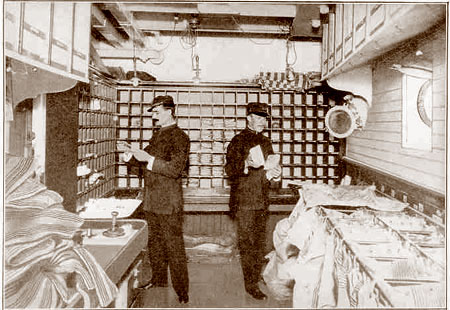 Among myths and misunderstandings of the Titanic’s sinking, particularly regrettable is the lack of appreciation for the Titanic’s postal clerks.  These five men devotedly sought to fulfill their job assignments, even to the point of their deaths:

During Titanic’s frantic final hours on April 15, 1912, Titanic’s postal clerks, along with steward Albert Theissinger and several others, desperately tried to save the 200 sacks of registered mail by dragging them to the upper decks and possible safety.  Theissinger was the only survivor to recall seeing the mail clerks alive.  When he finally abandoned the seemingly suicidal task, the five mail clerks — Americans Oscar Scott Woody, John Starr March, and William Logan Gwinn and British postal workers James Bertram Williamson and John Richard Jago Smith— were still frantically at work, sloshing waist-deep in freezing water.

All five postal clerk went down to their deaths with the sinking Leviathan.  Ship steward Albert Theissinger, who was not a government bureaucrat, abandoned the ship and survived.  He latter recounted, “I urged them to leave their work.  They shook their heads and continued at their work.”  Think of the Titanic’s postal clerks when you think of civil servants in countries experiencing dire government budgetary crises.

In other bureaucratic issues this month, Bill Adair wrote an excellent profile of “Tom Haueter, a bureaucrat who may have saved your life.”  Adair observes:

And one thing to keep in mind about bureaucracy: It can be a good thing. It can put the brakes on impulsive political responses and make sure agencies thoroughly consider the impact of their actions.

We concur wholeheartedly.  Bureaucrats have in fact saved the world.