Luxury goods or tourism typically aren’t considered a solid basis for the development of human society.  That’s only through the bias of thinking within empires and through the industrial machinery of modern nation-states.  The Sackler Gallery’s spectacular exhibit, Roads of Arabia: Archaeology and History of the Kingdom of Saudi Arabia, shows that trade in incense and travel to Islamic holy sites supported small, distinctive, culturally advanced societies in Arabia alongside of ancient empires, long before the discovery of oil. 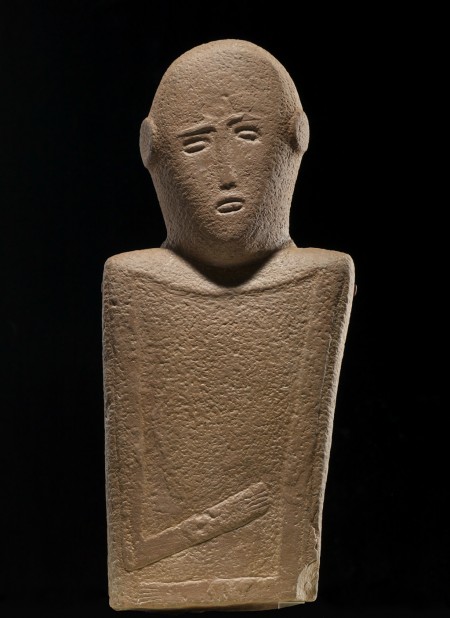 In the form of beautifully lit sandstone steles, distinctive and expressive persons living in Saudi Arabia about 6000 years ago welcome visitors to the first room of Roads of Arabia.  Little is known about the purpose of these steles and the societies that created them.  Roughly similar steles, known as hermae, were made in Greece about 3000 years later to serve as boundary markers and funerary monuments.  The Arabian steles don’t seem to represents kings or heroes.  The Arabian steles seems to represent a sense of self that cultural historians within the European intellectual tradition typically trace to a recent, few centuries of economic growth and political liberalization within a Judeo-Christian culture.  Roads of Arabia expands that self-consciousness enormously.

Roads of Arabia potentially revolutionizes understanding of human social organization.  The exhibit includes a stone sculpture apparently of a horse.  It was discovered within the last five years in al-Magar in north-central Saudi Arabia.  The al-Magar sculpture and related evidence suggests that domesticated horses existed in Arabia 9000 years ago.  The best recent research on horse domestication suggests that horses were first domesticated about 5500 years ago in the steppes of Ukraine and northwest Kazakhstan.[1]  The al-Magar horse sculpture, if scientifically validated, potentially implies a complete rethinking of the relationship between humans and horses, and a new history of human societies all across Asia for thousands of years.

Many’s the water-skin of all sorts of folk I have slung
by its strap over my shoulder, humble as can be, and humped it;
many’s the valley, bare as an ass’s belly, I’ve crossed,
a valley loud with the wolf howling like a many-bairned wastrel [2]

Roads of Arabia presents artifacts that should encourage a literary re-assessment of what’s known as Bedouin poetry.  At least since the cultural heights of the Abbasid caliphate, Bedouin poetry has been associated with an Arabian world of bucolic Bedouin, camels, campfires, and sand.  However, a roughly 2400-years-old stone pedestal or altar discovered in northern Hijaz (northeastern Saudi Arabia) includes iconography showing influence of high culture from Egypt to Persia.[3]

The people of pre-Islamic Arabia had broad cultural horizons.  About 2300 years ago, they carved exquisite, life-sized stone statues of men.  Those statues aren’t the sort of objects that a Bedouin would carry around the desert.  A girl buried just outside Thaj (east-central Saudi Arabia) about 1900 years ago was buried on a beautifully cast Hellenstic funerary bed.  She was dressed in a lavish custom and had a gold funerary mask.  She probably didn’t regularly lead a donkey to a well to fill animal skins with water for her camp.  Pre-Islamic oasis cities in the northern Hijaz had constructed wells, artificial lakes, dams, canals, and complex hydrological mechanisms.[4]  Bedouin poetry was probably primarily a literary conceit in the cosmopolitan, cultured world of Arabia that existed even prior to Islam.

The extensive economic and cultural development in Arabia occurred without strong, territorially extensive political control.  Tribes and cities in Arabia formed loose, shifting alliances.  Societies in Arabia developed not by exploiting a large expanse of secured territory, but via trade routes connecting incense sources and holy sites in Arabia to north Africa and Eurasia.  Incense and holy sites are much more closely related to symbolic systems and communication than are iron and oil.  Many leaders around the world today are pondering how to prosper in a new economy of communication networks.  Roads of Arabia shows a greatly under-appreciated ancient example of a vibrant society built upon communication and services.

Roads of Arabia: Archaeology and History of the Kingdom of Saudi Arabia is at the Sackler Gallery in Washington, DC, through Feb. 24, 2013.  The exhibit is beautifully lit and features a stunning, walk-through arrangement of tombstones of pilgrims to Mecca.  Associated with the physical exhibit is a extensive, well-constructed online exhibit.  While no substitute for seeing the artifacts in person, the online exhibit makes many images and much information from Roads of Arabia accessible world-wide.

[3] al-Hamra cube, from the al-Hamra Temple at Tayma, Saudia Arabia. A Christian bishop ordered a “Najrani {Christian} monk,” “one of the people of Najran,” to travel to India and China about 980.  Al-Nadim, Fihrist, trans. Dodge (1970) v. 2, p. 836.  Najran is a city in southern Arabia.  Christians from that city were deported to Kufa, just south of Baghdad, about 640.  Whether the Christian monk lived in Najran or merely maintained a historic affiliation with Najran, his assignment to travel to China suggests Arabia’s cosmopolitan position.

[image] Anthropomorphic stele; El-Maakir, Qaryat al-Kaafa, near Ha’il, Saudi Arabia, 4th millennium BCE; Sandstone; H x W: 57 x 27 cm; National Museum, Riyadh.  I’ve covered the non-original support for the stele with the black background to avoid its distraction.  The arrangement and lighting of the steles in the exhibit has a similar effect.