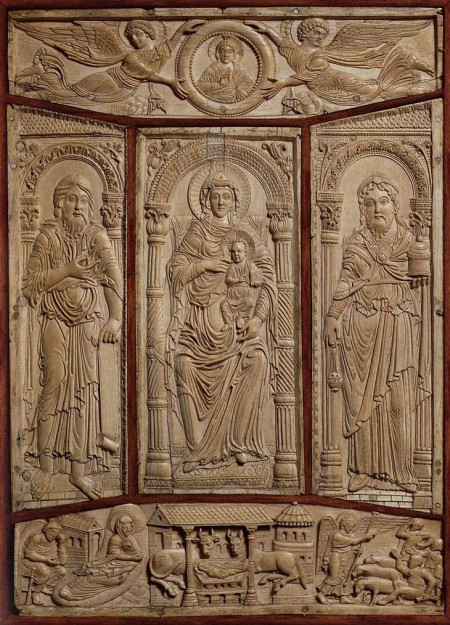 All these things you may learn in your zeal for research from the linen books, for he {Emperor Aurelian} gave instructions that in these all that he did each day should be written down.  I will arrange, moreover, that the Ulpian Library shall provide you with the linen books themselves. [2]

The biography of Tacitus states:

And now, lest any one consider that I have rashly put faith in some Greek or Latin writer, there is in the Ulpian Library, in the sixth case, an ivory book, in which is written out this decree of the senate, signed by Tacitus himself with his own hand.  For those decrees which pertained to the emperors were long inscribed in books of ivory. [3]

The translator of these texts notes, “the ‘ivory book’ is doubtless as fictitious as the ‘libri lintei‘ {linen book}.”[4]

Linen books and ivory books may well have existed in ancient Rome.  A fire in Rome about 192 destroyed many of Galen’s books.  According to an eleventh-century scholar in Cairo, Galen’s loss included “dearest to him — the books written on white silk, with black covers, for which he had paid a high price.”[5]  A bookshop owner in Baghdad in the tenth century stated:

The Greeks write on white silk, parchment, and other things, as well as on Egyptian scrolls and al-fulhan, which is the skin of wild asses. [6]

[1] From Jona Lendering’s description and analysis of the Historia Augusta.

[2] Historia Augusta, Life of Aurelian, 1.7, trans. David Magie (Loeb Classical Library). Licinius Macer is the only other source to attest to linen books in the Roman Empire.  Mehl (2011) p. 175.

[3] Id. Life of Tacitus, 8.1-2.  The references to linen and ivory books are realistic, i.e. the nature of the books doesn’t seem to be part of any verbal play.

[5] Al-Mubashshir ibn Fātik, quoted in HP p. 164.  Galen, On the Avoidance of Grief (trans. Rothschild and Thompson (2011)), describes the destruction of Galen’s library, but does not mention silk books.  Galen’s silk books may have been silk scrolls imported to Rome from China.

[7]  The ivory books alternatively may have been books with ivory covers.  One such cover from c. 810 is shown above. Of course books in the Ulpian Library in Rome prior to the fourth century would not have featured Christian iconography.