According to the Book of Daniel, the Babylonian King Belshazzar held a great feast for thousands of lords.  King Belshazzar and his lords proudly drank wine from the sacred gold and silver vessels that they had plundered from the temple at Jerusalem.  They praised gods made from gold, silver, bronze, iron, wood, and stone.  These were gods made from materials indiscriminately ranging from highly precious to most common.

But then a disembodied man’s hand appeared.  Its fingers wrote on the wall: “mene, mene, tekel, peres.”  Those Aramaic words represented measures of currency.  The Jewish captive Daniel interpreted those words for Balshazzar:

Mene, God has numbered the days of your kingdom and brought it to an end.  Tekel, you have been weighed in the balance and found wanting.  Peres, your kingdom is divided and given to the Medes and Persians. [1]

Daniel’s interpretation echoed the Egyptian weighing of the heart in an other-worldly judgment.  Belshazzar’s merit did not meet the required weight.  That very night, the Persians captured Babylon and killed Belshazzar.

The Cyrus Cylinder, now on exhibit at the Sackler Gallery, is a physical artifact interacting with Daniel’s story of Belshazzar.  The Cyrus Cylinder documents and legitimates the Persian King Cyrus’s conquest of Babylon without a battle about the time of King Belshazzar.[2]  The Cyrus Cylinder describes the bad deeds of the Babylonian king, declares Cyrus’s divine mandate to overthrow him, and records Cyrus’s order that peoples and their sacred objects (gods) be returned to their home places.  Both Hebrew scripture and classical Greek texts celebrate Cyrus as a great and just ruler who upheld within his vast Persian empire important freedoms.[3] 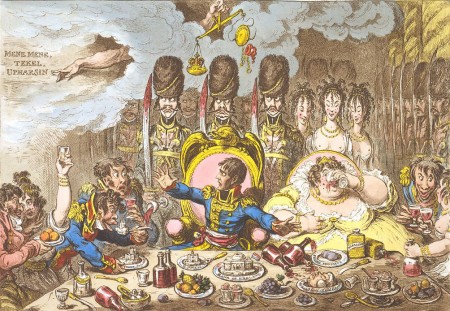 The form of writing helps to give it authority.  A disembodied hand writing on the wall isn’t the action of a human person.  It suggests the hand of god.  The Cyrus Cylinder’s cylindrical shape gives it the authority of a personal seal.  Persian kings used small cylindrical seals.[4]  Relative to a king’s seal, the football-sized Cyrus Cylinder is a monumental seal declaring Cyrus’s identity through his conquest of Babylon, his rebuilding of it, and his righteous behavior towards its residents and captives.  The Sackler exhibit includes fragments of Cyrus’s text from a contemporaneous tablet.  The Cyrus tablet surely served a less politically important communicative function than the Cyrus Cylinder.

The Cyrus Cylinder and Ancient Persia: A New Beginning is on display at the Sackler Gallery through April 28, 2013.  Neil MacGregor, Director of the British Museum, gave an excellent TED talk on the Cyrus Cylinder.  Here’s an English translation of the surviving Cyrus text.

[3] Isaiah 44:28-45:6, 2 Chronicles 36:20-23, Ezra 1:1-11, 6:3-5; Xenophon, Cyropaedia and its subsequent Greek admirers.  The surviving Cyrus text is similar to other Babylon decrees of conquest and rebuilding.  See Kuhrt (1983).  The ancient reputation of Cyrus, however, indicates that his actions were perceived as distinctive.  Thomas Jefferson’s library included two copies of Xenophon’s Cyropaedia.