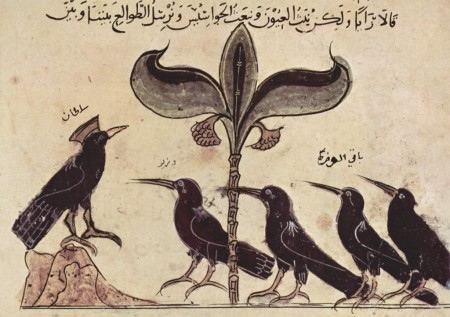 The scholars of India compiled the book of fables, Kalilah and Dimnah.  It contains the most elegant proverbs, parables and analogies.  Scholars from various schools, after long toil, brought out the best of their thoughts and embodied them in a most creative manner.  This culmination of their deep reflection expressed their wisdom in fables using animals as their main characters. [2]

The book of fables, Kalilah and Dimnah, is not written for entertainment only. … One ought not conclude that it is merely an assemblage of anecdotes about two animals [4]

Ibn al-Muqaffa described Kalilah and Dimnah as containing the best thoughts resulting from scholars’ long toil and deep reflections.  He urged intensive study of it:

According to ibn al-Muqaffa, success in reading Kalilah and Dimnah requires insight and comprehension:

Any persons who accumulates knowledge of the arts and sciences and spends his time reading books without patience and insight exhausts himself in vain. … A like frustration awaits anyone who reads this book of fables without comprehending both the apparent and implicit ideas within.  Such a reader will not benefit from the text on these pages, which offer no real value on their own except through the meaning they embody. … Reading Kalilah and Dimnah without insight will thus be time lost. [6]

Ibn al-Muqaffa’s introduction implicitly affirms that he understood the deep meanings of Kalilah and Dimnah.  Ibn al-Muqaffa thus positioned himself to serve as a tutor to a patron seeking to read it well.

Ibn al-Muqaffa described vaguely and abstractly the broad benefits of reading well Kalilah and Dimnah.  The benefits are as broad and vague as the appreciation of experience:

Whoever has learned from his own experience and that of others, and remembers and appreciates what he has learned, may appreciate these fables and take them to heart without knowing in advance how and when he will draw upon them.  He knows only that he has gained a variety of insights that could be useful at any opportune time. [7]

Ibn al-Muqaffa described the book as intended to appeal to everyone:

He who peruses this book should know that its intention is fourfold.  Firstly it was put into the mouths of dumb animals so that lighthearted youths might flock to read it and that their hearts be captivated by the rare ruses of the animals.  Secondly, it was intended to show the images of the animals in varieties of paints and colours so as to delight the hearts of princes, increase their pleasure, and also the degree of care which they would bestow on the work.  Thirdly, it was intended that the book be such that both kings and common folk should not cease to acquire it; that it might be repeatedly copied and re-created in the course of time thus giving work to the painter and copyist.  The fourth purpose of the work is to be of interest to philosophers in particular. [8]

According to the account of Borzuya’s journey to India, Borzuya produced Kalilah and Dimnah to provide immortality.  Ibn al-Muqaffa apparently added some additional chapters morally appealing from an Islamic perspective.  While illustrated books were well-known in Sassanian Persia, no direct evidence exists that Borzuya’s Kalilah and Dimnah was illustrated.  Illustrations help to make works popular.  Illustrations in Ibn al-Muqaffa’s version are consistent with his effort to make the work broadly appealing.[9]

[1] Borzuya produced the first, Middle-Persian version of Kalilah and Dimnah under Persian king Khosrau I (Anushirvan).  Anushirvan reigned from 531 to 579 GC.  Ibn al-Muqaffa was born to a noble Iranian family in Fars in 720 GC.  He died about 756.  He probably created his version of Kalilah and Dimnah about 750.  For the scant surviving biographical details about ibn al-Muqaffa, see the Encyclopedia of Islam.

[5] Id. pp. 35, 34. Ibn al-Muqaffa seems to have been aware of different styles of reading.  The difference between intensive and extensive reading now tends to be considered in relation to the proliferation of novels since the mid-18th century.

[9] The frequency and position of images in illustrated versions of Kalilah and Dimnah suggests that its most popular features were “rattling good yarns, sometimes laced with risqué elements (frequently explicitly illustrated in the manuscripts), which has always had most appeal.”  O’Kane (2003) p. 26.

[image] The King of the Crows conferring with his political advisors, from illustrated Arabic Kalilah and Dimnah manuscript dated c. 1210.  Bibliothèque Nationale, Paris, via Wikipedia.