An account of a public debate forms part of a late eighth-century Arabic book, Kitab Bilawhar wa-Budasf.  It was probably written within Ismaili culture in the central-Asian region of the early Abbasid caliphate.  Budasf is a figure adapted from stories of the historical Buddha.  Bilawhar is a hermit-master who instructs Budasf in the way of Buddha’s asceticism.  Budasf’s father, King Janaysar, strongly opposes Budasf leading an ascetic life.  Conflict between worldly life and ascetic life is personalized in the opposing views of father and son.  That conflict is also argued in a formal public debate.  In Kitab Bilawhar wa-Budasf, personal interaction is more meaningful and more effective than formal public debate in determining persons’ courses of life. 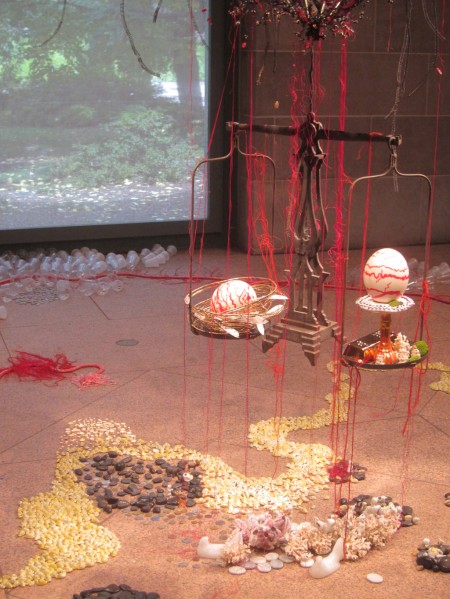 The formal public debate is merely a ploy in Kitab Bilawhar wa-Budasf.  King Janaysar’s dream-interpreter/magician/astrologer Rakis advises a two-pronged strategy to turn Budasf from ascetic life.  They will arrange a public debate with Bilawhar about the relative merits of ascetic and worldly life.  If that debate convinces Budasf not to follow ascetic life, then the debate will have achieved its purpose.  If not, then they will secretly eliminate Bilawhar and have Rakis appear in further public debate in disguise as Bilawhar.  Rakis in the figure of Bilawhar will renounce his former views and encourage Budasf to follow a worldly life.  In short, the King and his adviser rig the public debate to ensure their preferred outcome.

The pretextual nature of the public debate is publicly apparent.  After failing to find Bilawhar and compel him to participate in the debate, King Janaysar and Rakis move directly to the second part of their plan.  Rakis pretends to be the captured Bilawhar.  The King in public declares to Rakis, disguised as Bilawhar:

We will not put you to death before arguing against you.  If you resolve to return to the world, we will give you leave. If you refuse to do this, we will show the people your error, and we will inflict on you both the worst of punishments and the most excruciating of deaths. [1]

King Janaysar does not propose a free, fair public debate about the merits of ascetic and worldly lives.  He proposes a show trial with only one right answer.

King Janaysar pretends to modify the character of the debate in response to personal dialog between him and his son.  After Budasf urges his father to study with him the ascetic way and the arguments for it, Janaysar says to Budasf:

Your words have pleased me and attracted me.  But I think I should not forgo studying them attentively and examining them.  If they are true, thorough examination will only augment their certitude.  If they are false, it will make apparent their deceit.  How I desire that we would be of one belief, you and I!  I will call the people and order the royal high-priests to prepare. I will announce to the ascetics that they have my protection, and that I permit them to attend this assembly, to defend their doctrine, and to support Bilawhar, who is their head and the leader of their religion, {and who will argue on its behalf} unless you think this should be entrusted to another: in that case, designate who you want.  On my part, I think that all this should be made a grand day, in public, so that, regarding this matter, no one will go say and criticize and imagine that an argument that has escaped us, but that he holds, would have given us the victory, if we had presented it, and so the people of your religion don’t go imagining the same thing.  Thus the people will allow themselves to be better convinced of the outcome of the debate. [2]

Janaysar’s words reveal well-developed understanding of the value of public debate.  Janaysar’s words also are duplicitous.  Janaysar changes only his description of the debate.  The debate remains rigged with Rakis participating in disguise as Bilawhar.

The King dramatically heightens the stakes of the debate.  Before the start of the debate, King Janaysar publicly declares to his high-priests that if they convince the people of the reasonableness of their doctrine, they will be greatly rewarded.  If their doctrine is revealed to be erroneous, the King declares that no one could be more culpable toward the people and more perfidious toward him.  He then makes a solemn vow to God.  If his priests’ doctrines are shown to be erroneous, the King will abandon his throne, shave his head, and burn the established idols.  He will also kill the priests, take captive the priests’ spouses, make their children slaves, and hang the priests’ bodies on crucifixes.  The King evidently makes these extreme vows because he has great confidence that his view, which his priests represent, will prevail.

By praising and then imitating the King’s extreme vow, Budasf undermines the rigged debate.  Budasf vows to tear out Bilawhar’s heart and tongue and throw it to the dogs if Bilawhar loses the debate.  That unexpected development traps Rakis, disguised as Bilawhar.  If he renounces Bilawhar’s doctrine and loses the debate, then Budasf will dismember him.  If Rakis doesn’t renounce Bilawhar’s doctrine, then he will have betrayed his secret plot with the King and will face the King’s wrath.

Rakis wavers in the face of this dilemma.  The public debate goes on for a long time.  Rakis seems to be prevailing.  But then the King, enraged, enters the debate himself.  He argues eloquently against Rakis.  The high priests find additional strength, arguing together with the King.  Rakis retreats.  At the end of the day, the weight of the arguments are balanced, but the King is raging against Rakis.

Budasf, apparently recognizing Rakis and hoping for his conversion, intervenes to protect him.  Budasf praises the King’s fairness and justice.  Budasf then proposes that each side agree to embrace, support, and protect its respective standard-bearer, or the opposing standard-bearer.  The King, still hoping that Rakis will come through in converting Budasf, agrees to have each side embrace its own standard-bearer.  The public debate thus ends in the position in which it began.

In contrast to the duplicitous and ineffectual public debate, actual change in beliefs occurs through personal interactions.  Budasf engages in lengthy dialog with his father.  That dialog ultimately leads the father to adopt his son’s ascetic beliefs.[3]  Rakis adopts Budasf’s ascetic beliefs after a midnight, personal conversation with Budasf.  The Old Persian ascetic Bahwan adopts Budasf’s ascetic beliefs after a long personal dialog with him.  These results of personal persuasion contrast sharply with the results of the public debate.  Skepticism about the value of public debate seems to be an underlying theme of Kitab Bilawhar wa-Budasf.

choose some learned exponent of your religion, and let us hold a formal disputation together concerning the true faith, until truth has been distinguished from falsehood [4]

The late tenth-century Greek adaptation of the Georgian-Christian version greatly expanded the public debate by inserting into it the lengthy, second-century Apology of Aristides.  It also added a planned continuation of the debate on the following day.[5]

[3] That dialog involved frank speaking.  Budasf explained to his father:

we have expressed ourself severely to you {nous t’avons manifesté cette dureté}, by which we only wanted to show our respect for you, because those who lie to you do not respect you and are not your real friends.

Id. p. 175.  Ibn al-Muqaffa engaged in treacherous public discussion by means of fables in his Arabic adaptation of Kalilah and Dimnah.  See London (2008).  Both Burzuya’s mid-sixth-century Persian Kalilah and Dimnah and ibn al-Muqaffa’s mid-eighth-century Arabic version included a Buddhist fable, “The King and his Eight Dreams.”  That fable is based on the Buddhist legend of King Canda Pradyota.  See Blois (1990) p. 13.  The sage who advises the king in that fable is Bilar, apparently a variant of the name Bilawhar. Kitab Bilawhar wa-Budasf included ibn al-Muqaffa’s Arabic text for the fable “Man in the Well,” as well as other Arabic text from ibn al-Muqaffa’s version of Kalilah and Dimnah.  Id. Ch. 5.  This textual relationship underscores that Kitab Bilawhar wa-Budasf is concerned about means of communicating across differences in political power.

[4] Balavariani, from Georgian trans. Lang (1966) p. 136.  In this work, Budasf becomes lodasaph; King Janaysar, King Abenes; and Bilawhar, Balahvar.  In Kitab Bilawhar wa-Budasf, Budasf follows the doctrines of Budd (Buddha) against those of his father, which seem to be implicitly Zoroastrian.  In the Balavariani, Iodasaph is a Christian, and his father is an “idol-worshipper.”  Idol-worshipper was what Christians called person now called Buddhists.  In the Georgian-Christian text, the King and Rakis’ public-debate plot assumes that Bilawhar will be defeated if he actually participates in the debate.  It thus seems to assume essentially a show trial.  In Kitab Bilawhar wa-Budasf, the scheme is to eliminate Bilawhar if he seems to be winning.  The Georgian Christian adaptation has another person, Nakhor, act in disguise as Bilawhar / Balahvar. Nakhor “dwells outside in the wilderness.”  That makes his ability to act as Balahvar more plausible.  More general interpretations of these differences in the public debate aren’t clear.

[6] The Mihna, which occurred about 833-848, was high-stakes public questioning and debate about particular religious issues.  On the Mihna, see, e.g. Hurvitz (2001).  Political power in early medieval Europe was more diffuse than political power in the early Abbasid caliphate, and intellectual life was less developed.

[image] My photograph of Rina Banerjee’s site-specific installation Perspectives, at the Sackler Gallery through June 8, 2014.