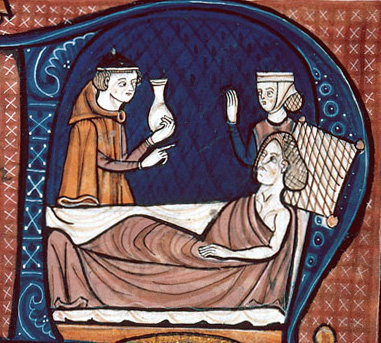 Early Islamic rulers were suspicious of physicians’ knowledge even while they drew upon well-developed medical knowledge from major Eurasian civilizations.  The Arabic book Sirr al-Asrar, probably compiled about the mid-eighth century in Baghdad, describes a ruler’s cosmopolitan council of physicians:

It is written in an ancient book that a certain king called together the physicians of Rum {the Roman Empire}, India, and Persia, and ordered them to name some medicine whose habitual use would be beneficial and curative for all sorts of complaints. What the Rumi chose and advised was the drinking of drafts of hot water every morning.  The Persian sage advised al-Harfa, that is, cress.  And the Indian advised Indian Myrobalan. [1]

Subsequent text says nothing about the effects of these treatments or which medicine the ruler chose.  The point of citing disagreement among cosmopolitan physician-sages seems to be skepticism of physicians and medical knowledge.  Another passage in Sirr al-Asrar declares:

Beware of poisons, for many kings have lost their lives by them.  And, in taking medicine, do not trust to one physician, for a single man is liable to be seduced.  If possible have ten physicians, and take the medicine regarding the use of which they all agree.  Your medicines should be prepared in the presence of all your physicians, as well as of one of your own trusty servants who understands medicines and knows the method of compounding and weighing them.

This strategy for managing royal physicians indicates underdeveloped public knowledge and poor ability to adjudicate conflicting knowledge claims.  Consensus, rather than convincing reasoning or a credible record of observable results, determines the best medicine.  Non-professional monitoring of the physicians (the job of the “trusty servant”) and fear of poisoning further underscores suspicion of physicians.[2]

This is, O Alexander, what will make you independent of every physician if you understand its meanings and find out its virtues. [3]

you should consult my book on compound medicines, and drinks, oils, and ointments, according to the Schools of Rome, India, Persia, and Greece, and what I have found out from my own experience and my knowledge; there is no need to repeat them here. But since I have decided to reveal to you every secret that I know, I will not hide from you the medicine which is known as the “guard,” “the mysterious treasure of the sage.”  I do not know who discovered it first.  Some say it was revealed to Adam.

Topping the established tradition of seven sages of the ancient world, the text attributes this medicine to the “eight Great Sages.”  Much like the seven sages, the eight sages have obscure, inconsistent, ancient names.[4]  The medicine itself has eight parts.  Each part requires a complicated preparation of ingredients, including ones from China and the Far East Spice Islands.[5]  The advice for avoiding physicians seems to be a rhetorical ploy for displaying the extent of physicians’ knowledge and expertise.

wonderful things of the mysteries of leechcraft, of what expels poisons without requiring the aid of a physician, and many similar useful things [6]

I have therefore decided to set down for you in this chapter some of the strange secrets of leechcraft, which if you will observe and adhere to them, it is not necessary for a king to show all his maladies to the leech, and you shall have no need for a leech except in those rare occurrences which no man may eschew.

The text then provides complicated advice about diet, exercise, and personal hygiene, keyed to seasons and astrological signs.  The text claims to offer knowledge to replace a leech except in rare circumstances.  Yet a king does not need to engage in self-treatment to reduce medical costs or to deal with the unavailability of medical care.  If the leech’s knowledge is credible, then the king has no reason not to summon the leech.  Advice for avoiding leeches appears to be a means to display knowledge of leechcraft.

Sirr al-Asrar’s title in English is Secret of Secrets.  Manuscripts of it were frequently copied and widely disseminated in western Eurasia through the sixteenth century.  “Secret” display of knowledge is a gambit for knowledge authority without reasoned public accountability.  Suspicion of medical knowledge was factually reasonable in the ancient world even just on the evidence of rhetoric.

[2] While advice in European descendents of Sirr al-Asrar shifted from having five counselors to having only one, the advice about having multiple physicians was not similarly transformed.  Immediately after the advice to employ ten physicians is a legend of Aristotle saving Alexander the Great from a visha kanya (poison girl):

Remember the mother of the Indian king who sent to you some presents, one of which was a girl who had been brought up on poison until her nature had become that of poisonous serpents.  And if I had not found it out through my knowledge of the Indian kings and physicians, and had not suspected her to be capable of inflicting a fatal bite, surely she would have killed you.

Id. p. 192.  This story is best understood as emphasizing the danger of poisons and the authority of Aristotle, not the value of physicians in general. The story of the poison maiden subsequently spread throughout Europe. It occurs as Tale 11 in Gesta Romanorum, from Latin trans. Swan & Hooper (1876) pp. 21-2; and as Tale 93 (“Poison Maiden”) in the Anglo-Latin Gesta Romanorum, ed. and trans. Bright (2019). In the later, the “Queen of the North {regina aquilonis}” nourished her daughter on poison from birth and then sent her to Alexander to be his concubine. Aristotle’s wisdom again saved Alexander’s life.

[6] Id. p. 180, ft. 2, manuscript Laud. Or. 210 (W).  The subsequent quote is from the same manuscript, id. p. 195,  ft. 1.  The distinction between “leechcraft” and “aid of physician” may reflect a knowledge hierarchy from folk medicine to scholarly medicine. However, scholarly physicians practiced bloodletting.  Moreover, the point of Sirr al-Asrar was not to shift the king’s attention from physicians to leeches.