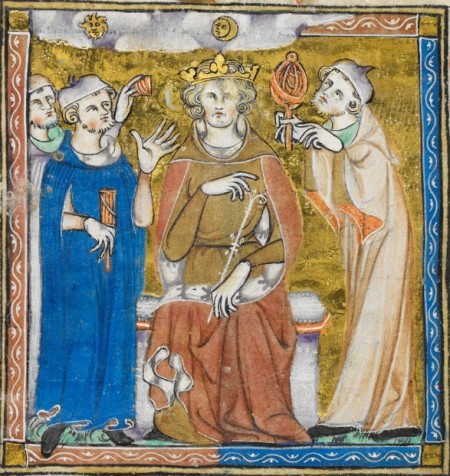 Study of astral signs had intellectual credibility and professional importance in the early Islamic world.  Measuring and predicting positions of celestial bodies was a highly respected field of knowledge.  That field is now known as the science of astronomy.  The Arab rulers and scholarly elites believed that the position of the moon and stars was crucial to the success of medical treatments.  Such claims, which supported a lucrative practice of medicine, are now associated with the pseudo-science of medical astrology. In the Islamic world, careful empirical study and the interest of patrons in medical treatment drove study of astral signs to a high level of intellectual and professional development. Secret of Secrets conveyed astral-based advice from the Islamic world to less developed medieval Europe.

Secret of Secrets raised concerns about credible beliefs among some scholars in late thirteenth century Europe.  In his translation of Secret of Secrets from Latin into French about 1300, Paris-based Dominican Jofroi of Waterford used the term astronomy in Secret of Secrets‘ defense of of the physiological significance of the positions of the moon and stars.  Jofroi probably supported Isidore of Seville’s distinction between astronomy and astrology:

There is a difference between astronomy and astrology.  Astronomy consists of the turning of the sky, the rise, setting and movement of the stars, and why they were named.  Astrology is partly of the natural world, and partly superstitious.  It is part of nature when it follows the course of the sun and moon, or the placement of the stars in certain seasons.  Superstition is when the astrologers make predictions by the stars, arrange the twelve signs of the sky through each part of the body and soul, and attempt to predict the birth and characteristics of human beings by the course of the constellations. [1]

Jofroi excised from Secret of Secrets material on alchemy, magic substances, and astrology.  He explained that such stuff is “more like fable than truth or philosophy, and all clerks who understand Latin well know this.”[2]  The stories of the weaver and the Indian king’s sons were moved from the section on choosing counselors to the section of physiognomy.[3]  Those stories are very much like fables.  Fables, like the term astrology, evidently lessened credibility within thirteenth-century European scholastic circles.

To support Secret of Secrets’ astral-based advice, a medieval European recension added rhetorical arguments.  James Yonge translated Jofroi’s French into English in Dublin in 1422.  Compared to its Arabic source, the Jofroi-Yonge recension added the authority of Galen and Isidore of Seville in defense of astronomy:

As Galen the very wise physician says and Isidore the good scholar witnesses, a man may not perfectly know the science and craft of medicine unless he is an astronomer.  Therefore you will do nothing, and namely that which pertains to the keeping of your body, without the counsel of astronomers. [4]

That’s a highly generic argument from authority for medical astrology-astronomy.  Compared to its Arabic source, the Jofroi-Yonge recension supported the physiological significance of celestial bodies’ positions by describing the effect of the moon on the sea.  It generalized that effect to all animals having the nature of water:

The sea moves and it withdraws according to the moving, growing, and decreasing of the moon that has mastery and lordship upon the water and upon all things that have the nature of water.  Therefore, oysters and crabs, the brain and marrow of all beasts, increase and decrease after the moon. [5]

Putting in series oysters, crabs, and the brain and marrow of all beasts makes sense only in attempting to connect rhetorically the sea to general animal physiology.  Concern that this effect is not readily apparent in a cup of water doesn’t matter to such an exercise.  Essentially following the Arabic source, the Jofroi-Yonge recension declared:

it well seems that those men are great fools that say that science and judgment of stars is not profitable to know since by them a man may better understand diverse perils and shun harm by knowledge and foresight.  However, as much as the knowledge of a man is not sufficient without the help of God, the sovereign remedy against all harm and suffering is to pray to God almighty that He, for His great mercy, would turn harm into good, for His power is not made less, defiled, or disturbed by the virtues of the stars.

That claim was highly popular in medieval Europe.[6]  The Jofroi-Yonge recension added to that argument for prayer a medieval European sense of sinfulness and hope:

And if we so do, we may have hope that He will deliver us from that harm that we have well deserved.[7]

In thirteenth-century Europe, weaknesses in the credibility of Secret of Secrets‘ astral-based advice prompted rhetorical, not substantial, revisions.

Secret of Secrets’ astral-based advice had a sound foundation in underlying interests.  Eating, sleeping, drinking, having sex, and curing illnesses and ailments are perennially propitious areas for offering advice.  Secret of Secrets claimed to provide up-market advice with authority of Aristotle and Islamic learning.  Faithful looking to God see stars.  Scholars have long studied the movement of the stars.  Secret of Secrets’ astral-based advice was too well-positioned to be consigned to the realm of superstition.

[1] Isidore of Seville, Etymologies, III.27, from Latin trans. Throop (2005).  Isidore’s distinction between astronomy and astrology was not, in my view, consistently maintained in subsequent literature.  Fluidity in use of the terms is apparent in the biographies of physicians in the early Islamic world; Asaph the Physician’s roughly tenth-century Hebrew Book of Medicines and David ben Yom Tov’s fourteenth-century Hebrew Kelal Qatan; and in the writing and profession of Petrus Afonsi in twelfth-century Spain.  With respect to Roger Bacon in thirteenth-century Europe:

Bacon himself uses the word Astrology in the most general sense, as the whole body of knowledge concerning the stars, subdividing it into judiciary and operative Astronomy.

[2] O’Byrne (2012) p. 52.  Philip of Tripoli translated the Arabic source of Secret of Secrets into Latin about 1230.  Jofroi of Waterford (Geoffrey of Waterford) used primarily Philip’s Latin translation.  On Jofroi’s revisions of Philip’s text, see Williams (2003) Ch. 7.  Jofroi also drew upon Barthélemy de Messine’s translation (from Greek to Latin) of a pseudo-Aristotelian text on physiognomy.  Monfrin (1964).  Jofroi’s text has not been published.  Jofroi entitled Ch. 31 “Que astrenomie est necessaire a la garde du cors (That astronomy is necessary for the keeping of the body).” O’Byrne (2012) p. 65, Table 1.1.  That chapter corresponds to the chapter in Yonge’s text (Ch. 39) that cites Galen and links “the science and judgment of stars” to prayer.

[3] Id. p. 63, suggesting that Jofroi moved the stories rather than Yonge.  Jofroi, associating with Parisian scholastics, seems to be the more likely party to have reduced the profile of astrology in Secret of Secrets.  The stories were moved to Ch. 55.

Kerns, Lin, trans. 2008. The secret of secrets (Secreta secretorum): a modern translation, with introduction, of The governance of princes. Lewiston: Edwin Mellen Press.