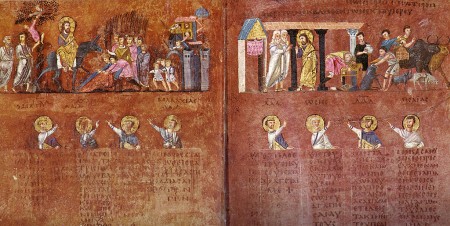 In Rome in 385 the Christian scholar Jerome offered advice to his student, the well-born maiden Eustochium.  Jerome condemned the ostentatious practices of elite Roman Christian women:

Today you may see women cramming their wardrobes with dresses, changing their gowns from day to day, and for all that unable to vanquish the moths.  Now and then one more scrupulous wears out a single dress; yet, while she appears in rags, her boxes are full.  Parchments are dyed purple, gold is melted into lettering, manuscripts are decked with jewels, while Christ lies at the door naked and dying.[1]

In mid-ninth-century Baghdad, the celebrated translator Hunayn ibn Ishaq referred to luxurious Greek books.  He described these books as containing portraits of philosophers in illustrations and words.  Hunayn described the books as:

works of the ancients in letters of purple, which is a red colour like wine, written with gold and silver, and letters written in gold, and designs written in other colours.  … Till the present day the Greeks {Byzantines} do this with their books and psalters, writing (them) with gold and silver in letters of these colours, with a picture of the wise man represented at the beginning. [2]

The reference to “letters of purple” is probably a corruption of pages of purple.  Hunayn plausibly was referring to purple-parchment books like those to which Jerome referred and like the purple-parchment codices that have survived from the sixth century.

In Spain about 1130, John of Seville included a mythic history in the introduction to his translation of Secret of Secrets from Arabic.  John of Seville described a certain translator searching for the book of Aristotle’s advice to Alexander the Great.  The translator searched among temples and philosophers.  He arrived at a temple of Hermes at which the sun was venerated.  There the translator attached himself to a learned old man.  After long entreaties, the old man finally revealed the book that the translator sought.  According to John, the book was written in gold letters.  Surviving Arabic manuscripts of Secret of Secrets do not mention gold lettering.[3]  Perhaps John added that detail based on his experience of sumptuous books.

Not only ideas traveled from ancient Rome to early Islamic Baghdad to early medieval Spain.  The specific physical form of sumptuous books was also communicated across large expanses of time and space.

Let those who want them have antique volumes, or books written on purple parchment in gold and silver ink, or in what the vulgar call “inch-high” letters, so that they are burdens rather than books, so long as they let me and mine have our wretched pamphlets and our copies not so much beautified, as corrected.

[3] The Latin text and an English translation of John of Seville’s introduction is available in Williams (2003) Appendix 1.  John does not give the Arabic translator’s name:  “This book a certain translator, by the command of his emperor, sought with much effort.”  Id. p. 357. Surviving Arabic manuscripts of Secret of Secrets name the translator Yuhanna ibn al-Batrik (lived c. 750 – 815).  They also typically describe the philosopher Aesculapius as having built the temple.  Secret of Secrets, from Arabic trans. Ali (1920) p. 177.

[image] The parable of the Good Samaritan, folio 7v from the Rossano Gospels (6th century),

Dunlop, D. M. 1952.  “The Dīwān Attributed to Ibn Bājjah (Avempace).” Bulletin of the School of Oriental and African Studies, University of London, Vol. 14,No. 3, Studies Presented to Vladimir Minorsky by His Colleagues and Friends, pp. 463-477.

Williams, Megan Hale. 2006. The monk and the book: Jerome and the making of Christian scholarship. Chicago: University of Chicago Press.