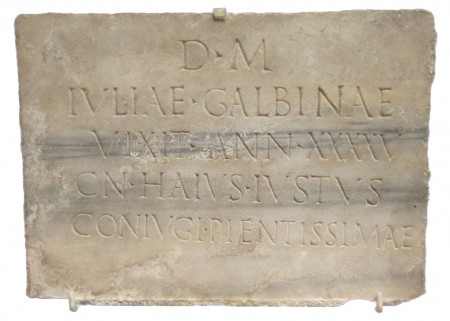 Above is a photograph of a Roman epitaph from the second century GC.  Translated from Latin, it states: “To the sacred memory of Julia Galbina; she lived 45 years. Gnaeus Haius Iustus, to his most devoted wife.”

In the U.S. in 1790, expected lifespan at birth was 44 years for white females and white males.  Now it’s 79 years for females and 74 years for males.  You can now expect to live longer than Julia Galbina.  But will you be remembered 1800 years from now?

[image] My photograph of marble stone on display at the Portland Art Museum.  Sally Lewis Collection of Classical Antiquities 26.68.