The second-century physician Galen wrote a massive corpus of scholarly works.  These texts shaped medicine in western Eurasia for more than a millennium.  Along with prodigious scholarly work, Galen was also a physician in bloody, strenuous, and difficult engagements with living bodies in anatomical displays and patient care.

As a young physician in his hometown of Pergamum, Galen performed anatomical displays.  Galen disemboweled a living monkey, emptied its intestines, and then challenged observing physicians to replace the intestines.  According to Galen, none stepped forward to do so.  Galen then surmounted the challenge himself.  Galen similarly would sever a monkey’s artery and challenge rival physicians to stop the bleeding.  Galen would demonstrate that, unlike other physicians, he knew how to stop the bleeding.[1]

At the age of twenty-seven, Galen in 157 was appointed physician to the gladiators in Pergamum.  Just like players in major-league team sports today, gladiators were valuable assets to their promoter-owners.  Galen made ointments and bandages for gladiators’ wounds.  He himself applied and monitored daily the wound treatments.  He sutured deep-tissue wounds and performed abdominal surgery on gladiators.  Galen’s care for the gladiators was much more successful than that of his predecessors.  He served five successive terms as physician to the Pergamum gladiators through the year 161.[2]  Galen subsequently left for Rome.  Rome offered a successful and ambitious physician much greater opportunity for achievement.

“the finest nerves, a pair of them like hairs,” as he writes, proud of his ability to locate minute anatomical structures.  They were his own discovery, unknown to his predecessors, and he also emphasizes the startling power of these delicate threads: for when they were cut, they would silence the animal without damaging it in any other way. [3]

By ligating the laryngeal nerve with needle and thread, Galen could silence and restore the animal’s voice at will.  In the ancient world, oratory was a primary source of public power.  Galen demonstrated that he could exert precise control over voice.

Galen performed many other types of difficult, bloody anatomical displays.  He vivisected pregnant goats and displayed the fetus breathing and moving.  He cut open living animals’ skulls and showed how pressing on different areas of the brain would change the animals’ physical capabilities, e.g. blind it.  He also cut open living animals to show their beating heart.  He would show that the animal could run, eat, and drink while having its beating heart exposed to view.[4]

Galen’s anatomical displays helped him to provide care for patients.  In one case, a slave boy of Maryllus the mime-writer suffered a wrestling injury.  An abscess formed in the boy’s sternum. After several months, the boy was in danger of death:

Maryllus called together several physicians, including Galen, to consult on the case.  They all agreed that the affected part of the sternum needed to be cut out; no one, however, dared to perform the operation, knowing that the slightest error would result in catastrophic perforation of the pleural membrane.  But Galen had vivisected hundreds of animals.  He had held their beating hearts in his fingers.

The operation went well at first — the infection had spared the veins and arteries around the wound — but when Galen removed the affected bone, he saw, to his despair, that part of the pericardium beneath had putrefied and disintegrated, forcing him to excise it.  Then, “we saw the heart as clearly as we see it when we deliberately lay it bare during {animal} dissection.” [5]

The boy recovered and subsequently lived for many years. Galen probably performed the operation without the use of anesthesia. 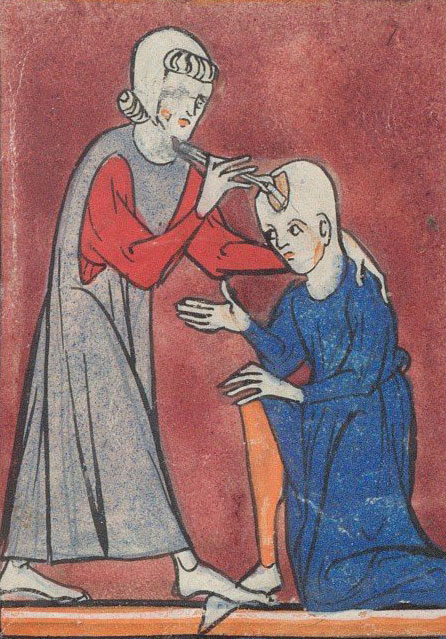 Despite the energy he devoted to dissecting, writing, and showing off, Galen never lost sight of the idea that medicine is about treating patients; and he treated all kinds of patients.  His anecdotes, although personal in tone, betray barely a hint of condescension toward any patient except for one silly rich man.  He would root around in a farmer’s yard for a suitable ingredient for a plaster.  He would wheedle information from a chambermaid if it helped him to make a better diagnosis.  He would perform insanely risky surgery on the slim chance of saving a slave boy’s life, with professional disgrace as the price of failure. [6]

Galen, like Paul of Tarsus, was both a highly learned thinker and a person passionately involved in ordinary life.

[1] Mattern (2013) pp. 83-4.  By today’s standards, Galen’s anatomical displays involved grotesque cruelty to animals.  But in the Roman Empire, watching gladiators grievously wound or kill each other was a popular activity.  Galen’s treatment of animals wasn’t much crueler than prevalent treatment of humans in his time and place.

[4] Id. pp. 142-4.  These anatomical displays involved flailing animals, cries of pain, and flows of blood.  They were sensually the elite equivalent of gladiator shows.