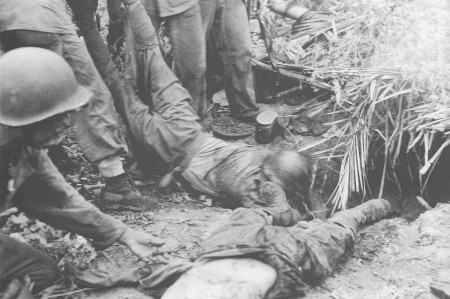 The over-all sex ratio of killings of humans in the U.S. today is similar to that among chimpanzees. Across many years of observing chimpanzee communities, inter-communal chimp killings (observed and inferred) of weaned victims comprised 32 males and 8 females.[2] The sex ratio of victims in chimpanzee killings (four males per female) is nearly the same as that among human adults killed by interpersonal violence within the U.S. Males are highly disproportionately represented among adults killed among both humans and chimpanzees.

Compared to chimpanzees, inter-communal human killings are strongly skewed toward adult males. Within the U.S., about 4 men are killed per woman killed. Among U.S. military personnel on active duty, about 40 men are killed per woman killed. Accounting for the persons that U.S. military personnel kill would probably raise the relative prevalence of killing men even higher.[5] The sex ratio of humans killed differs greatly for inter-communal killings relative to intra-communal killings.

A simple, adaptive explanation of killings is that “killing is a means to eliminate rivals when the costs of killing are low.” Within a community, more individuals are more exposed to each other and more directly rivals. On the other hand, killings within a community undermine the social solidarity and trust necessary for communal living. Adult males tend to be more vigorous rivals with each other for sexual opportunities. Adult females are more vigorous rivals with each other for opportunities to have resources transferred to them. The simple, adaptive explanation doesn’t go far toward explaining the intra-communal / inter-communal killing distribution, the killing sex ratio, and the relationship between the two.[6]

Humans are highly skilled in deluding themselves about objective realities of violence.  Consider these incontestable facts for the U.S.:

Humans seem socially incapable of bringing to reason these basic facts about killing humans. Complex social dynamics seem to shape both killings of humans and social understanding of those killings.

[1] John Horgan at Scientific American’s Cross-Check has hosted a tedious dialogue about the question:

Is chimpanzee violence a product of nature or nurture? Genes or environment?

Nature and nurture are intimately related. The expression of genes depends on the environment. The environment, social interaction, and nurture depend on genes. The construct “nature or nurture” is an ideological construct useful for mobilizing political instincts and seeking attention in mass media. It’s intellectually worthless.

Whether human impact is prompting chimpanzees to kill each other is an interesting scientific question. Wilson et al. (2014) provides good reason to think that human impact has had little to do with chimpanzees killing each other (see also additional explanation). However, the vast majority of book and magazine readers believe strongly that humans should lessen their impact on surviving chimpanzee and bonobo populations.  Associating unattractive events (killings) with human impact, like describing males as demonic, is a compelling content-marketing strategy.

[5] On Sept. 30, 2008, 14.3% of active duty military personnel were female. Adjusting for this active duty sex share, the death rate for men is 6.7 times higher than for women. Willingness to serve on active duty in the U.S. volunteer/paid military is behaviorally significant and sex differentiated.

[6] The quoted definition of the adaptive explanation (“adaptive hypothesis”) is from Wilson et al. (2014) p. 416.  Id. notes, “chimpanzees could potentially attack members of their own community on a daily basis, but rarely encounter members of other communities.” That makes the chimpanzee intra-communal /inter-communal killing distribution all the more remarkable relative to the U.S. today. Wrangham, Wilson & Muller (2006), which compares chimpanzees to human subsistence societies, offers little insight into the intra-communal /inter-communal killing distribution and the killing sex ratio for adults.